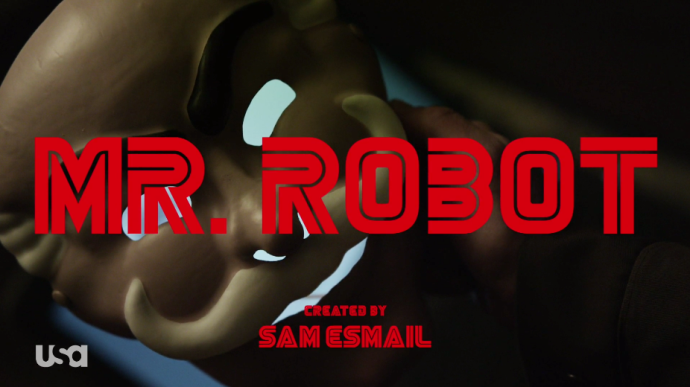 DISCLAIMER: This post contains spoilers for Seasons 1 and 2 of Mr. Robot (USA).

Mr. Robot follows Egyptian-American Elliot Alderson (Rami Malek), a brilliant yet flawed computer programmer living in New York City who moonlights as a notorious hacker for the fsociety group. It’s a show with real-time stakes and a penchant for blending fiction with our shared reality and technologically-rich and dependent culture.

As I scrolled through think pieces from Forbes to PC Magazine to Vulture to The Ringer, deeply drawn to Mr. Robot’s near-perfect portrayal of computer hardware, software engineering, and cyber criminology, it was easy to feel lost in a show that rivals the intensity of all shows.

First off, I am 100 percent behind Mr. Robot. I think it’s a wonderfully orchestrated drama with ‘holy shit’ acting talent, and atmospheric energy born from the mind of producer-writer-director Sam Esmail. The scenes are masterfully constructed and many sequences (like Elliott’s Adderall binge or dinner dream) could be stand-alone short films worthy of awards. Most conversations in the show are framed by medium shots, but Esmail puts the speaker in the corner of your screen. This technique spliced with two-shots, sets up a constant, unsettling tension. Also, placing two frames in sequence nearly forms a rectangular Venn Diagram and hints at an established closeness or similarity between characters with conflicting viewpoints. This is used very effectively in dialogical scenes where one character is trying to persuade another to their point of view.

This is punctuated perfectly by Ray (Craig Robinson) delivering the perfect corollary summary of Elliot’s attempt to curb his mental illness, which might as well serve as fsociety’s motto: “Control is about as real as a unicorn taking a leak at the end of a double rainbow.” 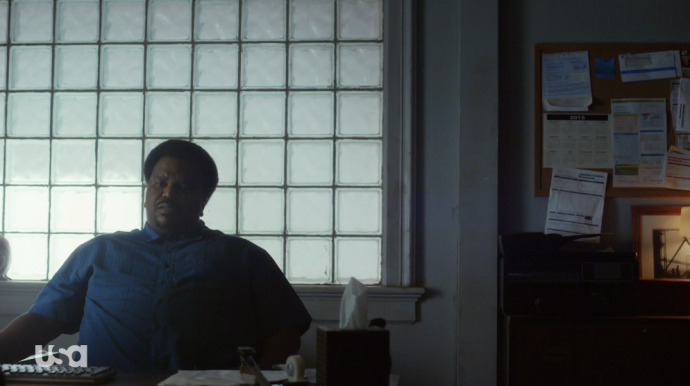 I naturally started to think about how, at its core, Mr. Robot depicts upper class strife and the illusion of control. The battle between disenfranchised white-collar workers buying into a system that has no qualms of revealing its mean-spirited, capitalistic intentions. It’s entertainment inspired by Chuck Palahniuk’s Fight Club and the Occupy Wall Street movement. But instead of mocking hyper-masculinity and self-help groups with protagonists hitting (and mostly embracing) rock bottom, there’s more at stake in the aftermath of Elliott and fsociey’s cyber coup of E Corp (affectionately nickname Evil Corp by the hackers) than bruised male egos.

The brilliant first season of Mr. Robot pushes through plot that most shows would stretch into multiple story arcs, it does so moving from dissociation toward intense intimacy. At first, the show reminded me of the Showtime series Dexter, which also depicted a brilliant vigilante mind using his professional prowess (as a blood forensics expert) to take down murderers according to a code of moral superiority. The point, however, is that any code—whether moral or programming language—leaves breadcrumbs back to its source. If you believe in the ideals of Elliott or Dexter, all levels of criminality are justified if it serves the greater good.

Elliott is a genius whose brain is hijacked by an unnamed behavioral disorder. One of the show’s many layers is him coming to terms with the complexity living with mental illness and how one’s best intentions can lead to an internal fatal error that harms the innocent. While fsociety infects E Corp’s systems, Elliott (and those close to him) are plagued by a reality in which no one can feel secure within their own thoughts. As it turns out, Elliott has more in common with the unnamed narrator of Fight Club. Mr. Robot is not only the Shakespearean ghost at the feast, he’s a byproduct of Elliott’s psychosis.

Elliott surrounds himself with Mr. Robot (Christian Slater), childhood friend Angela (Portia Doubleday), Darlene (Carly Chaikin) and others who operate on society’s fringes. Instead of continuing with the breakneck pace, at the start of the second season the show retreats further into Elliot’s consciousness, crippling social anxiety, and schizophrenic-like hallucinations. Instead of showing the working class struggle, we get backroom meetings between E Corp CEO Phillip Price (Michael Cristofer) meeting with government officials in Washington D.C., discussing a bailout.

Another fascinating layer to Elliott as a hero is his earning potential and disdain for money. In many ways, he’s the wish fulfillment of a new generation trying to join Silicon Valley as it expands. Not only does he represent millennial brewing concerns, but he’s positioned—like many young computer engineers—to make bank. The median base salary for a computer engineers ranges from $90-$135K (according to Glassdoor), and I assume living in New York City further inflates how much Elliott, in his mid-to-late 20s, can potentially earn. We can’t underestimate Elliot’s appeal to those working in the same field, which offers some of the most sought after jobs of 2016 and requires oodles of academic debt but comes with the potential for steady employment and spending power. That Elliott is willing to throw this away for a greater cause, despite his relapses—both mentally and to morphine—paired with social anxiety that reflects both urban and social media isolationism, makes him an atypical, everyman antihero those steeped in technology careers can easily champion. 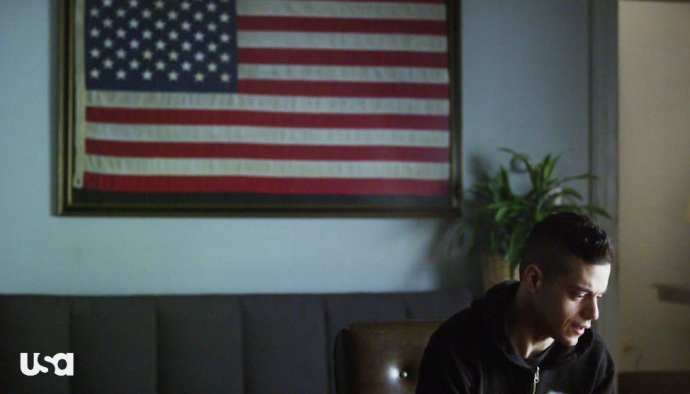 Mr. Robot recycles pop culture and embraces meta-commentary with comical poise. It has hackers watch the 1995 film Hackers, featuring a very pouty Angelina Jolie and Johnny Lee Miller who are teenager geniuses capable of matching wits the FBI. Whereas those high schoolers are seen as outcasts wasting time on their computers, rollerblading around social hangouts that rival the Foot Clan hideout from Teenage Mutant Ninja Turtles (shout out to a young Sam Rockwell), Mr. Robot’s hackers launch their attacks from an arcade on Coney Island.

Contrasting the playfulness with cyber terrorism works well, but I often worry about how future generations will interpret fsociety’s revolutionary acts. As Lindsay Zoladz (The Ringer) astutely points out, the perceived revolution might already be a sham through the first three episodes of the second season. Why am I worried? Well, take a look at previous examples of media where people miss the satire.

When I was a teenager, David Fincher’s Fight Club was heralded as a depiction of hip machismo. It’s easy for teenagers to misread satire, seeing Tyler Durden’s messianic rants as an open pass for rebellion. More to the point, in movies that show the corruption of Wall Street (like Wall Street and The Wolf of Wall Street), the morale often is the bad guy gets away with fraud, insider trading, and other forms of financial malfeasance. It’s my assumption that many bros on Wall Street walked away from those films pumped to make their next stock trade, not with a pressing need for introspection and self-analysis.

We live with a global economy that puts so much value on computer science and the mass reach of internet culture. When a character like Elliott claims to represent the will of the people and liberal ideals of knowing what’s best for the little guy, it’s hard to see a distinction between the result of his crimes and that of Gordon Gekko or Jordan Belfort. I began to think, what’s to say that programmers (or the pejorative ‘brogrammers’) and hackers, in spite of their intelligence and education, will feel validated and perhaps envious of fsociety’s brutal actions? Are we watching just another retread of ‘absolute power corrupts absolutely’ from both sides of the aisle? Or that characters that are in control are being manipulated by bigger forces, who have legitimate power and influence?

One of fsociety’s followers’ post-hack pranks is to literally incise the famous Charging Bull statue’s testicles as a reminder to higher-ups of their presence. Seems pretty amateur when compared to making E Corp’s Chief Technology Officer burn $6 million in front of a gathering crowd (brilliant scored to Phil Collins’ “Take Me Home”). Both approaches emasculate their adversaries and while bull testes make for a great mantelpiece, but their goal was never to collect trophies. Originally, the Charging Bull statue was an act of guerilla art and Sicilian-born artist Arturo Di Modica’s gift to the people of New York. It’s not hard to make a connection between the money burning scene and Modica’s surreptitious deposit of his bronze sculpture. Both were symbolic gifts meant to inspire a downtrodden populace.

This leads right into how Mr. Robot portrays (in small doses) class relations in the aftermath of fsociety’s righteous hack. Anyone who pays mind to the news cycle over the last decade knows that the middle class has all but eroded. Former presidential candidate Bernie Sanders built his entire platform on this economical shrinkage and wealth inequality. After stepping aside and pledging fealty to Hillary Clinton during the Democratic National Convention, Sanders made clear their intention to help fund the collegiate experience of middle class kids.

Why does this matter to Mr. Robot? The show’s symbiosis with the 24-hour news cycle is unavoidable. Instead of waiting around for the next market bubble to burst or even deflate, fsociety decided to initiate nationwide Armageddon by destroying debt data. Think student loan forgiveness on cocaine cut with Adderall, but at the cost of the preceding generation.

Just imagine you’ve worked your entire life, building toward retirement, and a phantom menace swoops to erase all of your money. This is a data system based on credit based on paper money based on gold. Is the hackers’ goal to expose the control illusion and put everyone on the same level, potentially pushing people toward a barter economy?

The show has barely scratched the surface of the impact on innocent bystanders. How fsociety practically condemned older generations, who might have no place in their debt-free utopia.

The main casualties, however, are working middle and lower class folks. Since Mr. Robot isn’t The Wire, we shouldn’t expect full seasons showing every social group impacted by systemic corruption. Mr. Robot provides nothing more than glimpses of these narratives, showing a woman in line at the bank arguing about late mortgage payments, even though she paid off her home. During a train car rendezvous between Darlene and Mobley (Azhar Khan), two members of fsociety, a man belts out operatic verse for loose change, his cup reads “lost my money and my mind.” His baritone floating is intensified by commuters’ inaction, as if fsociety’s revolution never happened.

Stephen Danos ​is author of the chapbooks Missing Slides (Horse Less Press, 2016), DO NOT WANT (alice blue books, 2015) and Playhouse State (H_NGM_N Books, 2012). Some of his work has appeared or is forthcoming in American Letters & Commentary, Boston Review, City Arts, Pleiades, and other places. He is E​ditor-in-C​hief and co-founder of Pinwheel, an online publisher of poetry, artwork and photography. He lives in Seattle.