Which Type of Vague Relationship Are You In? 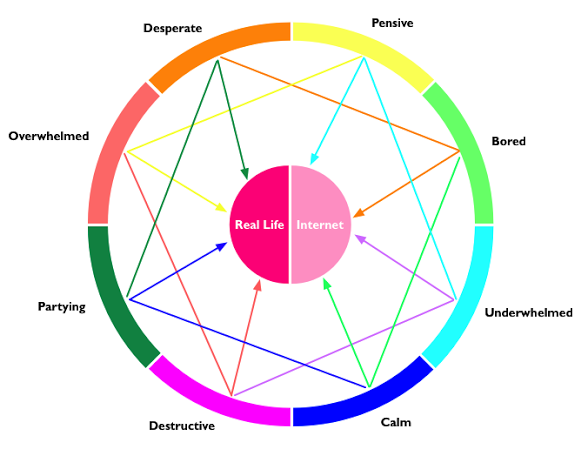 For young adults, vague relationships serve as an important rite of passage (or, in some cases, “rite of denied access.”) Vague relationships are where young adults learn to embrace their own inner vagueness, and come to understand that the universe around them is a mix of ambiguity, uncertainty and anxiety.

A vague relationship is born when two partners of Opposing Attitudes (for example, DESPERATE + BORED) become mutually attracted through their interactions with one another (either primarily online or primarily in real life). The scientific chart below breaks down the different types of Opposing Attitudes as well as the way they intermingle to create vague relationships.

In studying the different types of Opposing Attitudes and the relationships they create, we’ve established a list of some of the most common types of vague relationships. Our list includes a short description and a “Doomed Rating,” indicating how doomed this type of relationship is compared to others. We hope you find this guide useful and recognize these patterns in yourself and others.

Rehabilitation relationships occur between two partners who see each other as interesting, but are oblivious to one another’s true motivations. In this scenario, one partner pretends to “be chill” while secretly and furiously “tweaking” the other partner in the background. The goal, of course, is to discreetly transform the other partner, often “someone in a band,” into the second half of a “stable” long-term relationship.  The partner pretending to be chill assumes the role of the relationship’s “project manager,” often to the dismay of the other partner, who may decide to treat the project manager “like shit,” as revenge. Rehabilitation relationships can cause intense feelings of guilt, and the relationship status usually vacillates wildly between on and off.

Relationships of Negotiation occur when two partners attempt to circumvent the guidelines of a traditional relationship, operating instead under experimental “No Strings Attached” or “Casual Sex” rules. An important source of dissension between partners becomes what is and isn’t acceptable in the context of the experimental relationship. New situations must constantly be negotiated, causing tension and preventing both partners from “just hanging out.” Partners in a relationship of Negotiation can be very close for a short or moderate period of time, until correspondence is broken indefinitely.

A relationship of Quasi-Identity is defined by the lack of true knowledge that each partner possesses of the other. In this scenario, one partner may ignore the other’s real name, age, profession, relationship status and/or life goals, having instead replaced these data points with an imaginary identity constructed largely using the other partner’s social media presence. A relationship of Quasi-Identity is said to be both ideal, as the other partner can be romanticized or completely re-branded on a whim, as well as stressful, as the relationship can essentially “vanish” into a black hole at any moment.

A Mirror relationship is said to occur when one partner inadvertently “reflects back” negative emotions to the other. One partner can be anxious or preoccupied while the other is simply “working on stuff” or “doesn’t care.” In this scenario, the anxious partner will conceive imaginary reasons to justify the calm partner’s quietness and overall demeanor, thus generating more anxiety, progressively convincing him or herself, through repetition, that the reasons are accurate and based in objective reality. A mirror relationship often results in overly complicated, drawn-out dialog, as each partner will keep opening up avenues of thought and “insane theories” that the other will have to disprove verbally.

Barrier relationships occur when two partners are attracted to one another despite not speaking the same first language. Partners are usually able to communicate rudimentarily, assuming that they understand one another “on a level beyond language,” perceiving misinterpretations and mix-ups as “playful” and “funny.” Over time, misunderstandings relating to the goal, status and direction of the relationship, or the internal reality of each partner, will start appearing, often resulting in one partner becoming “fed up” and mentally reclassifying the other’s language, which previously seemed “cute and exotic,” as “incomprehensible garbage.”

The Salvation relationship is often only a pseudo-relationship, as the burden and awareness of the relationship exists only for one partner, who perceives the other as a “savior” or “personal jesus.” One advantage of a Salvation relationship is that since it’s essentially an imaginary proposition, one partner is free to interpret the other’s actions in an illogical manner that fit a personal narrative, disregard or “forge” facts, or insert subconscious power fantasies into the mix. This type of relationship is, of course, “toxic” and “insanely doomed,” but can lead to a highly coveted “stable relationship” if the burdened partner simply decides to “let go” and focus on people with “healthy qualities.”

A relationship of Extinguishment takes place when both partners establish early on that it would be preferable to “avoid labels.” The omnipresence of labels, titles and relationship narratives, therefore, becomes a huge, persistent threat to both partners, often resulting in one partner “not being able to take it anymore” and “making a scene,” melodramatically imploring the other to return to the boring safety of labels. Misunderstanding and conflict can also arise when partners come to vastly different conclusions about specific people or events. Extinguishment relationships are known to be “wildly unpredictable” and end abruptly, usually with one partner feeling “extremely fucked.”