Which One of Four Girls are You? 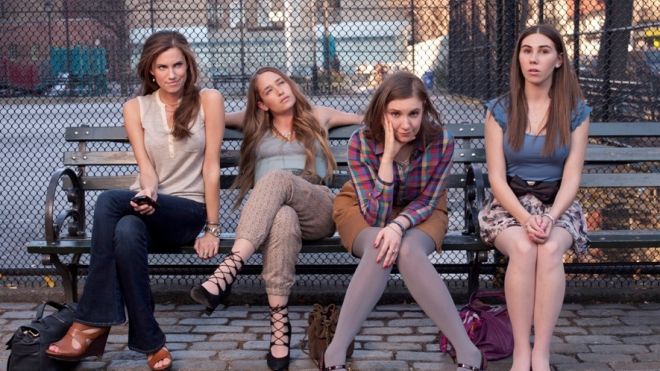 I am one of four girls in the world. Don’t laugh at me—so is your sister. And your mom probably was when she was young, but now she’s just a mom, so she doesn’t count.

Pop culture, television, movies and maybe just all society has done us ladies under the age of 35-ish the favor of fitting us into one of four archetypes. It’s super helpful. In board meetings where directors launch new television series ideas, they just have to say “the innocent one” or “the free-spirited one,” and the executives know what they mean.

This is such an easy trick. But ultimately, it’s super helpful to all women – instead of explaining the WHY behind our actions, we can simply tell other ladies “I’m such a Miranda.” Instead of trying to connect with every little character in the television shows we watch, we just have to stick to one character who gets us and empathize with each of her actions and actively root for her above all other characters.

Like me: I’m The Innocent One. When I say something adorably naïve, it’s because I’m the innocent type. When I forget, or quite possibly just don’t know, basic things like where Oregon is on the map, it’s cute and endearing. Whenever I’m in a pickle because I said something wrong, I can usually get out of it by saying “Sorry, that was such a Shoshanna thing to ask.”

But just which of the four girls are you?

You Are: Original. Your life tends to be the most interesting. Some people may say you are selfish, that you are a bad friend or don’t pay close enough attention to what is happening in other people’s lives, but that’s a rude simplification. First of all, your life probably has like, three times as many things going on. Second, and importantly, you have a good heart, even if you lose track of it sometimes. You fall in love a lot. You break up a lot. You lean super heavy on your girlfriends after said breakups. You probably have a gay best friend. You have amazing hair and everyone on the planet is jealous of your closet, especially those closest to you. It’s also likely that you’re experiencing a turning point in your life. Keep your chin up, honey! After all, Mary Tyler Moore is probably one of your role models.

You Are: Tightly wound. But it’s hilarious. Everyone depends on you like 300%. Because you would never let them down. Ever. Like, admitting defeat, or even giving 95% of your best is NOT an option. You might be the smartest of your friends. If not, you’re probably still the only one that hands in her homework. You look flawless every single day. Because you wouldn’t step outside your apartment if you didn’t. Often, you’re the only one with the tits to stand up to the leader when she is being a selfish bitch (as she is wont to do), but this is simply because you two are probably the closest of the group. You and the leader probably go way back. Your life isn’t JUST about the leader of your girl gang, though. You got your OWN shit going on. You probably have an amazing job, or at least a job that’s so perfectly you. Your icons include Oprah Winfrey.

You are: Weird, at least in comparison to the other girls. It’s likely you were a late addition to their group, or maybe just some outsider trying to get in on the coolest girl gang ever. Or maybe you’ve been a part of the group forever; it’s just that you’re such a cool chick you can’t bother to attend every meet-up. You’re probably that friend that takes forever to answer texts. Do you even text? Do you have a cell phone? You might be super hippie. You probably have the most sex out of all your friends. You’ve probably had the weirdest sex. A lot of the time, the other girls can seem flippant or self-absorbed to you, and in that case, you definitely don’t mind going off on your own. You do you, girl. You always do. Your heroes are ladies like Stevie Nicks and Gandhi, because like hell Gandhi can’t be a role model for young women.

You are: Adorable. Even if you talk too much, which you sometimes do. You never consider that people have malicious intentions or that the world could be a cruel place. Granted, you’re probably hopelessly naïve and may even be straight up stupid. It’s likely you’re the youngest in the group. You probably have a baby face. You might still be a virgin. Even if you’re not, you’ve probably only done missionary. You tend to have fewer boyfriends than the other girls because it’s always ladies first in your land. You love your friends to death, even if they tend to forget about you. In fact, your friends can probably carry a whole episode or like half and hour of a movie without you. It’s okay. You don’t need the spotlight. You just like that everyone is happy and getting along. Your role models are the Princess and furry white kittens.

Do you see yourself? If not, there’s a chance you could be one of these four outliers, but remember – these outliers are exceedingly rare. You should probably just fit yourself into one of the first four categories if you want people to understand you.

You Are: A background character. And a slut. And okay with it. Your best friend is The Leader and you’re probably her only real friend, even though she treats you like shit. You lose this game. You aspire to be Marilyn Monroe so you’ll get some goddamn screen time.

You Are: Sort of a less strong version of one of the first four girls. Except not the leader, probably. I’m sorry. It’s just because when Americans turn on the television, we want a lead character to look like the majority of us: skinny and blonde. It’s nothing against you. In fact, you’re really cool. Or rad. What’s the hip expression in your culture? Ratchet? Ghetto? You’re so ghetto.

You Are: Twee as all fuck. You’re kind of like the free-spirit, but weirder. And cuter. Like the free-spirit AND the innocent one rolled into one girl! You’re actually gaining in popularity, even though so many people are onto your cupcakey-little game. You like dancing in the rain. You’re probably only alive to make a boring boy’s life better. Oh, and you probably have no friends. Sorry! Go write about it in your fuzzy journal, because god knows you have one.

You Are: Probably not on TV. Or the star of a movie. How could you be? None of the writers know what you would do in a given situation. And you’d probably catch on and get annoyed with all the other girl’s ticks. Basically, you’d fuck things up. Yeah, whatever, good for you for being like “a fully-functioning lady” and all that, but try explaining that to Buzzfeed when it asks you what Disney Princess you are in an online quiz. I don’t know if you have good hair. Or big boobs. I can’t relate to you.