When Riot Grrrls Grow Up

It’s difficult to examine what’s left of Riot Grrrl––the records, the literature, the fanzines (oh, hey)––without recalling the initial screams and anger that fueled them. But in 2011, and in honor of its 20th anniversary,  New York University opened a new library archive dedicated to Riot Grrrl relics.  Documentaries of its glory days began popping up. Girls rock camps were flourishing. Riot Grrrl nostalgia was rising, and at far lower decibels.

Riot Grrrl lasted for just six years, long before I became aware of its significance and submitted my first zine contribution. But even by then, so long before the creation of this NYU archive, Riot Grrrl already felt like a golden era of the distant past. My high school friend Katherine and I had surely already talked of dreams to work at The New York Times, but the first time I held a copy of her zine Macaroon Shindig, I kept staring at the Safeway logo printed on the back––what remained of the paper bag of which Katherine constructed its cover. That Safeway logo seemed to say, Who gives a shit about a Times byline?

Yet at the same time, I felt sad that I’d missed out. To an extent, and especially while digesting the CSPAN-documented depictions of our political landscape, I still feel that way. The Riot Grrrl manifesto, written by Bikini Kill frontwoman Kathleen Hanna, encouraged unapologetic behavior and proactive accountability via these records, books, fanzines. Facing the facts––the House Republican vote to strip Planned Parenthood of government funding, the presidential debate’s lack of discussion revolving around women’s issues and reproductive freedom––certainly feels daunting without them.

To some relief, two acts with broad allegiances to Riot Grrrl have since arrived: Corin Tucker, an early and prolific Riot Grrrl participant, and Pussy Riot, the Moscow punk rock collective who cited Riot Grrrl as an inspiration. In her second solo effort, the Corin Tucker Band’s Kill My Blues, Tucker even promised a return to riot grrrl sonics. Meanwhile, Feminist Press’ new eBook, PUSSY RIOT! A Punk Prayer for Freedom, offers English translations of the trials and conviction of three Pussy Riot members, following their cathedral protest against Vladimir Putin’s presidency. [Pussy Riot member ‘Katya’ was released from prison on October 9].

However, Kill My Blues finds Tucker at an emotional crossroads. She still raises her voice, but at times as if she’s pleading, but she also lowers it at times, as if confiding. So while she may ask whether her generation’s stuck in a deep rut, wailing in dismay, she sounds as if she’s still searching for answers. Meanwhile, A Punk Prayer makes clearer than ever that Pussy Riot knew exactly where to perform. When read one after the other, in quick succession,  A Punk Prayer‘s translations points Moscow’s Cathedral of Christ the Savior as the heart of Russia’s religious revival––and, perhaps the biggest shield to Putin’s presidency, now in its third term.

Kill My Blues and A Punk Prayer offer completely different answers to the most frequently asked question directed at Hanna: “How do we restart Riot Grrrl?” Hanna already had the right idea when she wore a ski mask to an on-camera interview. “It was my pathetic attempt at having Riot Grrrl be leaderless, because everyone was saying I was the leader,” she said to Pitchfork. In that same respect, neither Tucker nor Pussy Riot should be considered lone saviors, or compared to just one, all-encompassing standard of what we remember Riot Grrrl to be.

At times, both Kill My Blues and A Punk Prayer answers directly to those expectations. “Did I fall asleep / on the backs of women that come before me?” Tucker wails in opener “Groundhog Day,” perhaps the starkest reminder of her Sleater-Kinney days. A Punk Prayer starts with a translation of the song they performed during its cathedral protest. Its lyrics accuse the church of accepting bribes over humanity, and they beg, “Virgin Mary, Mother of God, become a feminist! / Become a feminist, become a feminist!” Their anger is comforting because of its familiarity.

The differences between Kill My Blues and A Punk Prayer‘s overall messages are tougher to swallow. The second most gratifying song off Kill My Blues is “Constance,” in which Tucker whispers of being home, alone and terrified, only to meet the band in a spontaneous rendition of Nirvana’s “Smell Like Teen Spirit.” “My old life is dead,” Tucker sings serenely in the piano-pounding, blues-inspired “Blood, Bones and Sand”––a believable enough assertion by itself, but in the album’s full context, is only followed by when she turns to her guitar and wails out a prayer to “Joey,” as in Ramone. In the album’s title track, Tucker’s even taking stock of her moral support: “Kill my blues with your love,” she sings. Kill Your Blues is compelling because as it wears on, Tucker sounds increasingly torn between tending to her political outrage and still-growing personal realm, as a mother and parent––what angers her and what comforts her.

A Punk Prayer is a decidedly one-sided account, with a prosecutor’s statement and just a few excerpts of eyewitness accounts matched by hundreds of pages of defense. Still, it shows that in her closing statement, ‘Katya’ pointed out how their punk prayer shattered the picture-perfect perceptions of Putin’s presidency. In hers, ‘Nadya’ cites Madonna’s public support as proof, then cites revered figures who were also found to be blasphemous: Dostoyevsky, Socrates, Jesus Christ. And in her closing statement, ‘Masha’ repeats the Jewish accusations directed at Jesus Christ, before she concludes, “No one can take away my inner freedom. It lives in the word, it will go on living thanks to openness [glasnost], when this is read and heard by thousands of people.” No matter how much time had passed, or how hungry they were, the different voices, tones and rationales of the arrested members amount to just one collective, indignant protest.

Kill Your Blues sounds less indignant than Riot Grrrl fans had hoped. A Punk Prayer is perhaps more indignant and defiant than most Riot Grrrls could have dreamed. But even at Riot Grrrl’s start, Hanna valued the time spent summoning up the courage and then spewing out the anger. One clause of the Riot Grrrl manifesto states that “being connected to our girlfriends-politics-real lives is essential if we are gonna figure out how we are doing impacts, reflects, perpetuates or DISRUPTS the status quo.” The sentiments of the manifesto’s 16 clauses are almost evenly divided into such calls for internal and external debates––ruminations like Tucker’s and messages like Pussy Riot’s.

In Pitchfork’s interview, Hanna also offers an answer to the question, “How do we restart Riot Grrrl?”:  “‘Don’t.’ Because something’s organically going to start happen on its own; you can’t force it.” As she’s known, the term ‘restart’ is problematic. The most important aspect of what was started 20 years ago  isn’t necessarily the exact sounds and medium, but the bigger lessons that Riot Grrrl passed along about freedom of speech — ones that First Lady Michelle Obama echoed when she reminded women voters, “… we as women can make our own decisions about our bodies and about our health care.”

A small part of me is still fighting that impulse to chase after Riot Grrrl, for the same reasons I teared up while watching the first-ever Left Eye Music Festival in Decatur, Georgia. Seeing the TLC member’s younger sister act as her doppelganger, condoms pinned to her overalls, was a surreal reminder that at one point, music tackling feminist issues was far more mainstream. Since then however, I’ve tried imagining how blindsided people must have felt when TLC actually arrived: What are they wearing? What did they say? Riot Grrrl must have caught people by surprise too. That’s what I really want––music that feels as if it came out of nowhere, even if it actually took a great deal of thought. As our unrest seems to say, the next best thing is coming soon. 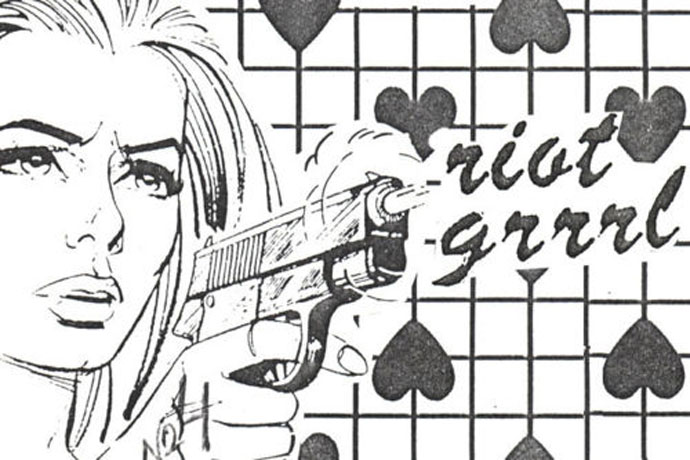