“What the Witch Doctor Says”: A Review of Travis Jeppesen’s The Suiciders 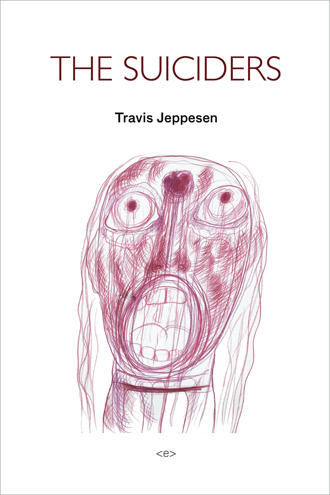 You hear a lot of talk in literary circles about the power of the sentence. How a sentence can do anything. How words are powerful, and contain manners that other media do not. Usually this means, for many sorts, that the sentences employed are lyrical, musical; that they sound really strong together, even sometimes at the expense of what they mean. Though, often, at the same time, the effect of those sentences are more dressed up versions of more basic sentiments: that is, the language is the only thing interesting about the writing. Take away the bells and whistles and what you have at heart is still a story about the nature of various relationships. The story, then, still rides the same hackles as the apes of any modernist you want to name.

Travis Jeppesen’s new novel, The Suiciders, is an entry for the far opposite-of-field. It takes less than a page to establish that over the next 224 pages you will be worked over at every turn, within a machine of language that not only works the hell out of its own sounds, but makes language force its way to things not previously construed. Those familiar with Jeppesen’s previous work, the novels Victims and Wolf at the Door, will likely have a high bar of expectation for the insane theatrics and death-knell imagery to come, yet I can assure you, this book resets the bar, both for Jeppesen, and for you.

At its most basic, The Suiciders portends the tale of seven squatter punks who form a cult. They live and fuck and do drugs together in a suburban household without concrete location; it could be anywhere, one imagines, much to perhaps the fear of the possible neighbors. There is a loosely-framed story guiding the plot in which the guys go out into the world and wreak their havoc on a zoo, in a nightclub, and continuously in the house serving as their base of operations. But where the actual action is, even as far as plot goes, happens line by line. There is so much placed in each fragment alone, and thereafter in how they string together into monologues and shifting scenes of often absurd violence, that makes any page in The Suiciders particularly ripe and open, nearly overflowing with the old challenge of plot. There are 10,000 plots per page. It is in the accumulation of the plots, and the fantastic charging of Jeppesen’s total mish-mash of syntax, physics, framing, voice, and possibility, that keeps you reading.

The book is almost like a continuous orgasm of images, syllables, and hell. Jeppesen doesn’t mind switching modes and tones and voices right underneath you, nor does he mind pushing the boundary immediately so far out of the frame that you forget there was a boundary to begin with. Here’s the first paragraph, to set the tone: “The house, a Gothic approximation of a dump with lots of stains, abandoned when found. Matthew’s friends were there a lot⎯when they weren’t running away. Fed it dead possum every night at the same hour⎯when he remembered he was still alive. The parrot’s name was Jesus H. Christ. Matthew sat there. Adam is over on the floor. Peter sniffing whiteout. Yellow cup drools. I have so many friends.” Simple enough syntax, but at the same time spinning, fast enough as if to point you in one direction only to spin you again toward the next. I consider this kind of writing––the kind without the bells and whistles of narrative’s way of carefully keeping the reader at all times in the game––a promise that the author both assumes someone reading is smart enough to work their way along, and, soon, a promise that the author was hell bent to say it as it meant to be said, and fuck the reader.

The reader certainly gets fucked. I mean this in the way it’s sometimes as if, reading the book, you are entered into a relationship where people touch you in your holes and want to rub it and get warm and make moaning noises. That’s an elaborate way of saying the characters in this book seem actually alive and entirely scatological, horny, fiendish. I could try to say more about the plot and the images of what goes forward, but really it is the experience of the book itself that makes it alive. The most minimal action causes the biggest shifts of energy, and allows the sound of the language to hit the reader in the head, over and over. There is an almost 3D mania to Jeppesen’s orchestrations of the people in the book, which as the book continues from its relatively calm opening only builds and builds. Here’s the second paragraph on the second page: “Pretty song plays. Adam bit himself just for fun. Bit his wrist until the blood came. Flowers for Algernon. That’s the name of the TV Movie of the Week. Forcefeed television demented fears, it will reciprocate via Evening News. Jesus H. Christ flew over, landed on Adam’s head, fluttered its feathers. Hey Matthew, can a parrot fart?” Again, another level higher than even the previous page in its direction, and beginning to split the reader from where he or she began. Guys fuck cows, skin is smoked, bibles are read on toilets, hangovers appear instantly, porn stars hang out, sentences say shit like “Scrotal definitionism, the mindblogs fierce.” It doesn’t matter if you gather what that means; you already heard it.

The brain of the machine of the picture chops in and out, narrated by turns by these seven friends all of whom seem to share a mind. Soon, as the sentences continue shifting, not by lyricism as much as the permutations of a contemporary Sade, on better drugs than they had back then, and surrounded by more and more humans and devices. There is more packed into a page here than you might find in many other sorts of novels, if you are the sort who likes unpacking puzzles in a frenzy, letting the action and colors and ideas wash over you and absorb into you, kind of the way you end up in a cult. Does this book cause cult behavior in its reader? It might, considering how, thankfully, it is a book that promises to give more and more the longer that you stare. Certainly, The Suiciders is one that would give off more body each time it reads, as over time the structures employed begin to take such a heavy level in their onslaught that you can hardly remember where you are. There are no pulled punches here; if anything, the punches are punching even at themselves, trying to bruise the work into the paper, keep it changing.

In all its insanity, the book is not, in the end, only a fantastical, addled, hyper-Kenneth Anger on parade. It is that, but also, buried in the pages, are countless icons of ideas, of intentions, of, yes, even wisdom, born in the light of what whirlwinds cause shitty insane people to be shitty and insane. “I’m so open to experience, I’m like a toilet,” says one character about halfway through the book, and that seems a wonderful display of the attitude of the book itself; it is awoken from a hole where shit of thousands passes through and becomes mushy color, so much sound and smell you can hardly tell where you are, nor do you really want to. Unlike a toilet, though, this book is bottomless, and provides.