What It Takes to Be a Princess 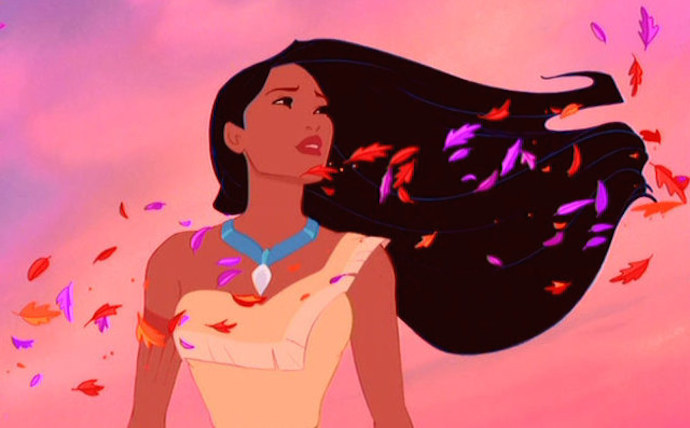 When Disney’s Pocahontas was released in 1995, my parents took me to Central Park to see the movie on a huge outdoor screen. Like so many little girls, I aspired to be beautiful—which meant, if Disney’s leading ladies set the example, that I needed to know how to sing. After the movie, I asked my parents for the Pocahontas sing-along, and followed the bouncing ball to the point it deflated and the VHS broke.[1] But even with all those lyrics in my head, I was unable to verbalize to my parents why Pocahontas was my favorite character, or why that Halloween, I wanted to be Pocahontas, even though I had never dressed up like Cinderella or Belle before. I didn’t know how to say that it wasn’t them, but me who suffered from one less dimension. To get to where they were, you went into the negative first. To dye hair like mine brown, first you bleach it.

So for Halloween, I was Pocahontas—a Disney POC. In that every female Disney character in the 90’s was a king or sultan’s daughter, the P stood for princess as much as it did person. Back then, as a young first-gen Latina growing up in New York City, I might have told you I was Spanish, even though I’m actually Colombian, and nobody in my family knows which conquistador deigned us Jimenez. There were no Spanish princesses as far as I knew, so Pocahontas it was.

As much as I liked Pocahontas, I liked her boyfriend John Smith even more. After Shaggy from Scooby Doo, he was my second ever white-boy-crush. After cartoons, it was Nick Carter. When I moved on from blonde hair, Orlando Bloom. In 2003, as I watched the Super Bowl in my parent’s living room, suddenly, Jake Delhomme. I excused myself at the halftime show once all the players vanished. Like flipping through a stack of playing cards, all of John’s faces rushed towards me as I sat on the bathroom mat with the bulbish end of a hairbrush, having my first orgasm.

I don’t know what kept drawing me to white guys, but the truth is I was obsessed. Maybe it was how my mom speculated, over a sink endlessly filled with dirty dishes, that American men knew how to treat women right. Maybe it was that I didn’t know white people other than the few Polish kids at my school, kids who were as middle class as I was, but whom I found beautiful, exotic. Whatever it was, it was undeniable—I was infatuated with white boys.

Still, there was a problem: for as much as I liked white boys, it didn’t seem like they liked me. In school, even the Latino boys said I look Hindu. From the way they laughed, I knew it was no compliment. The first time I watched it, I knew that Pocahontas’ world was fantasy, but I attributed it to the talking trees. I didn’t know that for a woman of color to be seen as beautiful, intelligent, intriguing as a white woman was similarly, a fantasy. It took years before I understood, and once I did, I was desperate for people to know they’d never have to rename a Stephanie Marie. All they’d have to do is hand over a surname, blanched of the pesky accent, the wrinkles of the last two definitive letters. A piece of cake to erase: E.Z. No Poca-hoca-whatever. And even Pocahontas changed her name—by the time she died, she went by Rebecca. Becky.

Back then, it seemed to me that the height of Disney’s cruelty was that Pocahontas stayed in Virginia instead of joining John—her true love—in England. If Ariel, a half-woman half-fish, could end up with her dream man, why not an Indian? And I thought a lot about how Jasmine is the only Disney princess that doesn’t end up with a white guy. She gets a street rat instead.

That day of the Super Bowl, white faces rapid-firing at me, I came for the very first time. I cleaned up the bathmat with balled pieces of toilet paper, and I knew, in reality, I was not Pocahontas. I was not the kind of woman who stays behind. When I found my John Smith, I’d keep him.

By the time I was in college, I had dated both white guys and people of color, and I didn’t idolize whiteness anymore. I had lived nineteen years with my mother’s conviction that white men were incapable of betraying a woman, so when one of them cheated on me, I was less devastated than utterly shocked. I could feel my reality shifting as I learned that all men were essentially alike, variations of the same reptilian brain. At 19 years old, I thought I had discovered the truth.

It was with him, the white boy who cheated on me, that I first started dressing up. I would go to a website called 3wishes.com for costumes: sexy school girls, nurses, maids. The occupations never excited me as much as the cultures. For less than fifty dollars, you could dress up like Pocahontas. I hovered the cursor over her feather-lined hips.

On campus, at parties, the girls wore bindis. On campus, at rallies, the girls wore neck scarves. They draped themselves in ponchos in class. As a child, I didn’t know white girls. I didn’t know if they dressed up like Pocahontas, or if like me, they had set rules for themselves, and stuck with Belle or Snow White. As I lingered on 3wishes.com, I remembered my mother at the sink, a rubber-gloved forearm raised to her ear, trying to get at an itch without drenching her face in water. I remembered that her commentary wasn’t just on the true nature of white men, but also on white women. No mija, she’d say, the TV in the living room loud enough that my father wouldn’t hear. You think they come racing home from work to make their husbands dinner? Those women aren’t pendejas like me. Those women do whatever they want. I remember my dad sitting in the living room, oblivious to our conversation. My mother was the kind of woman who’d wait to speak until the men left the room.

I never ended up clicking on the 3wishes website. I instead let the boy I was seeing, the one who would cheat on me in a matter of weeks, make the choice for me. He settles on something decidedly boring – a kitten costume, complete with a leash. I tried not to show my dissatisfaction with the fact that he’s selected from the only category that doesn’t include persons, that he was asking me to role-play something that didn’t have the capacity to speak. Either way, it didn’t matter. Soon, I’d found out that all men were the same. I was not the kind of woman who was fooled.

Leading up to college graduation, I started reading about race and power. I no longer pined for what my mother called American men. In time, in earnest, I started thinking I was decolonized. I understood what Cherríe Moraga meant when she said the oppressor is the person who lives in our skin. I knew that in reality, Pocahontas’ life was misery. What happened to her was rape—not love. In reality, she was likely poisoned in England by the colonizers who dragged her there in the first place. Pocahontas changed her name to Rebecca, Becky, not because she wanted to, but because she was forced to assimilate. Her predecessor included Doña Marina, previously known as La Malinche. Her successors included Sarah Baartman, formerly, who knows? In the end, Pocahontas died before 21. [2]

In 2013, when I fall in love again with another white guy, this time, I don’t seek him out. We are at the same concert, at the same time. I don’t remember who talks to who first. He has blue-eyes, and brownish hair, that under certain lights, is blonde.

On our first New Year’s together, my best friend has too much to drink and loses a front tooth on the sidewalk. I’ve only just started dating this new boy, and the sight of us oscillating between laughing and trying not to, must be infuriating. For no other reason than she’s drunk and enraged, she winds up calling him racist.

Today, one of La Malinche’s enduring legacies is the word malinchismo, a term used in Mexico to denounce people who idolize whiteness. Imagine if they started using your name to mean traitor. It’s been long since that happened, and she’s apologized since, but today, when I think of her saying racist, I imagine my friend facing me.

Still, my boyfriend and I stay together. Years after that first New Year’s Eve, on a morning in 2016, I meet a couple of his friends. The four of us are mildly hung over, lazily watching TV. A freckled white girl with long, dark hair flickers across the screen. Pocahontas, the friend says, growling. The rest of us remain silent. My favorite girls, he helpfully adds, are Persian. I want to ask him to specify: Western or Tajiki? Girls who cover or? But he means Persian not as a language or identity or culture. He means Persian like, a look. [3]

I get up from the couch to go to the bathroom. On the way there, I remember the all the different kinds of girls: the girls in bindis, in ponchos, sombreros. The kind of woman who tries on a look.

In the bathroom, I stare at myself. Outside, my boyfriend flips through the channels. For as much as I like to fantasize, I can’t imagine that he’s corrected his friend. Every so often, a thing like this happens, and even though I’m usually sure we love each other, I start to wonder if I’m terribly wrong. I start thinking of all the fucked up history I know, how white people and black people were once called different species. How a thing called mulattos made up another. How, what makes up a pyramid is what’s stacked on each other, and what’s lying below you only makes you stand higher. This is history, this isn’t my boyfriend, but this is a thought I cannot shake off.

Suddenly, a little girl appears. I recognize her long hair, her tiny fists. She clicks her tongue, her face contorted so it looks like she’s on the verge of calling me stupid. I hear her enunciate clearly: What colonizer? Who?

Hey, she says, crossing her arms. You haven’t dressed up in years.

I rub my eyes, but she doesn’t disappear. I peer deeper into the mirror so that I can really look at her face. I ignore her concerns—mine are more important. My world hinges on it; I’m desperate to know. I think I love him, I say. Can I keep him?

She uncrosses her arms. Her eyes flicker with what looks like disdain. A princess does what she wants, pendeja. What kind of woman are you?

[1] Why do all my dreams extend / just beyond the riverbend?

[2] Is it only death that waits / just around the riverbend?