What Does Art Owe Us? 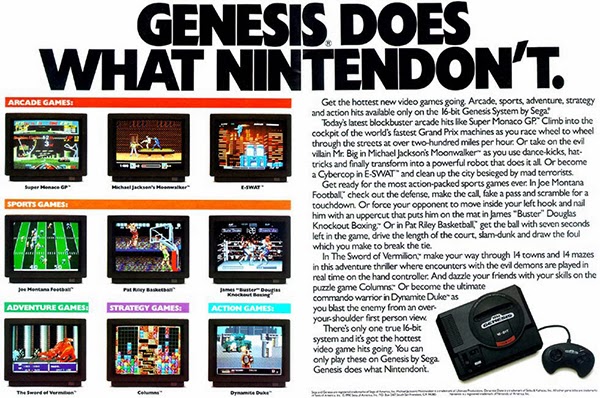 I wanted to read and like Console Wars, Blake J Harris’s account of the Nintendo vs Sega battle that ‘defined a generation’ according to the subtitle, for lots of the same reasons I wanted to play video games to begin with: cool kids. We didn’t have a console at my house when I grew up because of the no-guns footdown of my mom, but a thirty second walk to the Capecchis across the street got me hours of Contra. I was given a GameBoy when it came out and played Tetris and Paperboy almost exclusively (because I didn’t have money to buy other games), and if I wanted to play Sega, I had to go to Kevin’s house (which, incidentally, also had a sauna [his father was first generation Finnish]).

Maybe all that info’s unimportant. It’s hard even to know. Like lots of folks who came of age in the late-80s through early 00s, I cared a lot about video game systems, and they meant A Whole Lot—in my case, they meant the stuff on the other side of the window I stood staring wishingly through. Gaming systems had gravitational pull: I’m not sure what device confers similar popularity privileges at present, allowing the dweebiest to rise king-like through nothing more than having the cool system or game no one else at that moment possesses, and I still wonder what % of certain friendships had to do with access to games.

And while the games were drool-inducingly challenging and satisfying, there was an off and slightly occult aspect to them, from Mario being able to make a few extra, odd jumps and suddenly find himself beyond a land named after him, or the way, with furious coded thumbmashing, one could get 30 extra lives in Contra (though once you’d won the game using all 30 lives enough you’d learn to win without losing even a single life, and then the point was to max out the game, finish it with a full 30 lives, messy function giving way to something like aesthetic, trance-like purity), to the way some friends seemed to have an uncanny ability to blow games perfectly clean in ways the rest of us couldn’t (which skill—blowing the games clean—was crucial at least for early Nintendo stuff). There was, in that era of gaming, I’d argue, a real weird- and wildness, maybe akin to like Netscape or Mosaic in the early 90s: the world of gaming was being both invented but also explored, discovered. Who could’ve guessed a video game based off a blockbuster movie would fail (E.T., which game’s come to light of late because there was a semi truck worth of the cartridges dumped in the southwest, which semi was just dug up), while another, based on a plumber rescuing a princess and eating mushrooms, would be a Cultural Definer? There was, overall, little to do with immersive beauty re gaming as it is today: the 80s games that I and most of my friends fell for were tightly controlled and masterable and pixelated, and we played for the beauty available through decoding them. All of which is to say: a book about video games has tremendous merit (while Tom Bissell’s Why Video Games Matter is fantastic, the thing’s largely about current gaming, which is to the 1980s gaming world as LeBron is the George Mikan: they’re playing a game that’s nominally the same but are otherwise not comparable).

And so it was hugely sad to read Console Wars, though the sadness has as much to do with the video game industry as it does with the book Blake J. Harris has made. For the record: the read is eh—Harris is responsible for some of the book’s sadness (I’m 100% aligned with Chris Suellentrop’s NYTimes review, in which he writes, “When Mr. Harris isn’t unfurling clichés [speed is blazing, a woman is doe-eyed, go-getters are scrappy], he is falling prey to the language of public relations. A dud of a robot that came with the original Nintendo Entertainment System is described as ‘groundbreaking.’ A new Nintendo advertising slogan is ‘paradigm-shifting.’ Sonic is compared to Michael Jordan, Bill Clinton and Kurt Cobain.”). There are further problems with the book, but they’re monumentally secondary to the larger problem at the book’s center.

Which problem is: Console Wars draws back a curtain and exposes with absolute clarity that the folks who were dishing games at all of us so mercilessly, from 1986 or so through at least the 1990s end, couldn’t have given less of a shit about anything having to do with the artistry of the games. Maybe this isn’t important to you. Maybe it shouldn’t be important to me. But it’s hard not to react with either anger or anger’s cousin to find out that the folks behind Sega (and Nintendo, to a degree, though Harris to this reader registers hugely as a Sega fanboy, presumably because of access offered to him by Tom Kalinske, the then-head of Sega USA, who in this book comes off as as faultlessly perfect as any man in any book you’re likely to read) really, truly, could’ve been selling anything at all—Pepsi, fart-inducing tacos, generalized widgets—so long as we’d kept churning out parent-given dollars.

Sure, sure: the behind-the-scenes stuff about the hardware being developed—how the gaming systems were put together, how the pieces fell into place—are interesting (particularly: the talks that transpired between Sega and Sony, which talks would have—had they been fruitful—led to Sony making optic drives for Sega, which agreement would’ve presumably killed the need/idea for PlayStation). And Sega’s a fun company to read about as a scrappy upstart taking on the entrenched behemoth that was Nintendo, plus it’s compelling as hell to read about (and remember) when there was such a thing as scarcity: remember when there was stuff you just couldn’t get? Like: things just ran out, like games or consoles (I suppose iPhones have run out, early on)? Remember wanting? It feels dustily analog, reading about stores being ransacked and selling out of stuff in minutes.

But for all the behind-the-business-scenes fun, there’s this creepy portrait of a whole bunch of folks who were just desperately throwing shit at walls in hopes that something’d stick so that we (or you, whoever) would buy. Sonic the Hedgehog, for instance: dude was simply engineered, a figure manipulated into accessing wallets. A football game for Sega was literally one that’d been made for computers and relabeled. Examples abound. I’m not claiming this is rare or irregular: movies and books are just as terrible at jacking and tweaking the next guy’s moneymaker. So what’s the beef?

Ultimately, it’s one of focus: Harris’s big goal clearly wasn’t to illuminate the strange compelling glory of early video games, and to trace how that blinkered, holy-cow-what-next epoch gave rise to the massive multiplayer shooterverse we’re all Haloed in now, but the story of the battle between Nintendo and Sega isn’t much different than the story of any two companies battling for market supremacy in any field (Target vs Walmart, Pepsi vs Coke, etc.). The book’s fuel has to do with how business folks disrupted things through new strategies (how Sega eventually gets Walmart to carry Genesis is amazing, but also a gut-punch in that there’s no way to read it without realizing with total brutal clarity that no one cares about you when you purchase things, not the product makers nor the people you buy the product from: they care about your money) and new ad campaigns (which is one of the hardest parts to read: the ’90s commercialized ‘alternative,’ and reading Harris on the marketing schemes dreamed up to hitch their wagon to the be-yourself-not-the-other-guy star is remarkably similar to watching the lamest parts of Wayne’s World with Noah from Noah’s Arcade [meaning this reader spent lots of time thinking this guy blows goats]), but the truth is, it’s all just business. The video games themselves feel, through and through, incidental: the marketing and company jockeying lead the way, and all art (or, really, even ‘customer satisfaction’) was several steps down from secondary. Kalinske and Co could’ve been selling anything (and, to be fair, he had: prior to leading Sega, he’d reworked Barbie [meaning maybe this is where simply to note that maybe the 80s were merely a jagging moment of sure-okay-try-it, business-leader-wise (Sculley leading Apple after leading Pepsi, for instance)]).

Which leads to the question: what does our art owe us? Obvious answer: nothing. Maybe it’s unfair to ask anything of art other than that it be itself. Maybe I should just be glad and grateful for those fun, unsettling feelings that accompanied the video games of my youth and not ask for more than the feelings themselves. Still, it’s hard not to feel strikingly similar to seeing the shittiest possible Oz sitting behind a ta-da drawn curtain: that’s it? The only matter, that whole time was to get our money, and whatever art showed was just stumbled upon? What a bummer.