We Play Alone: Notes on Galaga by Michael Kimball 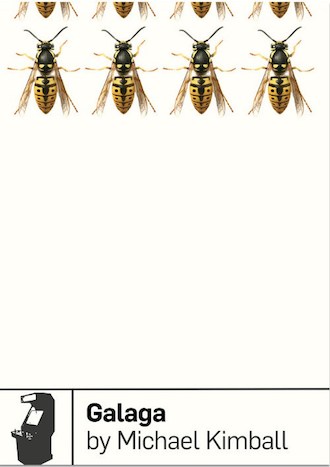 In a crowded & warm apartment in Baltimore, I gave a reading with Michael Kimball, whose latest book Galaga was just published by Kickstarter outfit Boss Fight Books. He read before me. I wasn’t happy to follow him but I was happy to see him go. Before he began he admitted: this book couldn’t be more impossible to read from.

Broken up into 255 “stages” (like in the game), Galaga is a small book, the fourth in a series dedicated to classic video games. In these stages Kimball weaves together the history and legacy of the famous arcade game with a memoir-ish narrative about growing up in an abusive household where Galaga was an important escape. The arcade was a place without family, without his father, without his brother. A place where he was allowed to feel alone and good at something.

The golden age of the arcade was in the 80’s, during Kimball’s youth. He made his best friend there. They rode their bikes to the Lansing mall in Michigan and spent all of their quarters at Aladdin’s Castle. In one stage Kimball remembers bringing a girl there and the confidence playing Galaga well in front of her brought.

Other stages are devoted to examples of people’s affection for the game, like this one:

Though occasionally Kimball will come clean a little while later, saying:

I made up that bit about all those people going as a game of Galaga for Halloween. But wouldn’t that be awesome?

He’s playing his own kind of game here, writing a book with many parts about a game with very few. There’s that 4th wall self-awareness to it, but it could be something else. Kimball could be allowing himself childish games of Wouldn’t it be cool if..? Or Kimball could be toying with us, the way the game toyed with him, the way a player can feel duped, the way games muddle reality, the way reality muddles games.

I started writing this book the summer of 2013, and I started playing Galaga again any time I saw a machine anywhere. I was trying to get that awesome feeling back that I had as a teenager playing the game, but I couldn’t recapture that flow and that feeling. I began to feel as if it just wouldn’t happen again, but that was OK: I was still having a ton of fun researching the book and remembering those days of playing video games in the arcade.

As adults we don’t stop asking questions, we just stop expecting answers. We accept things like This isn’t how it used to be even if we can’t pinpoint why. Even if the the closest answer is Well, time. Playing Galaga now, Kimball is farther from the old feeling than when he’s at home writing a book about it. To interact with something static over time only underscores how much we’ve changed.

It’s easy to rally behind Kimball’s books. They are kind objects in this world. They have a way of listening to people, characters, his own past. He exposes his selves that had it more difficult. In doing so they are heard, accepted, and stored between pages for safe-keeping. It’s useless to try ridding yourself completely of something.

In a previous book, Michael Kimball Writes Your Life on a Postcard, Kimball condensed how people remember their lives with such efficiency that you understand the undescribed years between the words. You sense the time spent just spending time. He gives you blueprints and you see buildings.

When I started doing Galaga research I was surprised by the extent of the game’s legacy. There are Galaga clothes, jewelry, and collectibles. There are Galaga tattoos, Galaga ring tones, and Galaga baked goods. There is Galaga art. Galaga continues to show up in songs, books, TV shows, and movies. Galaga is one of the most bootlegged video games in the history of video games and there are also a bunch of Galaga hacks, clones, and updates. I love Galaga, but I didn’t know that so many other people love Galaga too.

From this simple sentence “…but I didn’t know that so many other people love Galaga too” comes the confusing sadness Kimball felt learning that what he loved intimately wasn’t just intimate to him. What we form personal connections with can have as many other connections as there are people in the world.

Like body language, this sentence speaks in what it doesn’t say. Had it gone, “I love Galaga and I didn’t know that so many other people loved it too,” the implication would have been celebratory, meaning Kimball was both surprised and supportive of the game’s success. But, however, means there’s a problem. But means life is complicated. But means we aren’t alone even when we try to be, with a single player game in a dark arcade, with memories we thought we had to ourselves.