“We had 3D in my day and we called it AMERICA.”” On Motherland Fatherland Homelandsexuals 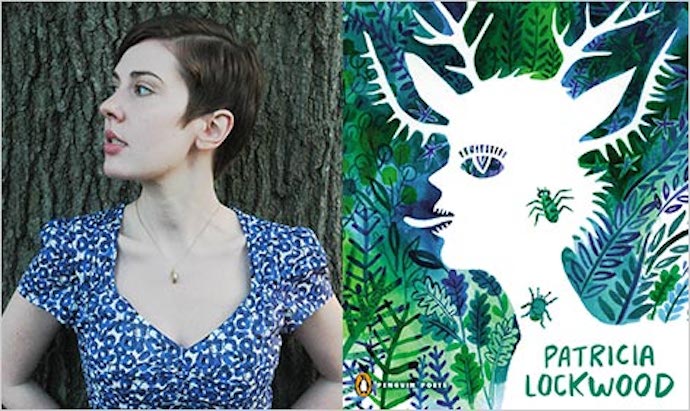 The “most popular” poem in Motherland Fatherland Homelandsexuals by Patricia “God Poem” Lockwood says, “if you write a poem called ______ you’re asking for it to become the only thing people remember about you.” Most likely, if you’ve heard of Patricia Lockwood there’s a pretty good chance you’ve read her “most popular” poem. And as good as this poem is, I believe it’s worth talking about her other, not-as-popular poems.

For those who don’t know who Patricia Lockwood is or if you’ve never read her “most popular” poem please send a self-addressed stamped envelope with your query to: Google Inc. 1600 Amphitheatre Parkway Mountain View CA 94043. Anyway, a large shirtless masculine college bro just climbed on the roof of my forehead and yelled “Let’s do this,” before leaping into the pond waters of this review below.

My favorite part about Motherland Fatherland Homelandsexuals is all the parts where Patricia Lockwood does words and after I read these words I thought, “Wow, those are good words.”

Here’s a sample of some of the good words, and my thoughts on them.

A kittenhead struggles out of your face.

I don’t know anything about kittenheads, but one of my friends was named “face butter,” which was so painful he had to change his name to “no face.”

It will grow from your thoughts like the ones on your head.

Before I read this book I was not sure how thoughts eventually crawled out my mouth.

You walk to school and sit next to a girl who was born with a tail and you copy off her.

There was a tail girl at my school too and everyone copied off her until one day Billy Milkseed cut off her tail and stapled it to his butt because he thought it would make him the wisdom child.

Every time I try to cry, a new kittenhead grows out of me.

Every time I try to grow a kittenhead, I cry.

Drank milk until he died.

In the future, this will be written on everyone’s tombstone.

A city cannot travel to another city.

A city cannot visit any city but itself.

Don’t let your mom catch you doing city-on-city humping or she will tell your dad.

Remember, a few years ago, when dads were everywhere in poetry?

Nature wants you to pee in her mouth.

We all pee in nature’s mouth every single time we breathe.

A horse fucks nature to death up in Oregon.

Everything is horsed to death in Oregon including the horses.

She drew in her breath the first time she saw him and never breathed out again.

This reminds me of the time I tried put skittles in my lungs instead of oxygen.

We had 3D in my day and we called it AMERICA.

I grew up in a town where most of the food was not multidimensional. It turns out this is illegal. Everyone in my village got put in an army boat and then burned.

Is something else in here dying the way I’m going to?

It would be nice if instead of dying, people went into a constant state of yawn and were kept in a giant yawn museum so family and friends could visit whenever they wanted to feel dead people yawn on them.

When you want to say a poet is mysterious say, “Very few tit-pics of him exist.”

Recently I tried to use my phone to look at photos of a famous poet, but the only pictures I could find were of a dead poodle named “Rick.”

Emily Dickinson was the father of American poetry.

Whenever I come across something like Motherland Fatherland Homelandsexuals I can’t help but think, “The world is changing and if your box of penises is not ready then please empty your box of penises.” Poems and words were built to defeat all things.

After I read the poem “The Father and Mother of American Tit-Pics” a metaphorical team of penises living in my brain was castrated. There was a lot of penis blood. I was afraid I would have to sell my brain on craigslist. For a week, things were very traumatic. I began dressing like Mitt Romney. People began asking me if I was going to run for president again. My backpack had nothing in it except “binders full of women.” I called Obama and asked if he and Michelle wanted to go to a poetry reading. He said they were probably going to stay home and do social media. Mitt Romney went to the poetry reading alone. No one else showed up. Mitt Romney took out his binders full of women and began auto-erotically asphyxiating himself while imagining a Washington Monument entirely made from white flesh. As Mitt Romney finished and he was good and strangled and dead, he got a text message from Patricia Lockwood. The text message was an image of Rand Paul masturbating to Governor Chris Christie’s poetry chapbook.