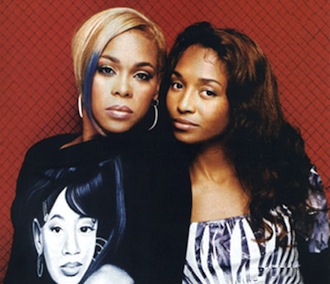 As her friend gabs to a makeup artist, Rozonda Thomas yells from another room inside this trailer. She may have launched a handbag line and non-profit organization, but to this day, she maintains that she and her friend Tionne “T-Boz” Watkins are still two-thirds of TLC––the biggest-selling female group in U.S. history. “Can’t y’all just respect the fact that my name is Chilli?” she says.

This is the season premiere of Totally T-Boz, which aired January 1 on TLC. This show (Tuesdays at 8 p.m.) follows Watkins as she moves from Atlanta to Los Angeles, still battling sickle cell anemia and now contemplating how a 60-day, TLC reunion tour could affect both her health and solo career prospects. Less than a week later, the second season of Food Network’s Rachael vs. Guy: Celebrity Cook-off––as in, Rachael Ray and Guy Fieri––kicked off. Chilli is one of eight stars competing for a $50,000 charitable donation, her qualifications being her Grammys and her “healthy and soulful cooking.”

Day-in-the-life snapshot Totally T-Boz and ensemble competition Rachael vs. Guy arrive as TLC preps to celebrate its 20th anniversary, a decade after Lisa “Left Eye” Lopes died in a car crash. T-Boz and Chilli may be called celebrities, but like a lot of reality television centered around celebrities, these shows find these two long after their prime, trying to dig themselves out a slump.

Within the first few minutes of Rachael vs. Guy‘s season premiere, a photo of TLC flashes on the screen. Chilli steps out of a limousine and onto a red carpet. “Paparazzi” snap photos and beg for autographs. For the rest of this hour-long episode, Rachael vs. Guy emphasizes the Celebrity aspect of Celebrity Cook-off. Contestants must cater and stage a skit for a 100-person audience––a slight revamp to last year’s season premiere challenge, only this time with Entertainment Weekly staff sitting in. As for close of half of its contenders, the skit provides Chilli a chance to reiterate her claim to fame.

“I’ve performed in front of hundreds of thousands of people, but to cook for a hundred people? I’ve never done that,” Chilli says. Rachael vs. Guy has its moments: comedian Gilbert Godfried presenting not one, but two versions of peanut butter sandwiches; figure skater Johnny Weir twirling at the sight of food, as Chilli cheers him on. However, the more each contestant recalls his or her glory days, the more tiresome Rachael vs. Guy becomes.

T-Boz first spoke of her ongoing battle with sickle-cell anemia in 2000, when symptoms forced her to quit touring for TLC’s third album FanMail. The first two episodes of Totally T-Boz address this, plus how a brain tumor has prevented her from recording solo tracks––factors that add to reasons why she’s hesitant to join a 60-day, TLC reunion tour. T-Boz is still recognized and respected, but in attempts to rebuild her stature, she finds herself at a mall, judging a “No Scrubs” karaoke contest. She eats food that she shouldn’t eat, and she doesn’t schedule doctor’s appointments as she should. She’s far from “Unpretty,” though she is imperfect.

Over and over, Totally T-Boz answers questions about her past, only to pose just as many questions about her future. The hour-long show darts back and forth between footage and additional narration from family, friends and T-Boz herself. Sometimes such explanations aren’t necessary, like when T-Boz tells Chilli that TLC is no longer her top priority. (“The fuck,” Chilli repeats.) Other times, as when symptoms of sickle cell anemia start to flare up––T-Boz’s body slumping, her eyes glazing over––they feel crucial.

Although it is still incredibly early to tell how the rest of Rachael vs. Guy and Totally T-Boz will turn out, the biggest similarity and difference between the two shows are already apparent. Both shows revolve around second chances, while also posing questions of how TLC will celebrate its 20th anniversary. At the same time, while Totally T-Boz is a show about moving on and how T-Boz’s life depends on it, Rachael vs. Guy is a smackdown amongst fading stars, whose careers depend on it.

A VH1 biopic about TLC is in the works, although the network is still searching for actors and a director. In the meantime, TLC may or may not tour. All fans know for certain is that TLC will appear on these prime-time slots––as in Totally T-Boz‘s debut episode, when T-Boz and Chilli step out of their trailer and onto the set for a remake of their “Waterfalls” music video. For a few takes, Chilli struggles to maintain a straight face––as always, both of them say. Fans probably didn’t know that, although they probably could have guessed.