Walking a spiral, a loop approaching a star: On Limits and POV in Film

“Circumamubulate the city of a dreamy Sabbath afternoon.” —Melville

Imagining excerpts of films, on a loop. More specifically, openings of films, on a loop: an interrupted beginning returned to, perpetually. Films that open for several minutes with no dialogue at all, a subtle story told and retold, without words, a figure wandering in vivid color away from a past the audience knows it will never see but somehow ending up back there again.

Such as Red Desert (Michelangelo Antonioni, 1964). 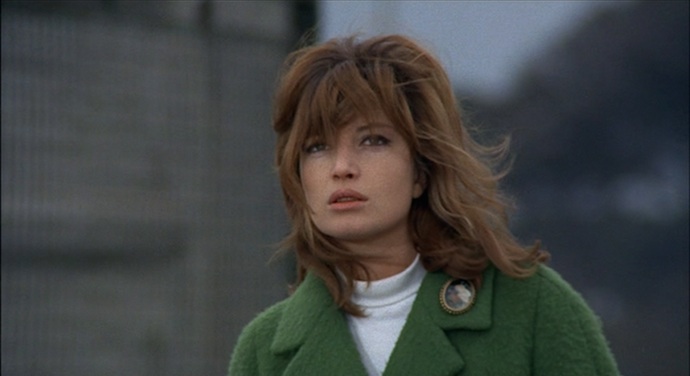 She is Marco Polo in a world of visible technicolor cities. The boy is what she remembers. 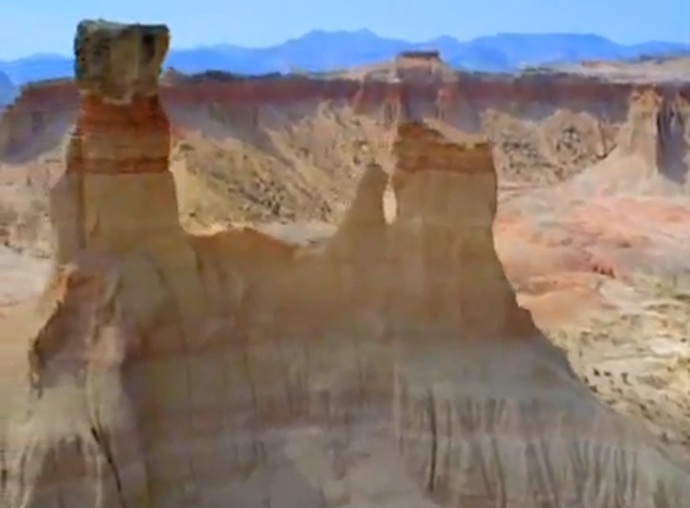 Steel guitar with a slide, desert landmarks, birds of prey, passing by. 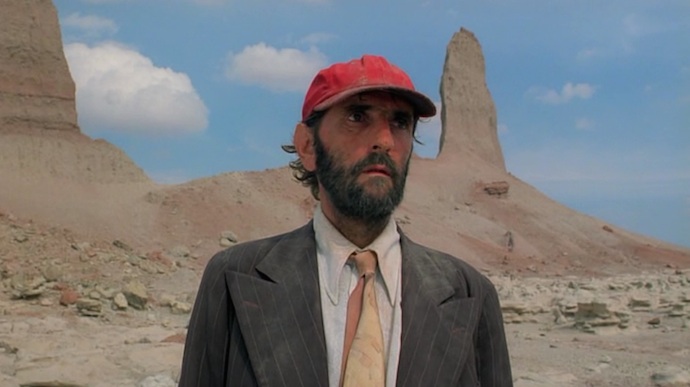 Red hat wandering, dropping an empty jug in one spot, picking up a new jug in another. The mirage is the desert, reiterated, while the boy (not present) is the real thing.

To imagine these two excerpts, played back to back, on a loop. Twenty years apart, compressed to an instantaneous interval. A cut is enough to create a dialogue. Red hat addressing green coat over there, What event are you walking away from. Green coat responds with a question but doesn’t say anything.

A cut is enough to put two spaces in dialogue. (Maya Deren: “unexpected simultaneities.”) Industry is introduced into desert landscape. Would this dialogue adhere to the 180 degree rule. 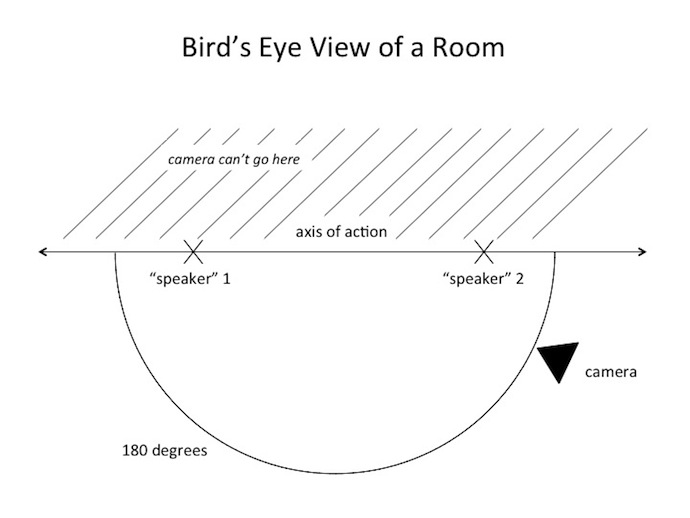 The 180 degree rule is a tenet of classical continuity editing. If two characters are in dialogue, the camera must capture them as though it were a third party, stationary, silent, watching the exchange. There is a line (the axis of action) drawn between the two speakers that the camera cannot cross. If the camera suddenly changes position between lines of dialogue and crosses the line, the viewer is disoriented. The viewer can’t tell where the two speakers are standing in relation to each other.

(A line is a collaboration between two points that can’t be severed, only repositioned.)

But can’t the camera move— that is, doesn’t the listener sometimes meander while the stationary speakers stand their ground. Why isn’t she looking at me. This is the erotics of the camera. The listener moves between desert plateau and industrial crane, as red hat and green coat exchange histories without speaking. The listener, ignored, absorbs the time of both speakers: their specific present moments in time, as well as the past events they walk away from— all while the listener travels between times, the time of the desert, the time of the industrial landscape— as time passes in each of these locales.

Chris Marker writes, in his essay, “A Free Replay: Notes on Vertigo,” that a character from Hitchcock’s Vertigo manages to “overcome the most irreparable damage caused by time.” How is this possible? The character in question (Scottie, Vertigo’s tragic hero) overcomes time’s damage by “recovering” a lost love. But how can time be undone? The voice-over that narrates Marker’s montage/ essay/ dream, Sans Soleil (1983), quotes Samura Koichi:

A mathematical limit is approached by a function but unreachable, such as the divine is unattainable, such as dictates erotic desire—if the hurt of separation has a limit, then we may say that we desire loss, in some way—the outer limit or the fullest extent of sweet pain (or, as Anne Carson provides an ancient Greek definition of eros, the bittersweet). We are not supposed to reach that limit. But if, like Koichi says, time eradicates the limit of separation’s hurt, does this mean that the edging around the hurt dissipates—or does it mean that we cross the threshold of that limit, exceed it, and plunge into the pain, annihilated or sublimed. For Marker, I think it’s the latter. But how, exactly, is it possible to overcome time, when time is capable of annihilating the self in pain? This is a real war.

Marker re-visits annihilation—or at least the act of hiding, of the sublime (the scientific definition of sublime: transformation in an act of disappearance)—in his films, even in the text, the voice-overs. For instance, when he notes that censorship “points to the absolute while hiding it. That’s what religion has always done” (Sans Soleil). Or the absolute, the self, that becomes a nuisance, and thus goes into hiding via neglect, such as in La Jetée: “The man doesn’t die, nor does he go mad. He suffers. They continue.” Suffering, here, does not plunge the self beyond the limit of separation, but beyond the limit of concern—beyond the notice of even a spectator.

We lay down a cloak over something to make it unseen. The cloak is often language. Calling something good, someone a hero, cloaks the unsavory parts, the interesting parts. Changing your name, what are you hiding. When you can’t bring yourself to return but continually orbit home aren’t you constantly returning. Bad behavior is a term invented to describe boldness, to ensure that only the bold are attracted to subversive acts. Pulling back the cloak, we fail when we assume that one revelation is the final revelation. There are multiple folds in any cloak, and we think we’ve uncovered the truth, it’s just the shape of something else underneath, something unseen.

I go walking to be not seen.

In a class on film poetics, Sara Veglahn points out, in Sans Soleil, the statue of Rousseau on the Isle de France; she mentions Rousseau’s Reveries of a Solitary Walker. Rousseau writes a series of promenades, reflections on past confessions in the open air of a “solitary walk”: “These hours of solitude and meditation are the only ones of the day in which I am fully myself and for myself… where I can truly say I am that which nature has designed.”

I thought about W.G. Sebald while watching Sans Soleil, this time around— especially the chapter in which Marker imagines the walker who loses time in a hypothetical science fiction film he calls Sunless. I thought of Rings of Saturn and its ambling time traveler. What about walking is cosmic. Besides that celestial bodies exist somewhere between a past we see and a present we can’t.

A figure wandering in vivid color away from the past but somehow ending up back there again. 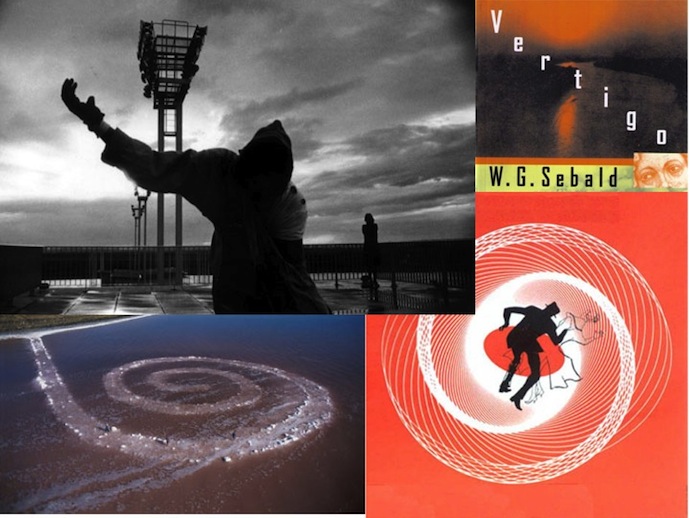 Susan Sontag, in “A Mind in Mourning,” describes W.G. Sebald’s ambulatory narrator as a promeneur solitaire, “a solitary, even when a companion is mentioned.” The solitude is necessary to the endeavor, so that “the narrator is ready to undertake journeys at whim, to follow some flare-up of curiosity about a life that has ended” (Sontag 42).

But when the life that has ended is your own. (Thinking of Blanchot’s The Last Man, the man who was dead, is now dying.) Attracted by gravitational pull to the flare-up of your own supernova.

Or when the walk is interrupted by an encounter: a binary star system on the brink of immolation.

It’s been a few years since I read Rings of Saturn. The ferryman at the end. What happens with the ferryman. Is he not there. A star that has ended.

A version of this essay originally appeared in Tract/Trace: an investigative journal.