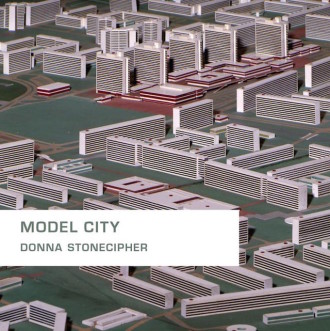 A city, by definition, is a geography of insides. As in, a city contains an inside where people can live, an inside people leave empty, because they prefer knowing the potential to be inside there makes the city appear ready for potential. Potential openly insisting on the existence of “inside” being everywhere an inside could exist. Where else is potential supposed to reside, and how else to store that something potentially spectacular, unless it’s inside there. And then there are all the insides that the city has been inside of for many years: sometimes washing the walls, rubbing down the surfaces that were totally worn down by previous residents, washing the ground floor windows. Sometimes letting everything inside go to ruin, sometimes just waiting for whatever or whoever the next inhabitant will be. These are the working materials of Donna Stonecipher’s new book, Model City. Which, at its most basic level, is building a city. From what? From plastic, interlocking building blocks? From memories of visiting obscure parts of the city? From the impression she had while the city was being built up around her of what that new city would actually start to be or feel like or represent or redefine or mistake itself for.

Model City could, on one level, be categorized as a world in miniature. It is always a temptation to oversimplify–like the fun irony played out in Italo Calvino’s Invisible Cities, where the narrator travels the entirety of an empire and the only conistency seems to be the narrator’s method of description. Always fantastical. Always poised. And always so assured that every city, no matter how preposterous its construction, has a reason for being constructed in that way. No city is designed towards a mistake. It’s an easy relationship to draw between Calvino and Stonecipher, where Stonecipher so commonly refers to the ideal city or the plans for what a city should be. But the operating contrast between the two books is that Calvino proposes multiple cities, and Stonecipher offers up a single city posing as model, sometimes posing as itself in the abstract, and the life of that single city continues to grow ever more complex as the speaker realizes how inescapable complexity is.

A more interesting correlation can be drawn to Steven Millhauser’s story, “The Other Town.” In the story, people in one town have built an exact replica of their town on the other side of a small strip of woods. The story operates the way many Milhauser stories do, where the preposterous is made increasingly more preposterous. This replica town is not only all the same buildings built with all the same dimensions. It operates as a real-time replica. If a window is broken on one house, then that window will need to be broken on the replica house until the window can be repaired, at which time the replica window will be repaired. And it goes further and further. From parcels that arrive on any given porch to the shape of trees and greenery down to the number of branches and casting of shade, even the cracks in the ceiling are replicated in “The Other Town.” There is no end to Millhauser’s ridiculousness.

But Stonecipher’s Model City is not about such figured abstraction. Both Milhauser’s “Other Town” and Stonecipher’s City have the quality of “being observed by someone uniquely qualified to be observing a city” about them. The primary difference between them is Milhauser’s ridiculousness versus Stonecipher’s willed conceptual frame, which is not to say that the reader experiences Stonecipher’s city with any less immediacy. Only that the model city we’re asked to consider in the opening (“What was it like?” is the question posed as an epigraph to the book) is consistently related to us via the remove of simile. “It was like…” opens each prose stanza. In “Model City [1],” for instance:

It was like slowly becoming aware one winter that there are new buildings going up all over your city, and then realizing that every single one of them is a hotel.

The poem asks that we first consider what it’s like to see your city as a site of new construction, a reasonable impression that might lead you to change what you think of your city. Then the poem tips that impression to the fantastical by claiming all the rooms are hotel rooms–especially empty hotel rooms. All this is normal poetic troping on the city as a means of thinking about organized life and civilization. However, Stonecipher’s poem insists on an additional remove. The image of a city full of empty hotel rooms is what the speaker would compare to the model city. Meaning whatever or wherever this model city, one way for the reader to understand it is to imagine there were a city that had all empty hotel rooms.

If this were the extent of Stonecipher’s book–a series of 70+ poems, each posing an odd fantastical angle for considering what a city might be, how it might stand in for the model of a city–I would have been disappointed. Stonecipher is assuredly the poet of the series. The Reservoir and The Cosmopolitan are books of the prose stanza, and they are books of the spiraling center standing in for some realization you feel yourself reaching for without actually getting to touch it; and maybe by not touching it, you start to realize the reaching in itself is a poetic act. Like that meme of Hillary Clinton when she was Secretary of State looking at her phone: something in the iteration of it fundamentally changed my thoughts about Clinton, because I kept seeing Clinton as this inexplicable combination of cool and competent. Like she’s Ryan Gosling and Charlize Theron and Amy Poehler wrapped up in one.

All to say, Stonecipher is aware of the layers building upon a city that make it not just the city it is, but the city-like, the city-inhabited, the city-aspiring, the city-lived-upon, and all these layers have their own insides to them, making the population of city an opportunity for infinite regress. Here is “Model City [14]”:

It was like walking past a person taking photographs of a white Bauhaus building and suddenly deciding to enter the building, to insist on an interior in the face of the photographer’s insistence on facade.

Need I continue? Regress from entering a building because the building represents an idea (the Bauhaus Movement) to figuration of the idea and figured giving-over to that idea by leaping into the dark pond, which seems to be whatever feeling the Bauhaus Movement evokes as a conceptual frame. I should let the regress continue. Stonecipher does. Juxtaposition, reposition, elucidation, confiscation, eradication, even vacations are allowed. Like thumbing through a Sears Catalogue in the 1980s, where it seemed like this was the ideal store, this is what possibility felt like before there was the internet. One should adore the Model City. One should envy it. One should voyeur it. There is something about objectifying a city, which is your intimate surroundings, as well as those intimate spaces you’re not allowed into. Perhaps any one citizen has the capacity to map the city, or build the city in miniature, but what value is that miniature without understanding everything there. Says Stonecipher: Best of luck figuring out that “everything there” part.