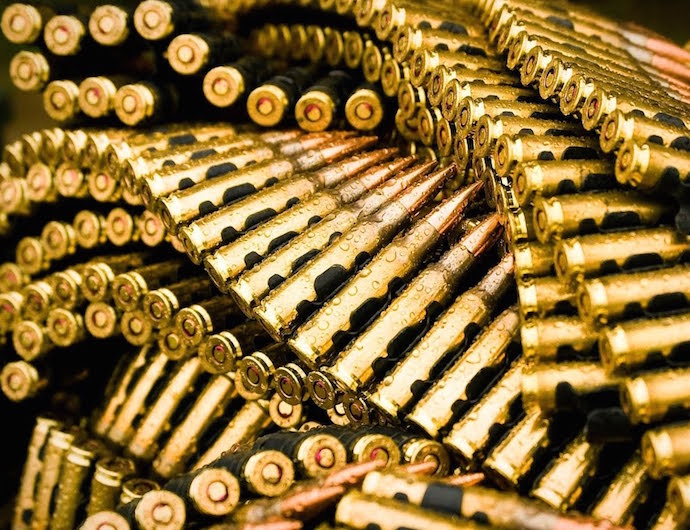 BECAUSE HE STUCK TO HIS GUNS

He gathered up the arsenal and arranged them around the living room like friends. He had his tablet hooked up to the projector and the first slide of the two-slide presentation projected onto the wall. It read: Guns Don’t Kill People, the Clintons Kill People! He cleared his throat and addressed the baker’s dozen of AR-15’s splayed on the IKEA couch, the handful of handguns hanging out on the loveseat, and his brand-new rocket launcher on the rug. He repeated the hook, said, “That’s right! Guns don’t kill people, the Clintons kill people.” He chuckled, shook his head, and said, “I thought I’d start things off this evening with some light humor here because who doesn’t appreciate a good joke other than, say, the Commie-Marxist-gun-grabbing hippies who’ve prompted us all to gather here en masse at 424 Sycamore Street in order to protect 424 Sycamore from the idiots of the outside world of which there are plenty. Let’s get down to business.” He clicked the clicker and a new slide shone on the wall. Pictured now was a vintage black and white shot of a couple of mustached pugilists braining each other in the olden times with their bare-knuckled fists over a caption that read in bright-red lettering: Guns Don’t Kill People, People Kill People! He exhaled slowly, said to his guns, “Look guns, I know that you cannot see because you don’t have eyes because you are, after all, guns, but if you actually had eyes like me what you’d be seeing is a cogent illustration of man’s hatred of man. I swear to God…” He picked up a Bible from the entertainment center and held it aloft liked the first-born child he never had and smacked it on its rear. He said unto his guns, “I swear to God, guns, that I’m swearing to God right now and that my hand is on the Bible and that means that I mean it as Gospel when I say that I agree vehemently with God’s son, Jesus Christ, and especially what God Jr. said about loving your enemies. I, too, love my enemies but I certainly wouldn’t love them were it not for the help of you, my guns, and so I say to you now, my brothers in arms, that I love you all like brothers every single one and that you getting a bad rap these days on account of all the morons in the world makes me angry!” And in his anger, he set down the Bible and picked up a gun, a nice new nine-millimeter he’d bought an hour earlier, and shot the hell out of the Bible with it. Little chunks of Gospel spread across the carpet and floor and he felt a throb of passion in his pants until he ran out of bullets and it ruined the mood. Outside, the sun was setting or had set. Inside, he was in a dark place. The lights were off. He felt tired, too. Physically. Mentally. He gathered his guns and went to back to the bedroom. It’d been six months since he’d slept with his wife. She’d told him she wouldn’t step foot in the house again until the guns were gone, but he’d stuck to his guns and with them. Now, as he put his head to the pillow and placed his arms around his rocket launcher, he adjusted the covers and closed his eyes and prepared himself for the new nightmares.

They were handing out handguns outside the grocery. If you didn’t own any bullets, it didn’t matter. They’d throw in some along with the gun as long as you signed on the line. All you had to do was initial a little waiver saying that our current government was truly the best government and also agree to the terms. There were pages of terms, too many pages and too many terms. I didn’t read a word. I flipped through the sheets and skipped to the end. I signed my name, my ex-wife’s name, and the name of my current landlord and soon enough I had more handguns than hands and I also had a grocery bag full of bullets all thanks to the new government initiative for folks who showed initiative for less government and more guns. Afterward, everywhere I went everyone was shooting everything. At the park, toddlers were toddling around with their firearms firing blanks in the sandbox as their nannies sat on nearby benches blasting pigeons with Berettas. In the high school parking lot, school was letting out and all the high school kids were high, popping caps in the air to really celebrate the day. Today, see, there was so much to celebrate about America according to the government, which according to the government was truly the best government in the history of all governments. Today, there was so much to celebrate about today. See it was Celebrate the Second Amendment Day in America and anyone who wanted a gun got one and everyone else had to run away fast. I took my new guns and ammo back to my crappy, old apartment in the newly-historic district and then I shot everything in my apartment until there was nothing left and my landlord showed up and shot me in the arm so I shot him in the foot and when the paramedics arrived we teamed up and had ourselves a little shootout and lost. At the hospital with the rest of the losers, we waited in the waiting room for a very long time. My landlord and I held hands because we were scared of everything, especially each other. News was breaking on the television in the waiting room and we watched it as we waited. Tonight’s news was filled with so much patriotism and lead. Just like us.

Ryan Ridge is the author of four books, the most recent of which is Second Acts in American Lives, a collection of stories coauthored with Mel Bosworth. An assistant professor at Weber State University, he lives in Salt Lake City, Utah, and edits the literary magazine Juked.