A SPIKE IN TEEN PREGNANCY

A clown at the county fair accused my wife of animal husbandry. I said it’s a good thing I never know what to do or say or I’d do or say something right now. It was sunset. You said, “C’mon.” We rolled up our lives like sleeping bags and headed toward brighter colors and louder music. Then we stood beneath the Ferris wheel with our arms outstretched, hoping to gather whatever unwanted lumps tumbled from the baskets. We agreed to work together. We agreed to stop at a smiling baby. 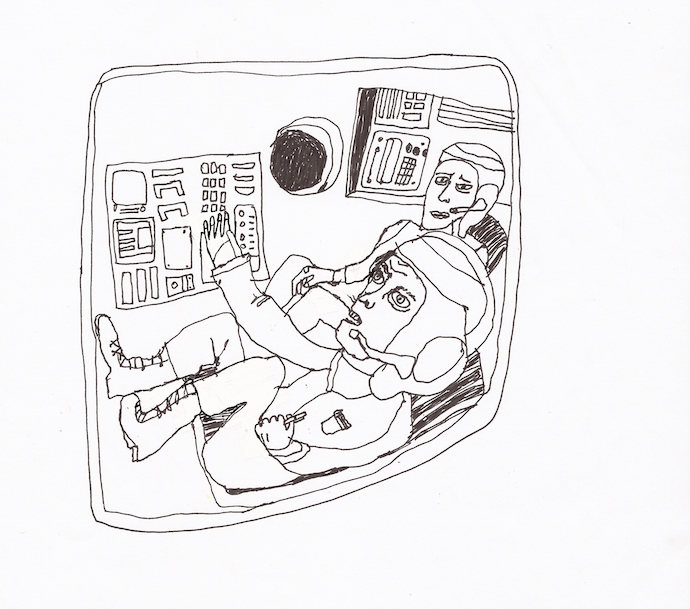 Dad said, “Son, I’ve got some real strange news.” He said, “I’ve built a spaceship. Your mother and sister are gone already. We’re leaving this afternoon. Can I make you a sandwich?” I said, “I’d rather have soup.” Dad said, “Soup it is.” Inside the spaceship, Dad worked the gears and sang ‘Sweet Caroline.’ Then we hit warp speed. My eyes felt like ribbons fluttering goodbye to the pinhole life in our fiery wake. We scorched gobs of dark matter. We punched through the guts of wormholes. Dad hoped he could successfully reunite us with Mom and sis. I hoped we didn’t crash into ourselves coming the other way.

Mel Bosworth is the author of the novel Freight and the poetry chapbook Every Laundromat in the World. A former series editor for the Wigleaf Top 50, he is the creator & curator of the Small Press Book Review. Mel lives, breathes, writes, and works in Western Massachusetts.

Jacob Heustis is a native of Louisville, Kentucky, where he lives and works. In 2004, he had his first solo exhibition at Swanson Reed Contemporary and has shown in numerous group exhibitions and solo shows since. He has also designed album covers for the indie bands Wax Fang, Silver Tongues, and Whistle Peak, among others. His work is held by several public and private collections.

Ryan Ridge is the author of the story collection Hunters & Gamblers and the poetry collection Ox, as well as the chapbooks Hey, it’s America and 22nd Century Man. The University of Michigan Press released his latest book, American Homes, in 2015. He lives in Louisville, Kentucky, where he edits Juked.

Book trailer. (Animation by Ryan MacDonald based Jacob Heustis’ illustrations for the book)