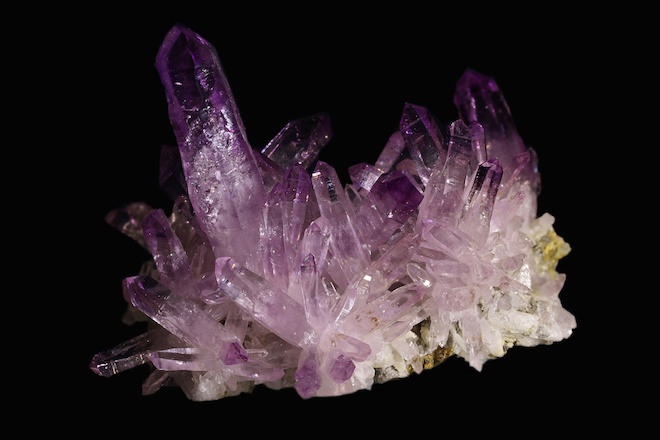 You thought I was a psychic when we first met. You thought this because I lied to you and you wanted to believe it. I laughed at the joke you made, the one about my name being Crystal and my believing in the power of crystals. It was corny. You were corny, standing there at my booth at the Sedona street fair in your work boots, dusty red from the ride, but the skin around your eyes was smooth. You scooped me up out of the vortex and took me to your home, and you kept me. And I let you. You looked valiant with your hands in your pockets.

First thing was, you had a daughter and she hated me. Second thing, you fucked other women. You still fuck other women. But your daughter left, and now it doesn’t feel like she hates anyone as long as they give her exactly what she wants when she wants it no questions asked. You had more money than you knew how to spend, so you sold your business and became a volunteer crossing guard. I called you a loser. You hired that Roy Orbison impersonator for our wedding in the Intimate Garden, behind the pool at Caesar’s Palace. We saw him blow all that cocaine behind the Snackus Maximus after he pronounced us man and wife, and before he took the stage. And then he did “Pretty Woman,” only faster than anyone had ever done it, ever, like this:

You told me that you liked the sound of my jingling bracelets as I gripped the mattress, and I knew you’d thought I was a real psychic when the Roy Orbison impersonator married us. You asked what would happen five years down the line, and I said I didn’t want to ruin the surprise. Only, you ruined the surprise by fucking other women.

And there was that one night. The one when you came home late with the back of your hair tangled into a knot and I was scrubbing the floor and crying, and my bracelets were jingling, and you put on your Roy Orbison record and played “Pretty Woman” on the fastest setting and boiled us some spaghetti. It looked like that opening scene in E.T., when they’re eating dinner and the lighting is soft and yellow and they don’t know E.T. exists yet. I told you that, I said all of that out loud to you, and you choked on your spaghetti and we both laughed.

Your daughter was supposed to come home for the holidays and so we figured, let’s decorate, and step one is a tree. We went hunting for a Christmas tree, and it was warm out, and we found the perfect one. Only, it only looked perfect as it stood in the ground. As we roped the tree onto the roof of the Jeep we realized it was too tall for the living room, and sparse in spots, and maybe had a fungus.

And so we argued as we drove down the highway, about the Christmas tree and about that woman you’d fucked at the ski lodge on your mancation and about the idea of a mancation, and the name, “mancation,” and what kind of real man needs that sort of thing. I said, actually, that woman was more a of a girl and was your daughter’s age. And then I said, I’ll never tell you how I know, just know that I know. And you didn’t say anything, but you did jam a Big Gulp straw into the tape deck.

You ran over a bag of trash on the highway while you were busy breaking the tape deck, and it felt like the Jeep would flip. Only, it didn’t, but we did lose the tree in the middle lane, and we both watched in the rearview mirror as that Snap-On truck ran it over. Didn’t even brake, just flattened the thing and kept moving. Only, I’d just insulted your manhood and your mancation and made you feel guilty about Latrisse from the ski lodge all at once.

You veered off the highway into some dried brush and put on your crossing guard vest, all rumpled in the back seat. I watched you run out onto the highway, sort of scuttled out there, blinding me every so often with your wrinkled reflector tape. You looked like an old man for the first time, I thought, but also valiant. You picked up the tree in several pieces and stood on the dotted white line as cars whizzed past and honked and you could’ve died, but you still tried to grab the rope. I shouted to you LEAVE IT, LEAVE IT PLEASE AND COME BACK TO THE CAR, like I was having a premonition. Only you didn’t leave it. We stuffed the pieces of our huge smashed tree into the backseat of the Jeep, and the sap never came out of the seats, and it smelled like Christmas until August. That night I made a wreath out of the flattened tree pieces, and your daughter arrived home with a purple hickey and threw a slice of pizza at the fairy mural I painted in the kitchen, and my bracelets clanged together when you squeezed my shoulders, and no one was sorry for anything.

I had a dream that I was forcing you to eat General Tso flavored potato chips. Only this time, you sputtered and spit them. Little grains of salt and neon red crumbs stuck to the stubble around your lips. Your hands were tied behind your back and you kicked ferociously. We were around a campfire. During the struggle and while I was wiping chip grease on my cargo shorts, the key to your handcuffs flew into the air and dropped into a pot of baked beans cooking over the fire.

Anyway, all the shit stuck all over your face was most unflattering, so I licked it off while you kicked and screamed. It was for your own good. We had no napkins! What kind of hostage has food stuck all over their face? The expendable kind, that’s what kind.

I woke up with General Tso flavored potato chip crumbs under my fingernails. How absurd, I thought, but then remembered falling asleep with the bag on my chest. The title menu for my Dennis the Menace DVD played on a loop all night, the eerily zany 15-second soundtrack repeating, searing the edges of the tune into my brain. It was nice, except for smelling like Chinese food.

I took a quick rinse of a shower and thought about all that camping equipment in my basement. When I move, will you remind me to bring that stuff? My camping towel is down there. It’s smaller than a regular towel, that’s why it’s for camping. My camping toothbrush is down there too, but it’s not so important. Toothbrushes are already small. Get me my camping toothpicks! That was a joke. Mason puked on my tent last time we were in Pinetop and I didn’t clean it off. It baked in the sun and raccoons descended upon our tent the following night, clawing at the dried puke and nibbling on it. It’s nice that all that bratwurst didn’t go to waste. A real silver lining, ya know? I like stories like that.

So to your answer your question, I’ll definitely go out with you again. Name the day.

Leslie Burnette is a short fiction writer and hair stylist who resides in South Philly by way of Arizona. Recent domain name purchases include leslieburnette.com and myass.biz. One of those should be a website very soon.