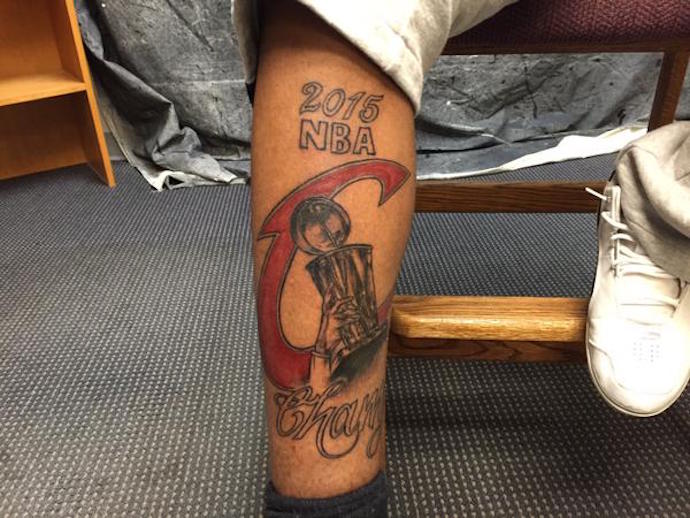 There’s a fine line between prescience and embarrassment. I saw a picture of someone’s tattoo today: a championship trophy with the Cleveland Cavaliers logo scrawled across his calf; 2015 written on top of it. It was easy enough to picture him at the shop with his friends who, all wearing LeBron jerseys, thought it was a stupid idea but vaguely respected him for having so much faith in their team. The artist asks if he’s sure. “Yeah, got good feeling about this,” he replies.

Days later, his friends offer high-fives and congratulate him for “knowing” the outcome of the game two days prior to it happening. They go to 7/11, get some snacks, and flash his tat to the cashier, who doesn’t give a shit about basketball. Then, as always, the season starts up again; a picture of someone else’s trophy limb goes viral.

But he was dead wrong; it was the Warriors’ win, which makes my face scrunch up thinking about.

That brave Cavs fan, whose name is Lonynell Coleman, defends his ink-choice on Twitter: “I’m not changing nothing on this tattoo. This year was a great one and this is always gonna be a memory.” I can respect that attitude. In the eighth grade, I told stories about fighting back muggers who’d slashed me, leaving a marshmallowy pink mark between the curves of my kneecaps (mostly to impress girls who weren’t into me); as I got older I’d started to admit that a dog, roughly the size of a furry pre-diabetic basketball, was responsible for the scar. We were in a pool swimming laps; Casper’s front claws tore into my leg. Owning up to that kind of defeat takes confidence. The embroidery becomes a memento to the summers spent playing with your uncle’s dog, not the blood and tears that mixed with chlorine in his Long Island pool.

Still, the part of me who can’t bear to look at his 0-12 online score in NBA 2K14 wonders if it wouldn’t have been easier for Coleman to have splurged on team apparel. Was it the physical sensation of getting a tattoo—the slight droning sting—that encapsulated his nostalgia? While tweets to Coleman were adamantly ignored, I managed to reach out to Juan Bustillos who, as luck would have it, has a full-sized portrait of LeBron James splotched across his forearm.

He’d agreed to an interview on terms I’d plug his new business (find out more on his Instagram @bustillosthebarber). Bustillos admits, “LeBron’s always been my favorite player. Growing up, I’d say he was my brother. The image of him winning the championship [with the Miami Heat, not the Cavs, to Coleman’s dismay] is one I’ll have forever.”

What’s the response been to your tattoo? “People ask about it all the time. Some think I’m crazy; others love it. Strangers, like this one guy at the Nike store, have asked for pictures with it.”

Has anyone clowned you after this year’s loss? “Win or lose, LeBron’s still the greatest.”

Ok, I respond, but what do you think he’d say about your ink? “I’m not the first or last person to do it.”

Dustin Yip, who works at Skanvas Tattoo, has third-party experience with sports-related body art; he stirred the net when a picture of one of his projects, an arm-length piece of Kobe Byrant chewing his jersey (which I later learned was done on his long-time pal Spencer), made the rounds online. When asked how frequently he gets requests for athlete-inspired work he says, “Not too often,” deeming his time with Spencer “a fun experience” that “brought up a lot of old high school stories.” “We used to be on the same basketball team, so we’d mostly talked crap about other players and made fun of our old coaches: things the public wouldn’t understand.”

My uncle put Casper to sleep last summer. Hearing the news I kept rubbing my kneecap. Cataracts had widened over both his pupils. He’d begun to shit himself. It depressed me but only to the point of not calling him stupid in his last weeks, which I’d been doing since that day he’d scarred me. I still laughed and recorded videos whenever he bumped into glass doors. What remains of that dog is a personal blemish, not unlike Coleman’s reblogged-and-ridiculed misfire. Maybe the line between an interesting story and cringe fodder is unlike any you’d find on a basketball court; it’s a strand of nostalgia not seen from the sidelines.

Nevertheless, sport iconography works on a cycle of agony and achievement; it’s spun by everyone from the players to the audience. The only places where LeBron can remain unscathed are on discontinued versions of 2K and in the hearts of his superfans. To everyone else, he’s bound to flop and miss; shoot and score.

On the topic of Coleman’s failed prophecy, Yip said, “I’d tell him the Cavs better win sometime before he dies.”

Should he have gotten it covered up? “People come into my shop for all sorts of alterations, but they’re never sports-related. I think that’s more of a commitment than something like a girlfriend’s name.”