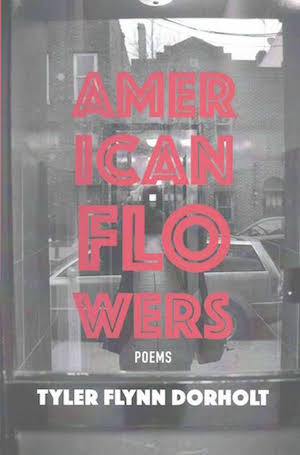 Do not underestimate what Tyler Flynn Dorholt is willing to undertake in the quest to achieve his vision. American Flowers arrives as the first book of poetry released by Seattle’s Dock Street Press, and Editor and Publisher Dane Bahr could not have selected a title with a bolder claim on American poetic idiom than Dorholt’s debut. In 2013, John Yau selected Modern Camping as a winner of the Poetry Society of America’s Chapbook Fellowship, while two other of Dorholt’s chapbooks have been published or are forthcoming by Greying Ghost, one of New England’s indie mainstay publishers. Coast-to-coast, these titles will give readers a sense of Dorholt’s commitment to the long, difficult, and ultimately illuminating poetic project. American Flowers proves to be the author’s opportunity to push his poetic agenda forward.

American Flowers weighs in at just over 250 pages of densely packed prose paragraphs and photographs taken mainly during the author’s artistic apprenticeship in New York City. (The epigraph acknowledges Michael Trossman and Wendy Weil.) As an introduction to the book, I offer one paragraph of the hundreds, from the sixth of six sections of the book, in full:

Flight, how at once how at one it is, to toddle for the trains & getting through urban life handling the pains, how the best thing about New York City is that whatever energy you have it can be matched if you walk the streets with yourself as source, that what is fleeting can sometimes be caught, nibbled, two-stepped, smacked or swarmed, & that if it’s beyond just moments then you might be hanging on, that ability to see a street corner & recall what you did there the night you left out time, where breath took walking into pure tune, the plane again courting lines toward their arteries, the heart romping on w/o batteries.

The book is a tracing of how memory works rather than a collection of memories; it is an effort to articulate the feeling itself rather than the reflection on the feeling. As such, Dorholt’s book, articulated in single-sentence statements that are more often fragment than complete thought in the grammatical sense, offer the mind’s initial rather than filtered sense of moment: “the hands that hold our leave,” “brawl the skies from outside your window,” “a jacket full of smashed watch.”

The easy comparison to a book like Dorholt’s is to Ashbery’s prosaic meditations, Three Poems or Flow Chart, where our tether to each tangibility that enters the text is qualified by a refraction through the speaker’s rendering of the act of apprehension: “passing around us are the thinner hands the city licks into buttons, crushing from function … as the glow of our arrival pertains to localities just outside of survival.” But unlike Ashbery, Dorholt is as much an unfiltered human being as a gifted crafter of abstraction: “It hasn’t changed, man, the entire awareness of city, that no point was ever made w/o smoking out wonder, inhabiting larger categories when enshrouded by fate, faces paving into themselves over time.” Where Ashbery would’ve loved that faces might pave themselves, Dorholt is willing to disintegrate his images as much as celebrate them.

The author’s photographs seem to enter the text in the spirit of answering the questions the poem poses. To whom do the pronouns refer? To the silhouettes of two people in a field, to the woman caught on the sidewalk, to the man in the window that some would recognize as poets Sean Francis, Jennifer Tamayo, Ted Dodson, and Ken L. Walker among others. And through these photographs, as well as through Dorholt’s more reflective writing (“I’ve done this before … left myself at myself, content if deposited in what comes around sense”), we begin to understand American Flowers as an assemblage of unmitigated experience, a collage of the poet’s life with less concern for the product than the process.

Dorholt’s poems feel naturally off-the-cuff, impromptu, ready-to-hand. We see this through his indulgence is spontaneous rhyme (“your body unpeels its shake when you sleep & awakens to drape its take against societal mistakes”; “Pull your dream all the way out & live a little bit of it, sliver & slant in the land, where you’ve been in your history again doing pushups above the tome then darning the walls with forests to gloam”; “I can’t veer where you are laying, I cannot relieve what you are saying in the particular lean”; “Reflection is no different here than there, but we always attract the unaware in our stare”). The effect is that playfulness in American Flowers exists alongside elegy. The act of reconstructing the feeling of the moment is as full of ebullience as it is of gravitas. This is potentially Dorholt’s most incredible achievement: He is unwilling to treat memories as precious while he is determined to enshrine them. It is a democratizing force that his book enacts, and one that remains heartily apolitical and firmly personal.

Thusly, the mood of American Flowers changes radically, section-to-section, and even poem-to-poem. The aim seems to be less to present a cohesive whole than to present the whole human. Poems begin with idiosyncratic self-talk (“Put on your warrior face”; “Land on your back”; “Please relieve me w/o bother for I have tinned the odd escape & taken drugs into the drapery & inscape”), as well as performative playfulness (“Fuck you, full moon,” “Dear Light, as in repose”), and also persona (“I have not told you yet but I’ve been putting on a suit & sleeping in every park around, waking up to feel my cigarettes smashed & piecing them back into freckled suck”), each of which might, at any time, delve into a confessional mode (“I’ve climbed too far into this mess of images not my own, that I knew existentialism briefly but then my hair grew out”). There is more than one Dorholt, but we contain multitudes, do we not?

Reading the book, one feels never at center, nor even at a point of progress from one paragraph to the next. Formally, this is due to the way Dorholt assumes the form of the sentence (with end-stopped punctuation at the terminus of each one-sentence paragraph) while most of the paragraphs amount to less-than-complete statements, effectively noun phrases (“What you feel as the breeze accompanies what you see for the first time & alone,” “Tracing from a cup your hand, your feeling, how everything unreels when you begin the day”) without finite verbs. As these accumulate, by the dozen, one feels out to sea, without a shore, afloat in impression, in tense, in proper nouns that are more often concepts than actual places or things (“Low shorts, shade on the high thigh, heat pretending to be a crick, Hollywood stuck on a Shanghai, other languages nothing more than your feet planted on the reverse pocket of the pond”; “I’m poised to take the Europe out of all of us if we can take this entire road with our mood closed”; “what Europe did secretly to surpass living in stately asides, perplexed by rent & leaning high-rises bent against the Hudson to repent”). But is this not how we live?

It is. And this, essentially, is what American Flowers seeks to express: the way we actually live and actually think is not perfect, is not ideal but practical. Ought not be overly crafted. When we take our intellectual armor down and face the rawness of our emotional processing of the world, as Dorholt writes, “It’s another day & we’re still throwing the world down within its sounds.” But better, and speaking more toward the book’s stay against the notion of progress, the poet writes, “Sure enough, I’m here again but it’s not starting over.” American Flowers reflects that experience, something we have all known, of our inability to start over, our inability to forget, our inability to perfect the way that we say things to ourselves.

To this imperfection, Dorholt has written a hugely impressive book. You will be asked to go on a journey when you read American Flowers, but don’t be so naive as to ask why. The answer is in the experience. And there is no better proof of the worth of that experience than what you will come away with, on your own.