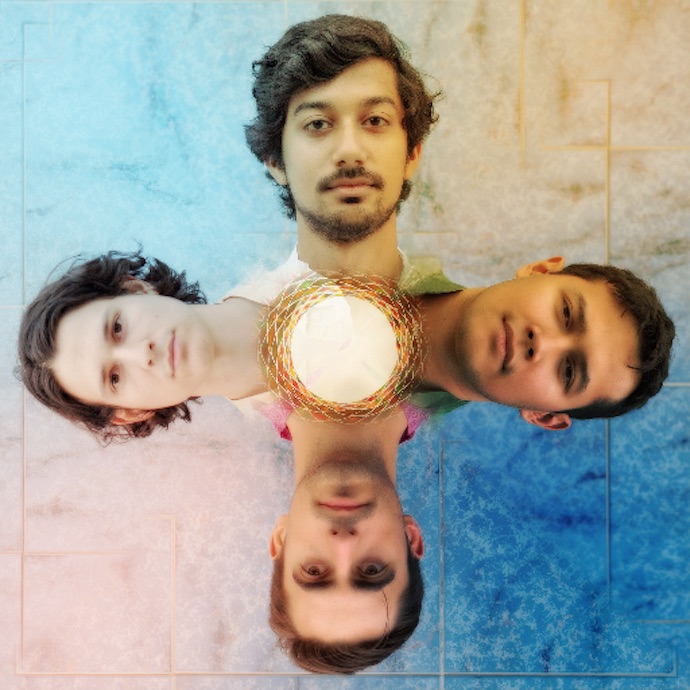 Newly-minted Brooklyn quartet Humeysha exists at a unique intersection, merging the cinematic formality of Bollywood and geometric repetition of Islamic art with dreamy guitar riffs over trance beats. As with “Burma Between You and Me,” their fabulous last release, a hallucinatory experience challenges conceptions of tradition and heritage in their new single/video, “For Love from the Law.”

Zain Alam, the project’s founder, draws strongly from his own stories of familial hardship in his parent’s migration from Pakistan to America, as well as his year spent in India as a Clinton Fellow researching the tragic 1947 Partition between Pakistan and India, a violent event displacing roughly 14 million people.

In “For Love from The Law,” an interesting idea is explored: making music that sounds how Islamic art looks. Layered, hypnotic progressions resemble a stripped down Panda Bear or mid-2000’s Black Dice. An amalgamation of past and present, lyrics move between Hindi Urdu and English, drawing heavily from Sufi poetry, Pakistani folk music, and bands like My Bloody Valentine and Deerhunter.

Alam’s philosophy lies in evolution, expanding on existing framework to create something new and wonderful. We spoke via phone to discuss the thematic elements driving Humeysha and his love for J Dilla.

Where is your family from?

That is somewhat of a complicated question. The way I always thought of it was that they’re from Pakistan, because they were both Pakistani citizens when they immigrated to the US. As I grew older, I learned my dad was actually born in India, but taken to Pakistan a few years later. It was never documented that he was born in India, his birth certificate was made after the fact in Pakistan. A lot of what you see, in terms of me exploring the subject matter and geography and the lyrics and the music in Humeysha, is me kind of figuring out the site of my family origin. I usually like to say both when people ask.

Were you born in America?

I was born in America. Flushing, Queens. We lived here for a few years before my parents decided to move down to the South, to Marietta, Georgia, where it was warmer, where they could get a car and have a big house. I lived there until I went to Wesleyan.

How did Humeysha come to be?

Some of the songs on the self-titled album existed as loops I’d recorded as early as my sophomore/junior year at Wesleyan. The project itself didn’t really come to realization until I went to India the year after I graduated as a Clinton Fellow working for the 1947 Partition Archive. I wrote my thesis on my family, how people were scattered after the Partition between India and Pakistan. In the year that I was there, the first five months I was in Lucknow, India, where my Dad was born. It was a strange time of being in my ancestral city, where I don’t speak the language though I look like everybody else, realizing it is a very conservative, very Islamic, old-style type of place that feels stuck in time. Like, I’m kind of one of these people, but I also feel like such a foreigner, more than I’ve ever felt in my life. In that five months, I began putting together sounds I was recording as a Research Fellow for the Partition Archive, loops I was collecting on my phone, sounds from busses, trains, and temples, and also putting together loops from recordings, whether it was Pakistani folk songs or Bollywood soundtracks, which I had grown up with. I merged this with what I had done at Wesleyan, playing in rock bands, guitar, all that stuff. When I came back to New York, my best friend, Dylan Bostick, who is now the guitarist of the band, heard the demos and was like, let’s do this.

A lot of interesting music has come from recent Wesleyan graduates, can you talk a little about that scene?

When we were there, there was a strong sense of story, people who did really weird stuff were encouraged to be experimental and explore who they are. It’s a lineage you could probably say started with the band MGMT doing really off the wall, bonkers stuff when they there. From then, you have people like Heems (of Das Racist) doing something weird that ended up resonating with general audiences. After Heems, the person I had the most connection to in that line was Le1f, the rapper and extremely talented musician who ended up putting out the first Humeysha album. We all lived and supported one another in this house, where we would put on shows. People were involved in dance, they were involved in film, jamming in the hallways, listening to each other’s stuff. There was a sense that you have an amazing community and a wealth of resources to do whatever you want. It didn’t matter if it was weird or stupid, you were encouraged to try it.

What are some influences in terms of music and beyond?

Something that really reawakened itself to me when I was in India was childhood memory, a nostalgia for these songs I was hearing there. You’ve got your classics like R.D. Burman, Madan Mohan, and then in Pakistan you’ve got the folk people like Nusrat Fateh Ali Khan, who is really, really famous and revered amongst South Asians. In my later years and college, a lot of shoegaze influence. Loveless (My Bloody Valentine) was the album that inspired me to pick up a guitar. I’ve got a lot of hometown pride, being from Georgia, for Deerhunter, one of my favorite bands. Something else that might not be as obvious when listening to Humeysha, I have a very strong affinity for hip hop. The tradition of sampling, whether it be someone like J Dilla who is one of my favorite beat-makers, or so many other producers who sample, is a tool that allows one to really acknowledge influences, instead of just saying this is what I’m influenced by. Using that source material, putting a spin on it, saying you are part of the lineage, but also wanting to do something new.

Your work is centered largely around concepts of heritage and the pains of migration, elaborate.

What was interesting to me when I was doing all this work with the Archive was, when I went into it, I was thinking I would just be hearing over and over again really tragic stories and all the horrible things that happened to them. That was true, most of these stories were tragic and painful, there was a lot of emotion welt up in there, but what I was less expecting is how many people used that moment of struggle and suffering and trial to remake themselves, to overcome something, and not let the tragic component of the experience define them. I heard over 150 stories, and I began to see similarities between their stories and the trials of my own family. Right now, with all that’s going on with migrants and Muslims, the general xenophobia of living in this country, I would like for us to speak not just as people who have been wronged, but as people who are engaging in our own acts of self-creation and fashioning our own identities, whether it’s Indian-Americans, Pakistani-Americans, Muslim-Americans. Something unique that’s our own, able to draw from a number of traditions to make something completely new.

In ‘For Love from the Law,” a bridge is drawn between traditional Hindi imagery and more psychedelic visuals of now, which seems to work as a broader metaphor for the project. Can you talk about the merging of these two worlds?

Yes, and it’s not only Hindi imagery at work. As you can tell from the album artwork and other visual references in the project, a lot of Islamic art is at work as well. If you look at the lyrics, not that you can understand them always, there’s a lot of references to certain metaphors and images in Sufi literature and Sufi ways of thinking. What some would call psychedelic imagery, things you really want to get lost in, has certain connotations in the West, but there is also so much overlap between some of this Islamic poetry about finding god through the lover and all these things that you don’t necessarily associate Islam. Even a lot of the washy, pretty, shoegaze-y sound I’m doing kind of becomes a drone, a loop, and sounds kind of what Islamic art looks like: patterns, textured, geometric, repetitive. It’s an aesthetic overlap I feel I’ve just begun to explore and am fascinated by. Also, the question of where does it get offensive, does it get offensive to people of these faiths? But I think that’s the task at hand.

Check Humeysha out this week at their next live date:
June 12th: Brooklyn, NY at Northside Festival – Matchless
Tags: For Love from The Law, Humeysha, J Dilla