“To One Who Governs the Pauses”: LM Rivera’s The Drunkards, or The Book of Years and the Radiant Void 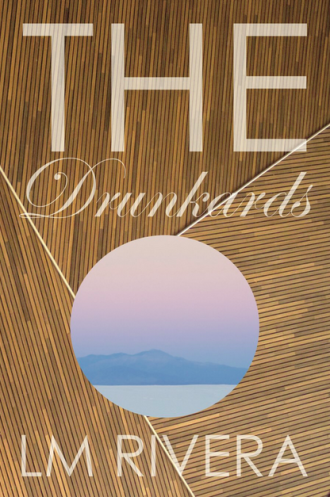 LM Rivera’s captivating debut collection, The Drunkards, or The Book of Years, presents ecstatic lyrical-philosophical excursions that simultaneously think, play, drink, and feel, inhabiting a fluid and open space where anything can happen and possibility is just within reach. In its opening pages the collection pairs images reminiscent of Jacques-Louis David’s The Death of Marat with revelatory quotations on drunkenness, including one from Jean-Luc Nancy’s Intoxication:

[when] a discourse on intoxication is announced, one might expect either a patient analysis of the specific characteristics of this condition and its significations (enthusiasm, the Dionysian, celebration) or a passionate exultation of excess, debauchery, distraction, and euphoria. Whether in fear or hope this is what one expects—either a sober discourse or a drunk discourse. Sobering up or inebriation. We might even think: reason or passion, philosophy or poetry.

Inspired by Nancy’s Intoxication, The Drunkards dissolves the borders and limits between reason and passion, situating itself at the center or nexus of philosophical and literary discourses concerned with relationships between poetry, philosophy, and altered states of being. The Drunkards carefully places quotes throughout its text like seedlings or breadcrumbs as a means of grounding the text while spurring further engagement, allowing readers to enter these discourses from numerous angles. In “The Post-Nietzschean Prelude” Rivera writes, “I am writing thusly against THE BOOK / contrary to what seemed to be the case / in contradistinction to book as fact / fictions open without slight resistance / unfolding infinite latitudes” and “in this dead writing / this silence turned to book turned to the blank / and back to the answer under question / pointing everlastingly into me / as we are the commanded entrances.” The Drunkards embraces both reader and writer as entrances of language where words and worlds proliferate and unfold prismatic, ‘infinite latitudes.’

Rivera’s poems are wonderfully drunk in their effervescence, playfulness, brightness, as well as in their stumbling poetic textures. The collection’s section titles draw readers in like vibrant, flickering neon signs: “A Deathprayer Overture, or Initial Deathprayers for the Indefinite,” “An Intro-Reduction,” “Epilogue: The Book of Devotional Cinema and Repetition in the Blank,” “Post-Script, or Immaculate Dreams Located in a Manuscript,” and others. Similarly, the poems bring readers close to their burning, lyrical heart:

I am writing as of now for THE BOOK
for THE BOOK OF THE CREATURELY OCCULT
as forceful as a colossal hammer
for THE BOOK OF HIS HOLINESS KAFKA
for THE BOOK OF PENNED ANONYMITY
and lastly for THE BOOK OF LUNACY
that finality alive on the page
Shylock, Josef, Yukel, and Bartleby
drifting in among the little rabbis
happening upon the tiniest one
with a burning gospel placed in each hand

The collection as a whole takes up its own making and creation as a point of focus, self-reflexivly beginning, re-beginning, and re-re-beginning the book and conceiving of it through different modes and frameworks. Rivera writes,

WHAT BEGAN AS THE NOVEL, LATER BURNED—
YET SOMEHOW CONTINUED AS SUCH—PERHAPS
SERVING THE READER—INVESTIGATING
THE LIKENESS—A NOVEL WRITTEN IN A
FINE DUST—TOO HECTIC TO BE ANYTHING
ELSE—AN EXCESSIVE FIELD—HERETICAL
WORK COMPLETE—NOT SO MUCH THE NOVEL AS
THE LITANY OF BOOKS HEAPED UPON EACH—THE
COHERENT CRADLE GREATLY EXTENDED—
THE BOOK OF NEGATIVES IN ACERBIC
RADIANCE—WHAT BEGAN AS A NOVEL
AND REMAINED—WHAT CONCLUDED A LYRIC
AND RETURNED, DEAD-ON, TO THE TRAGIC NIGHT.

Rivera explores and explodes the possibility of the book as artifact, shaking it loose from its binding while imagining diverse enumerations: the book written in dust, the book as a litany of books heaped on each other, or the book as ‘negatives in acerbic radiance.’ The Drunkards, furthermore, sustains a meditative engagement with potentiality, imagining the blank, gap, or void as a carrier and articulation of meaning. In “Epilogue: The Book of Devotional Cinema and Repetition in the Blank,” Rivera presents a poetic and fragmented dialogue between two troubadours, wherein he addresses the space of the pause as essentially subversive:

–To one who governs the pauses.

The space of the pause and the gaps in communication are radiant containers for subversive potentialities and the possibility of imagining things otherwise. This brings us back to the Marat-esque images positioned at the beginning of the book—Rivera posits the necessity, in the spirit of such revolutionary figures as Marat, for art and literature to imagine things otherwise in the face of political oppression. Rivera implicitly asks readers to never stop celebrating life and living in the midst of tyranny, and to uphold the necessity of change and transformation. Perhaps this is the secret of drunkenness—a state in which seemingly anything can happen. In the touchstone words of Baudelaire:

You have to be always drunk. That’s all there is to it—it’s the only
way. So as not to feel the horrible burden of time that breaks your
back and bends you to the earth, you have to be continually
drunk.

But on what? Wine, poetry or virtue, as you wish. But be drunk.*

*From Modern Poets of France: A Bilingual Anthology, translated and edited by Louis Simpson, published by Story Line Press, Inc.