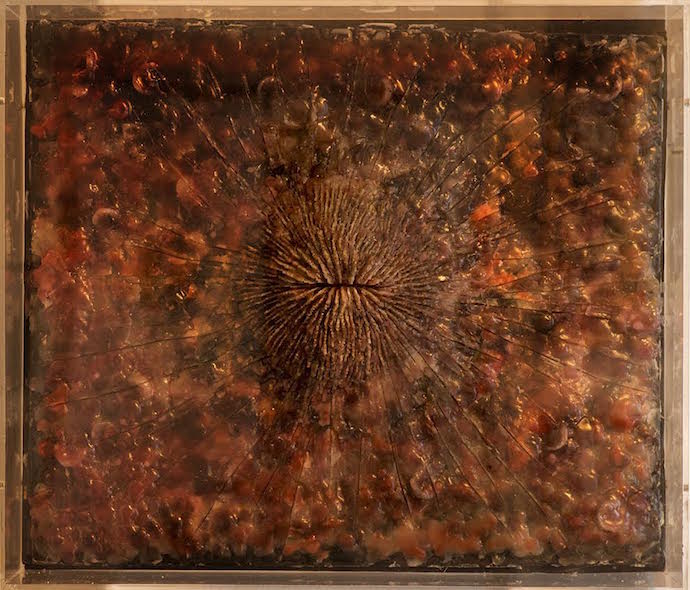 Organ1 by the author

When she quarrels with him on the phone, a third person appears. The third person is neutral, having neither gender nor position. But s/he is attentive, as though invested in the stakes of the argument. The third person fades in and out of consciousness as, between her and him, motivations are questioned, misunderstandings doubted, the future threatened. In these intervals, she finds that the third figure—like moments of smoothness during plane turbulence—comes as a tender passerby, a compassionate coincidence.

Before falling asleep, she’s bombarded by vivid hallucinations of the most beautiful shoes she’s ever seen. She wishes that, say, in this paragraph, she could put to use her penchant for detail by describing their intricacies, with all those fantastic tassels that language puts at her disposal: laces for S’s, buckles for E’s, and boots shaped of L’s. But imbuing those visions with so much detail would be dishonest. For almost as soon as they bombard her, they fade into oblivion—a potential career in shoe design escaping like a wild wagging tail. Perhaps the fondness for shoes emerges from a previous life. Certainly not from this one—she has never been one to overflow her shoe racks. Though she might add that, these days, she has found herself scouring the Internet for platform sandals. One particular model, black and retro, remains sold-out in her size. She refreshes the page again and again, hopeful of a shift in her eyes.

She is lying in bed with him when—a scream—she straightens abruptly.

She has heard that, in some cultures, people consider themselves porous. The Inuits up north, unsurprised by passing ancestral voice.

I also sometimes have, he begins.

But lying back down, she stays terrified of the ceiling.

I thought I was lending you my body when I lent you my apartment. In addition to telling you which button to hit if the smoke alarm went off while you were cooking and which living room window to open (only one has a screen), I found myself on the verge of adding that, if you couldn’t fall asleep, it was perhaps because you hadn’t eaten enough and should serve yourself some Ryvita’s with cheese and that, should you undergo a surge of affection for the kitten, to not restrain yourself from plucking her up and kissing her smack on the leathery lips—I was going to tell you these things. But then I remembered you’ll be inhabiting my home, not my body. And more than that, that even if you were to body-sit, I would have trouble guiding you through any more pointers than I have until here.

I remember the time my young cousin told me his father, my uncle, took him to a dinner striptease, and his father stuffed a bill into a stripper’s butt while she danced on the table amid soiled plates and chattering cutlery. The story may well have been a fantasy concocted by a child subjected to too much television and Internet—that, and the divorce which had, since he was an infant, been perforating the family. My uncle and his wife didn’t speak despite living together in a five-story mansion, enlisting the go-between of a Russian, then a Filipina, then a Polish nanny. While the wife went on shopping binges, my uncle smiled sedately. So their son’s telling me about the stripper could have been his way of acting out against a sub-ideal family.

When my cousin told me his version, though, whether what he said was true or fabricated wasn’t my prime concern. The issue was, he had already engraved the image into my mind. Of my uncle, lewd and destructing. The image remained with me in later years as I considered his once-dapper, now thickset British identity. The possibility had become actual. Because the question of whether it was true or not still lingered, but also because my uncle, in his sad, merry-glazed estrangement from (as far as I knew) all women, exuded longing. Rather than lie, my cousin seemed to have tapped into his hurt. And whether the disturbed innocence was the instigator or product of what he’d said seemed much the same thing.

Yasmine Lucas is a writer and visual artist currently living in her hometown, Montreal. Her fiction has appeared in Barnstorm, Metatron, Bard Papers, and The Claremont Review, and received an honorable mention in the 2007 Rrofihe Trophy short story competition. She holds a BA in Written Arts from Bard College.