Walking through the New Museum’s comprehensive retrospective on Carol Rama’s life and work feels a bit like wandering through a diary: Rama’s life collapses and expands and writhes through her early paintings, her bricolages, her sculptures.

Peppered throughout the exhibit are quotes from Rama, some which are as powerful as the artwork itself. Case in point: Her exploration of the mouth in both her art and her writing.

“The mouth has always made me work…there has always been a mouth, whether it was a tongue or a sneer, it doesn’t matter, but it was a wish, a dream, a chance…the tongue, being an organ which does not age, makes you more confident.” 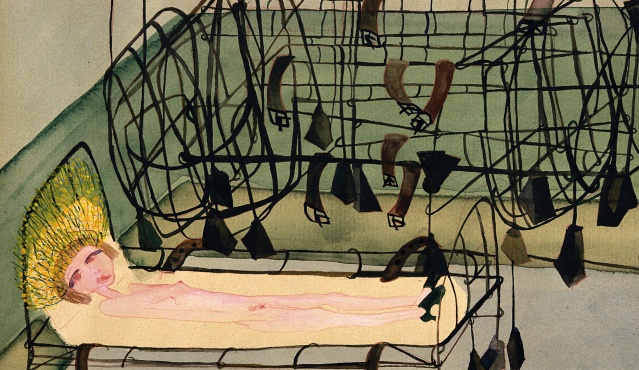 “…I didn’t understand I was in a madhouse environment and the freedom I found in these people with their tongues sticking out, their legs apart or crouching down…I saw these women, squatting on the ground, with their legs spread, their asses in the air, and I believed the entire world looked like this, no? That helped me a lot.”

Following the suicide of her father, Rama fell deeper into her art as a means of escape. Another obsession of hers: Teeth, particularly false ones, which appear over and over again in her early works. The influence? Being surrounded by her aunt’s false teeth, which lay around the house.

“I preferred my aunt’s false teeth to any flower. I hate flowers, really hate them, perhaps because they are more beautiful than my paintings, than me. It’s mainly anger inside me.”

As Rama matures, so does the work. Rooms evolve from her drawings to bricolages, paintings covered in eyes that stare back at you, daring you in multiple. Her work extends to a single bronze shoe with a genitalia-like point at the toe, and dresses with embroidered organs on them. The dresses, black material pierced with red cloth, are deceptively simple until your eye lands on the title: Wedding Dress.

In each and every piece, no matter which era, there is the body: Parts of fingernails, hair, eyeballs. She leverages diagrams, rubber tires, shoes, appendages. 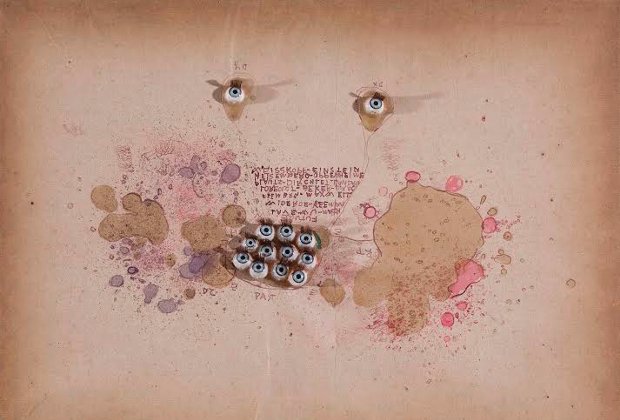 “I seek to improve the body, and give joy and meaning also to those that are deformed. In debased, diseased bodies, I was looking for a spark, a flash of vitality, a desire, even obscene, to exist. Are you living in hell? Well, try to make the most of it, even there.”

To make the most of hell — and to do it well — puts Rama on par with Louise Bourgeois. Both were discovered too late, and both spin up strange, weird worlds. 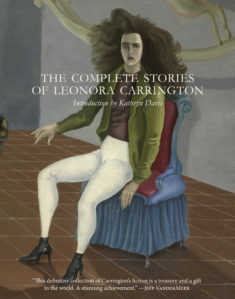 I like my surrealism sparse, and the minute I cracked open The Complete Stories of Leonora Carrington, I knew I was in the right hands.

Carrington, born in England but moving around much of her life before settling in Mexico, is more widely known as one of the leading females of the surrealist art movement. Her paintings display a strange alchemy, channeling an occult that lures you in and doesn’t offer any easy answers.

Her stories are similar — sharp, biting tales that span only a few pages but leave you guessing at the end. A young girl dresses up a hyena to take her place at the debutante ball, and it ends as violently as you might imagine. A rocking horse that might be alive becomes a feminist stand-in for a girl who is reared by her father. A woman makes love to a boar and bears his children right before he’s murdered for a priest’s feast.

Each story contains some level of decadence (brocade, religion, royalty) and some level of violence (birthing, burning, attacks) leaving the reader in a strange, beautiful balance.

The crux of these stories, however, is Carrington’s ability to create a final sentence that clenches, that stays in the brain like an echo. Carrington doesn’t over-explain her scenes, she lets the weirdness live on its own through stark sentences that don’t give the reader too much to cling to. The result is a special brand of Carrington surrealism that leaves you hanging in a strange mist much like her paintings.

A woman trapped beneath piles of black rubber coils, screams her anguish to the sky, then slams her body to the ground. A man smeared in brown liquid marries a woman smeared in blood in front of a Dunkin Donuts. Eight women in Levis and white t-shirts strum identical guitars while completing an epic ballet. A black creature made of coils allows six bright pink balloons to expand and then deflate from the caverns of its form. 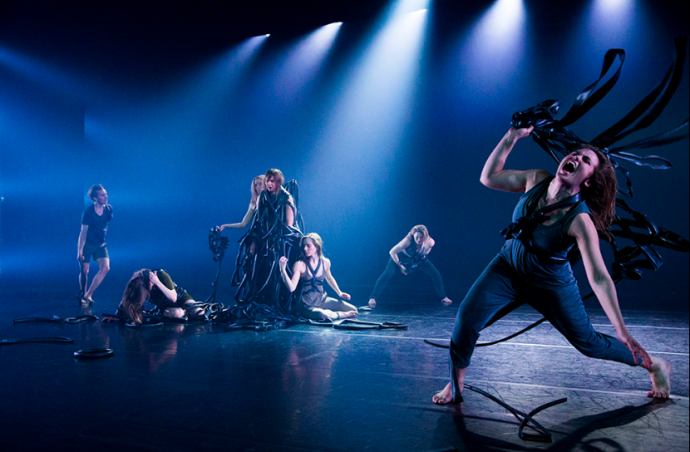 The show was a collaboration by Erna Ómarsdóttir, Gabríela Friðriksdóttir, Ragnar Kjartansson, Margrét Bjarnadóttir, Bryce Dessner, and Matthew Barney. The result: A five-hour mind-bending presentation interweaving dance, film, and song on Sunday, April 9th, the last run of the show in Reykjavik.

The stage performance choreographed by Erna Ómarsdóttir was gut wrenching. The performers wore simple costumes with rubber coils wrapped around their bodies. The coils became a running theme, a stand-in for the weight of life. Throughout, the performers found themselves pulling against the rubber, wrapped in it, bound together, or happily dancing with the coils. In the climax, a single woman at the center of the stage had the coils heaped upon her head as she screamed in anguish. Eventually, she was consumed by the coils, a harrowing image – until small pink balloons inflated from her form, then were released as confetti cannons shot in the direction of the audience. 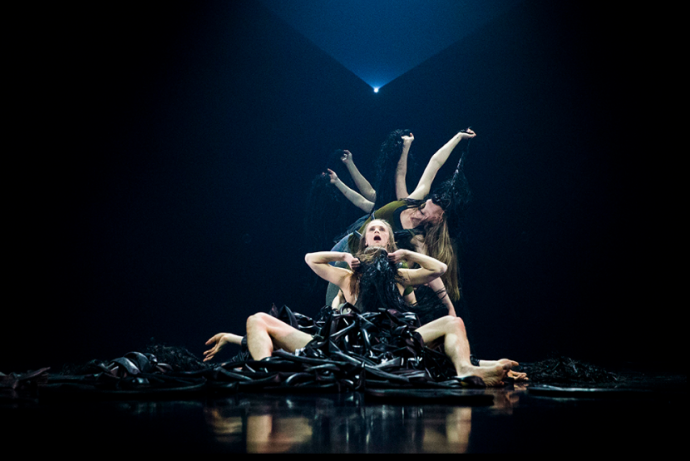 Eight women dressed in Levi’s jeans and simple white shirts strummed acoustic guitars in the bright lights. Part ballet, part rock concert, the simplicity of this required a heavy amount of technique from the performers, who didn’t miss a note or a step. It felt like a replication of Americana, both familiar and distant. 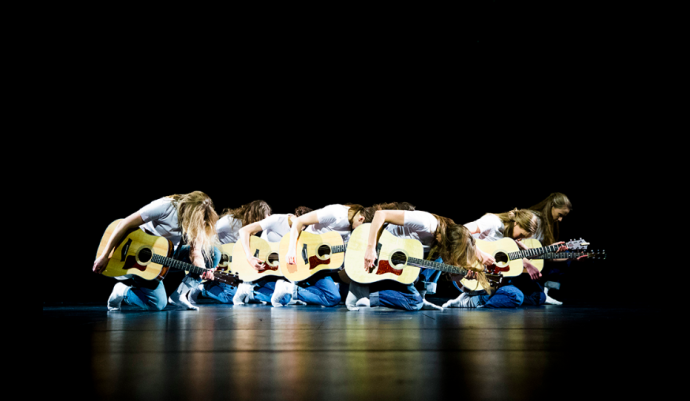 A two-hour long movie set in a mall. The major players: A man in a grocery store break room and a woman in an athletic clothing store break room are both being prepared for a ritualistic marriage ceremony at a Dunkin Donuts. 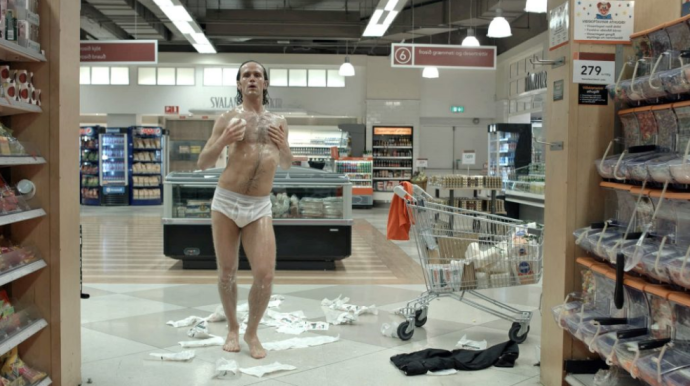 Here, there is no language used – the entire movie is based on body language, performance, and grunting. Men slather themselves in butter, women stripped down are coated in blood, there is an animalistic feeling in a capitalist setting that works well to make the viewer feel uncomfortable, riveted, climaxing in a marriage in an inflatable dome in front of a Dunkin Donuts that won’t soon be forgotten.

Fórn was an all-encompassing night, each performance demanded something of the viewer. This wasn’t passive art – it was art meant to make you engage with suffering, with capitalism, with ritual sacrifice, with the body. It was raw, beautiful, bloody, cruel — it felt honest, and full of risk. No one had their phones out. Instead, we sank into the world Fórn created and we stayed there. I left drained and electrified, with a brain that felt like it had been bleached.