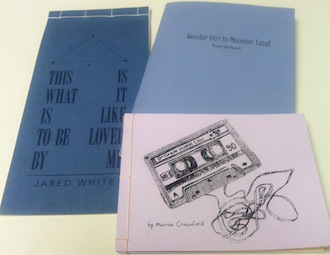 Comprised of sixteen prose blocks, Marisa Crawford’s 8th Grade Hippie Chic captures the jumble of early-to-mid-90s, suburban adolescence––from daisy-covered dresses, to Grateful Dead tees and dreadlocks, to fuzzy chain wallets and hair dye. From first-person perspective, the speaker of the poem reflects back on this period of her life. In her speaker, Crawford masterfully portrays a sort of earnestness that seems funny to older ears, the kind of earnestness that only comes from the self-seriousness of youth, such as when the speaker proclaims, “I am inspired by the hippie movement. The women at Haight and Ashbury with flowers in their hair and psychedelic swirls in their eyes and in their hearts. I am inspired by them.” And later, “When I think about them, I want to wear enormous feather earrings, but only if the feathers were found lying in the dirt like a gift from the animal kingdom and from the earth and from the spinning, dizzying heaven.”

The prose is spare and delivered in straight-forward language, and the brief descriptions are sharp and insightful, as Crawford is able to capture relationships in brief details, such as when the speaker plays The Nixons’ “Sister” on repeat and her mother thinks it’s because she’s sad that her sister is going away to college, but the speaker deadpans, “[T]hat had never really occurred to me.”

Though this poem will speak to many who came of age in the nineties, 8th Grade Hippie Chic should appeal to a broader range of people because of its humor and intelligence, and ultimately it captures something most people can relate to––that search for an identity and independence. It’s a story of friendship and the time in one’s life where he or she is still trying figure things out––trying to find an identity that is separate from his or her family and establishing his or herself as an individual in those ways that are not unique––smoking pot, dyeing hair––but that feel like it at the time, how small acts of rebellion seem like more than they are. Crawford writes, “Could have sworn I knew revolution. We smoked cigarettes on the swingset in your backyard.”

This Is What It Is Like To Be Loved By Me by Jared White, Bloof Books

The sections are imaginative in their twists, and there is a lyric sensibility to the sentences that makes this poem a pleasure to read in its entirety out loud. For example, White writes:

an actual book. My poem my novel is one sentence long

I hope I hope

and I am surrounded by evidence

and I am an evidence maker

I could read the words in my mouth because the words have words written on them each word inscribed with the the word it is and each mouth tattooed mouth color with the word mouth in the language the mouth speaks, not mouth as it might be celestial and expensive but affordable mouth, adequate and obvious and constantly available. Happy character, mouthing ablutions of words read and knowing how unlonely it is to be the same in Philadelphia as in New York.

Further, it is a far-reaching, tender, and thoughtful poem that employs humor and also can be enigmatic at times, which ultimately comes across as a deeply human poem. With its casual tone, quiet intelligence, and sincerity, it is reminiscent of New York School poetry, especially that of Frank O’Hara and Ted Berrigan. Fluctuating between subtlety and exuberance, This Is What It Is Like To Be Loved By Me is a poem that will stay with the reader long past its end and would be well-worth revisiting.

Brenda Sieczkowski’s Wonder Girl in Monster Land is a series of poems centered around a girl named Yomi, whose name is Japanese for “land of the dead.” The character-driven series fits in well alongside other recent character-driven works, such as CA Conrad’s The Book of Frank and Danielle Pafunda’s “Mommy V” from her book Manhater. And like Conrad’s and Pafunda’s works, Sieczkowski’s has a dark edge, and there is also playfulness and humor too.

Yomi has a taste for the grotesque, but only if it is endearingly so. When she babysits for the neighbor kids, Remeron and Cymbalta (named after vintage anti-depressants), they watch the Friday night Creature Feature featuring Matango (Attack of the Mushroom People). She plants rock gardens, recreates diseases from the website “America’s Most Famous Diseases,” makes mixtapes featuring songs like “My Baby’s All Opposable Thumbs or (Please Hammer Don’t Hurt Him)” and “Ooh Baby, I Want You (To Scratch My Phantom Limb),” and hangs out with a bear that loves potato chips: “He crunches through the dark and sucks salt from his paws and then, most nights, begins licking restlessly at the raw stump where he chewed his left leg from the trap.”

Many of the poems are in prose, but they’re broken up by a number of “little songs,” which are each rhymed pieces consisting of two sestets. This adds to the collection’s playfulness, creating a children’s book-like quality. There are also visual pieces–concrete poems, one poem whose second stanza is shaped like a mushroom, and another poem that takes the shape of a hot air balloon. There are also illustrations depicting moments from the poems, and the book closes with “10 Amendments (An Erratum),” which advises, “Where text says song, read ghost. * Where text reads ghost, see further.” While there is certainly something sinister belying Wonder Girl in Monster Land, reading it is wicked good fun.