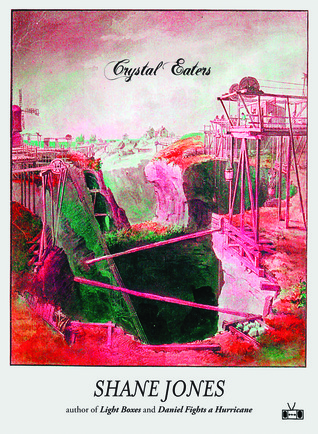 Whenever I think of Shane Jones I imagine he is an old man, but not a normal old man. More like a thirty-something-year-old person whose brain has been alive for eighty-something years.

Early in Crystal Eaters, the family dog dies and the dad is like, “Hey, I made dinner.”

Shane Jones has 27 bones in his hand.

Another dilemma in the book is that one of the characters notices a dead dog smell everywhere after her dog died.

I imagine Shane Jones sometimes goes into a gender neutral bathroom and cries. Whether or not he does, I’d like to point out that he seems to be good at gathering and reorganizing his own tears until all the tears he once cried are turned into a book that is good at making tears in its readers.

Did you know that it is against the law to not wear red shorts with white trim while mourning your dead dog?

I wonder if there is a universe where children never have to leave their parent’s womb and pregnancy is a permanent and infinite decision.

FYI: Ants only have three crystals, but pinecones have seven crystals.

For most writers, logic is a restraint that’s always telling them what they can and can’t do. Shane Jones ignores most logic and instead invents his own.

I’m at Whole Foods right now. I just finished reading Crystals Eaters. At a nearby table, a guy wearing a racist sports hat is feeding his baby pizza.

Whenever Shane Jones sends an email, I imagine he whispers to himself, “Magic, must be magic.”

It’s very sad that Shane Jones has to work in an office instead of growing his hair twenty feet long and living in a tunnel.

Sometimes it’s difficult to separate a writer’s metaphors from your own reality.

If you can, just let Shane Jones’s crystals be crystals.

Shane Jones probably feels most unlike a human at night when he is lowering his pants and listening to the bugs.

If humanity is ever going to survive we need to remember the guy in jail with a ponytail who shaved the top of his head. This guy does pushups every night and makes spit shapes that resemble his mother’s shape.

And, it’s usually probably not safe for men to not process their feelings.

Life tip: If you have to go to jail, grow your hair long and bring a duffel bag full of crystals with you.

True story: the last time Shane Jones got a C minus on a test his parents bought him a new dog.

Some people think crystals aren’t real and were made up by people with sad brains, but people who think this also probably look at their cell phone while walking and trip over things.

Unfortunately, if your mom is sick and she is always thinking about horses after she vomits then she might always be sick.

Mathematical theorem: If your mom can die she is not a horse made of crystals.

Did you know that all the jean jackets owned by dads are stuffed with yellow crystals because dads believe the value of yellow will rise until it’s equal to red, but no one believes the dads.

True story part two: Shane Jones used to have a blog devoted to prison gossip but now he works in a cubicle.

When Shane Jones was in prison he threw his teeth at the guards until eventually the prison melted.

Maybe the saddest realization I had while reading Crystal Eaters was that there might be prisons on the sun and all the inmates in these prisons can’t sleep and will eventually go insane. Sleep deprivation is a very real and scary issue that most people ignore. If you have sleep deprivation it probably means that you are partially insane.

I laughed at this line: “I’m not really talking, says Dog Man, I eat my own shit.”

There was another line that made me laugh so hard I forgot I’ve ever been lonely, but I’m not going to tell you this line because it was my own subjective experience and you might not have the same reaction. You should still read Crystal Eaters though because maybe you’ll find the line or maybe you’ll find a different line that helps you forget you’ve ever been lonely.

Parenting tip: Don’t call your son “Tiny man” if you don’t want him to go to jail.

Some people are always like, “Your problem is that you believe in rocks instead of god.” But rocks exist. They let you touch them. God never lets you touch him. The best way to touch god is to smooch your cross at least 666 times a day and then maybe you’ll probably never have to live again without dying.