THIS HEAVY BEAUTY: A REVIEW OF LISA RUSS SPAAR’S OREXIA 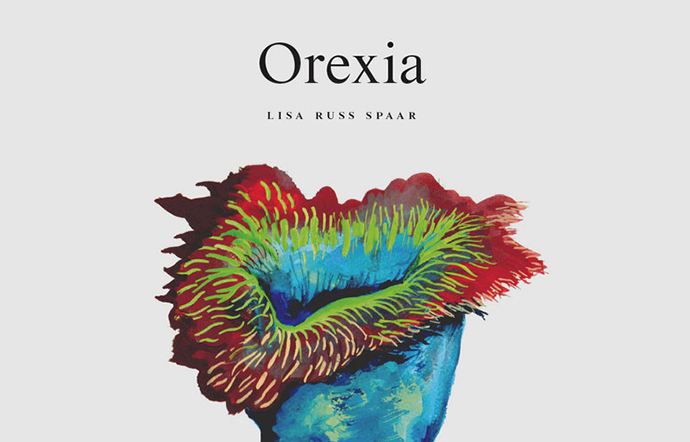 “Language is our medium;” said Lisa Russ Spaar during an interview in October 2016, “more than anything else, perhaps, our ability to use it, for beauty or ill, defines our humanity.” Prophetic words, perhaps, as since her latest collection of poetry, Orexia, released this February, language—and its use for beauty or ill—has increasingly become the subject of public discourse.

If our degree of humanity is determined by our distinctly human capacity for using language, as Spaar suggests, it is interesting, then, that Spaar’s latest takes its title from the Greek and means a specifically appetitive desire, that force that drives our basic survival and moves all animals. The division between our human capacities and our animal bodies has long been the subject of philosophy and literature, and how this tension is mediated—by religion, culture, custom—has been long debated. At the very outset of this collection of poems, her fifth, Spaar takes up this dichotomy and displays the tension between the instinctual and the ethical in a kind of sleight-of-hand grace.

Orexia begins with an object imbued with meaning: a wishbone, a natural object that becomes for us an embodied relic of superstition and hope. And immediately, Spaar accounts for the object’s history: how it once belonged to a living thing.

Never to belong again to wings
that lifted, to heart,
to blood’s forsaking bodice …

It is only through telling that Spaar can reveal the significance of what otherwise might be a piece of trash, swallowed up in a compost pile. As with this object, Spaar similarly reveals the truth and history of words themselves. Her very title demonstrates this, by stripping a word root of its associations. The meaning of the word “orexia” is most familiar to us when it is determined by the syllable that comes before it: “anorexia,” combines the prefix “an-,” meaning “without,” with the word for appetitive desire. But we hardly ever see orexia on its own. The underdog word that works as Spaar’s title, often overlooked in the diagnostic realm of praxis where the meanings of words are taken for granted, suddenly comes into its own being. We can see a new meaning, exactly the opposite of how we’re accustomed to associate it: the presence of appetite rather than its lack. Through this single word, used as Spaar uses it, we are brought into the realm of thinking about language.

Just as appendages alter the bodies of word roots and their meanings, so too are we human animals altered by this thing that we have attached to ourselves: language. We can begin to see this in Spaar’s poem, “Accidental,” which begins:

coiled beehive in gauzy umlaut of wings,
gilding pale as the heat the vagina gives off,

after—. After what? An afterthought, now,
to change “vagina,” for modesty’s sake,

to “portal to this world.” Truth is, the key
signature of any day’s measure can be altered

all of a wild sudden. How a deleted “i”
turns another word to “marred,” for instance.

A clock transforms to a castle, to a beehive, to a vagina so swiftly here, one can hardly catch one’s breath. Then we encounter a doubled consciousness aware of the act of this writing, riddled with accidents. Spaar invites us into her process, her thinking about the bodies of words, so easily marred by a keystroke, or lack thereof. We also see a moment in which Spaar reveals how our shame or embarrassment changes how we tell our own stories. In such moments in Orexia, a postmodern stripping away of the tricks of art (to catch ourselves in the act of thinking) lives easily alongside the exquisite texture and imagery of the Baroque.

The same poem ends in a moment of revealing, showing how our selves are slippages of one another in a tangle of personal pronouns, each one of which is subjective, shifting the self represented:

whatever happens or doesn’t happen,
the portal happened once. To make you,

you who were an I. To make me,
the child you were. You what I will be.

Readers of Spaar’s work might be tempted to focus on its dazzlingly linguistic, erotic, mythic, and religious qualities. But I want to say that undergirding these themes is an ever-increasingly honed argument about what it is to be human in this world. This is why what Spaar says about the relationship between language and our humanity is so revealing. One might be tempted to say that Orexia is about aging. It is, but I want to say that even more potent and universal here is the meaning and feeling of running against time, carrying with us a consistent orexia for life, a desire that never dies, even as our bodies and the world around us crumble.

Similar to the slippage of language that occurs in “Accidental,” in “Orexic Hour,” Spaar writes:

My body, made to be entered
& exited. Almost wrote “edited.”

Eaten. Odd to be so direct.

These fascinating, doubly aware moments have the feeling of being wholly new for Spaar while also being a natural outgrowth of her earlier work. This has deep significance. Spaar courageously strips away some of the linguistic density that has become her signature to question language’s accidents. In doing so the poems open up new questions about poetry’s social place and functions, as well as the essential constitutive phenomenon of poetry: speaking and being heard. So now when we read the thickly linguistic lines Spaar has become known for, we begin to understand that this is not merely a dazzling “poetic” move. It is rather an investment in our ability to use language, in our humanity.

In a sense, then, Spaar’s speaker is an uncommon sort of idealist. Rather than investing in a worship of the perfect forms—of which the shapes of the world are mere shadows—language is the thing that can be idealized, doubted and believed. Language is the medium through which, by practice and struggle, we can better ourselves. I believe that this becomes language’s role, for Spaar, precisely because she knows the world outside language cannot truly progress. The world outside language is naturally indifferent to us, riddled with accident and contingency. This is the inherent structure in which we struggle to survive, a struggle we share with all other living things.

Who cares that the maples blistered

with renewal today, at last,
despite shackles of snow,

not for me, not for you,
obeying an instinct akin to human,

In Satin Cash, released in 2008, Spaar wrote: “What do I believe?” The directness of that question has stayed with me for eight years.

Despite the appearance of religious diction and a sequence of “temple” poems scattered along the path of this book, Spaar’s belief in language’s power to better humanity needs no divinity for justification; a belief in God is a moot question. I want to say that Spaar, through a struggle, has finally arrived at an answer to her own question from eight years ago. I believe that she believes the world is the word and the word’s body is our body; when we expand the words, we expand ourselves. When—through misuse or using them thoughtlessly—we break the word, we break ourselves.

Thus, Spaar is invested in truth-telling, but through stripping language of its common colloquial associations, its unthoughtful dispatches. This is the opposite of propaganda, wherein the words remain enshrouded in so many associations and interpretations that they can have persuasive, and yet, indeterminate meanings. Further, Spaar’s poetry shows that to think of the appetite on one side and our language capacity on the other is a false dichotomy. Our particular human hunger is for survival and for meaning at once, for survival through the meaning that words give our world. We are beings who are hungry for meaning and this is precisely makes language used for ill so dangerous. It is also how language, when used for beauty, can lend us back our lives.

Spaar is a poet, but she is also an anthologist, critic and teacher. She was my teacher, once. She believes, I believe, in insatiable curiosity. She believes, I believe, that our capacity to learn is perhaps the only sacred thing we can possess. I believe that Spaar loves the world, even in spite of, or perhaps because of its lacks and sufferings, its inaccuracies, untruths and even lies. “The limits of my language,” Wittgenstein famously asserted, “are the limits of my world” (“Die Grenzen meiner Sprache bedeuten die Grenzen meiner Welt”), and that old adage comes to mind here. Spaar manages to expand the limits of her own world precisely through using language so expertly—and, in her myriad capacities, she tries to expand the limits of ours.

Because of her acute awareness of the meaningless, the skeptical, the despairing, as well as the power and humanity of language, Spaar is well equipped for destitute times; she can help guide us through them.

To keep from freezing
even a priest might commit
the Virgin’s statue to the flames.

This image, offered to us in the very first poem of Orexia, teaches us a lesson: Even a holy man will burn a holy thing out of destitution. One can imagine that the statue, as it is consumed, reveals itself as what it was all along—as if the inverse of the wishbone—a mere object. We are left to draw our own conclusions about the logic of this decision: that the priest values his life more than God’s; that, because the priest survives, so does his faith in God; faith is carried in the body. Without any believers, God cannot exist. One must burn the sacred material thing to preserve the sacred immaterial thing.

“We will always have this,” Spaar once told me, during one of my own struggles, placing her palm on a stack of drafts piled on her office desk. That moment has stayed with me for a decade.

Near the end of the book, we find ourselves on the eve of a new year, that arbitrary liminal moment between the end and the beginning—we are listening to a song:

Two sisters side by side,
benched at the gleaming fin

Meanwhile, we are told, outside are the “sinew-tracks of moles/ sponging December’s yard,// painted mouths of iced puddles,/ branchless leaves snaring the window// with inhuman gale.”

We see the human world of art and the inhuman world finally mirror one another: the mouths of the singing girls reflect the mouths of iced puddles, the inner space of the living room and the yardscape strike a kind of harmony. Into this scenario, Spaar then injects a truth of the feeling about this moment, teaching us what’s at the heart of it, even as the moment is fleeting. The hunger for life is there, as is the hunger for beauty—indeed, our human words are even being sung. And we can finally be at home:

One swallows this heavy beauty,

of autumn’s whalebone stave, descant.
They sing as if still girls. As if before

love’s scarlet evidence, & not, like the year,
the trees, already moved, moved through.