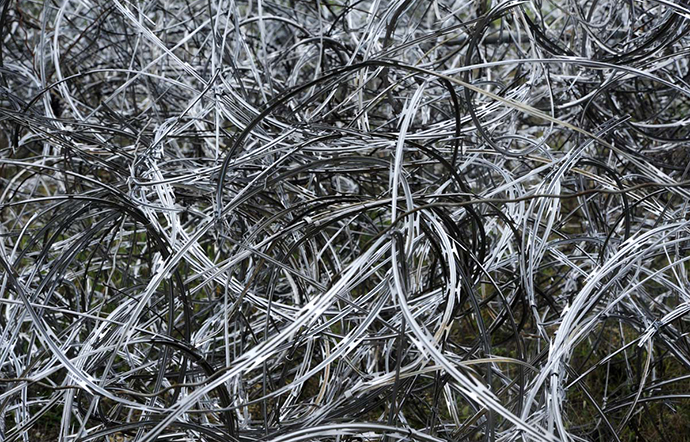 The sky. It being solid and grey and quiet, how it stays in the North. Pulling up to the prison’s entrance and I had a feeling that I had seen this particular slope in a dream, this sign, these colors. The complex sat atop a treeless hill, one small intake building with enormous mirror-polished doors and the other buildings set back from there, in neat lawns and sidewalks and activity fields. We walked up to the black mirror doors, watching ourselves approach, watching our watching silently.

My boyfriend and I got there at the beginning of visiting hours. Everyone else knew how to do this complicated process, for which there were no instructions, and were happy enough to tell me it as I stupidly cut in line. Forms and ID were presented, a debit card for the vending machines inside, and everything we brought was stored in a locker. Our names were called, hands stamped with something invisible, and we passed through a metal detector, joining a clump of visitors now on the far end of the building. We waited again, inspecting the photos on the wall of previous wardens and other prison officials, sort of joking about their names quietly, attentive and antsy. A man’s arm poked through a small door and we presented our hands to a purple light it held that made the invisible stamp glow, then we lined up at the exit door.

Waiting at the exit, I stood next to a window where the razor cyclone wire border was cut away, the razors actually sharp on the wire, silly billows of it, clean and perfectly silver. Approaching the next building, there was a gate to the yard where men in khaki are milling around on pathways. On the way out there were starlings perched in the razor wire, squeaking cheerily.

It was cold in the visiting room and we waited for him to come out. A tall square cinderblock room with bolted-down rows of molded chairs, a large blue wrestling mat for children to play on, an alcove of vending machines, and a raised station of guards—it was clean and noisy and full and bright. I was nervous, at all points of this approach, but especially now. I felt myself resisting. When we left the hotel I did not want to drive to the prison. When we arrived at the prison I did not want to go in. When we were sitting waiting for him to come in I silently prayed that he would not come in.

But he did, and was shorter than I remember, with all white hair and deep wrinkles. I did not recognize him at first. I stood to approach him and he raised his palm to me and motioned to sit down while he went to the desk to check in with the guards. He hugged me hard when he came over and kissed my cheek. I could tell he was honestly happy to see us both.

Here I was, visiting my dad in prison again, just like I did when I was 15, now more than twice as old. What was I looking for? What was I really expecting from him?

Most of what we talked about during the visit was food. Him not being allowed to go to the vending machines, he had to tell us what he wanted and we would go purchase it from the machines with a prepaid debit card we bought in the intake lobby. He wanted pizza, and then when he finished the pizza he wanted another pizza. I felt terrible that he’d be the only one eating so I bought a chicken sandwich just to eat with him. It came in a paper tray and was just foamy chicken on bread that after microwaving in the bag was wet and sort of warm but still frozen in the middle. I ate half of it and when I put it down he ate the rest of it. He asked for a Dr. Pepper and Funyuns but they did not have Funyuns. I bought him jalapeño cheese curls instead, figuring those were the closest in texture to the Funyuns but he did not much like them, and during talking he took a napkin to one curl and tried to wipe off the bright green particles that were making the curls spicy. The next curl he seemed too embarrassed to use the napkin again so he shyly scraped the curl against the edge of the bag to try to remove the flavor dust and I sort of watched him to that too, and hoped it worked, and felt it probably didn’t. He talked about what kind of food he has for dinner and what is available in the commissary store. He said he buys ice cream once a week and sometimes tortilla wraps and tuna he will fix himself if he doesn’t like the dinner offered. The bandit chewed his snacks. He spoke calmly.

The parts of prison he seemed most pleased with were the activities and freedoms he enjoyed in minimum, boasting how there were two softball fields here instead of just one at the last place. At times he seemed downright happy in his demeanor about prison life, and it really didn’t seem like an act. It’s sort of easy there, with its stability, isolation from real-world problems, and the petty freedoms. Most of all the petty freedoms. His choices are limited obviously, this seems to be in fact the philosophy behind incarceration, but not so limited that he feels he has no choices. He can apply for different jobs (his current job was rolling silverware into a napkin from 10am to 1pm M through F, for which he is paid 12 cents an hour), play softball or basketball or bocce ball, email or write to family, talk on the phone, read, sit by the bocce ball courts and eat ice cream.

He explained how there were three different TV rooms—“one for whites, one for blacks, and one for Mexicans.” It was not segregation, he insisted, just practical—it prevented arguments over what stations to watch. In the room with mostly whites he watched the Discovery Channel, AMC, baseball when it was on, football of course. The dream of peaceful segregation that never worked in Detroit now come to life, in prison.

He was taking a World Geography class on Saturdays, although he told me he would have preferred the Home Wiring or Real Estate classes, but they were full. He can apply for other prisons if he wants. In fact he is applying to be moved to Milan, Michigan because they have some “religious program” there he described that if he can complete, will knock a year off of his sentence. “There’s also a drug one,” he said, “but I don’t qualify for that.” It didn’t matter; it was just a way to cut a corner.

He seemed like a gentle old man. He talked about his brothers and sister and asked me about family members who don’t want to talk to him anymore, like my sister. I tried to stay vague, how she would want. She’d told me never to talk about her to him, and I respected that. She didn’t want him to know where she lived now, or where she worked. I saw a hardened hurt in his eyes, even during the soft talk and smiling and casual jokes, a steady hardness. There was a pointed anger. Maybe it was shame. Or maybe just cultivated for his surroundings. Maybe it was not there at all and I just was looking for it.

Visiting hours were until 9pm and I could tell the other visitors were settling in for the entire stay—staking small seating areas, loading up on food and drinks, setting out toys and books with their children. Most of the young children seemed happy and excited, some running up to the inmate as soon as he appeared in the room, many spread out on foam mats with their dads, toys everywhere, pleasant and good. Older kids, though, seemed the worst. One chubby preteen Mexican boy was crying, arms folded across his chest protectively, while his inmate-dad talked close to his face intensely. Some girlfriends or wives seemed unhappy. I probably seemed a little unhappy, or nervous, squeezing my hands together and hunching forward in my chair. I tried very hard, though, to not seem unhappy.

Dad sat with his arm wide across the chair next to him, leaning back, not unhappy. Tranquil with us, as if we were visiting him at his private summer home.

Dad had purchased three photos in anticipation of our visit. We walked over to an inmate sitting at a table with a nice Nikon camera and a clipboard. “One of you guys, one of me and Molly, and one of Molly by herself,” he said, having clearly planned this out in advance. My boyfriend and I stood with our backs to a solid blue backdrop painted on the cinderblock wall. I smiled. Dad stood by the cameraman and smiled. He switched with my boyfriend and put his arm around me and I remembered how short he was. I smiled. He left me and I stood against the wall alone, feeling the space around me, the weird look of the cameraman on me, and my boyfriend and Dad smiling at me, and I tried to smile best of all. The inmate turned the camera around to show me the pictures. They were heartbreaking. I looked scared and small and too old to be anybody’s daughter. I smiled. “Cool, they look great,” I said.

It had been almost two hours and I felt like there was nothing much left to say. I hadn’t broached any real or remotely important topic, despite how much I wanted to ask him about the robberies. I told him we should be getting back soon. He seemed robotic in his reaction to this, switching away from us quickly, without hesitation or longing for us to stay. I looked at him a little more steadily now that we were leaving. He looked blank.

He hugged us and patted our backs and turned to go without looking back, how I also tend to leave. I hate to look back because it makes me sad to see departing too closely, but his reason seemed different. The small upbeat man with the comically huge ring of keys who lead us in now lead us out. It seemed like we were the first visitors to leave. Outside it was still grey and solid in the sky with clouds. He showed us a deck of ID cards and sorted through them slowly so we could pick ourselves out.

When I had visited my dad in prison as a 15 year-old he had seemed stronger and more confident. And that act was still in place, but below it I sensed a frailty that made me feel sorry for him. I thought about St. Albertus, the church where his small family was sheltered as refugees after liberation from a Nazi concentration camp, now ruined, and I felt sorry for him. Maybe it was just that I was older and couldn’t be fooled so well—maybe the frailty had been there all along but I didn’t recognize it.

I had pictured myself crying after this. I thought of how happy I would be to have my boyfriend there, someone to finally see and understand this strangeness. I didn’t cry. We walked out of the prison into the dull evening and I felt neutral, a little lifted even, partly from feeling like I had fulfilled some kind duty for him in visiting and also in just the feeling of leaving that place and entering the total raggedness of the whole rest of the world.