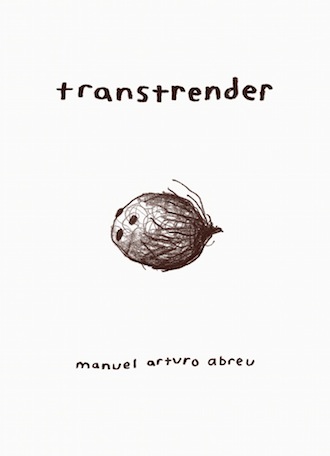 Manuel Arturo Abreu’s Transtrender opens with the question, “What does it mean to mourn what never happened?” This is a sentiment that echoes throughout Abreu’s book in poems that threaten to unravel and collapse in on themselves but never do, poems that are radically unyielding, surviving their own wounds. This book is more than a mere poetry collection however—it instead situates its poems within a specific context, opening with an introduction that is part prose, part poem, before moving into deliberately separated sections. The first section is called “untitled” and contains shorter pieces that are simultaneously named and unnamed. Section two is aptly called “naming”—poems here are titled and tend to be longer, but also more abstract, creating a sense of growth and loss at the same time. By the final section, entitled “amotivational speech” Abreu has moved back into the long poetic prose found in the introduction. Along with that introduction, this section helps to historically contextualize and make larger the poems throughout the book.

The theme of stolen possibility resonates in many of these pieces—“UNTITLED (GESTURE)” includes the line “i feel sad and ancient for seeing a thousand years in every gesture and i get anxious” and ends with “not that you could erase a colonial gesture.” The long and terrible history of colonization, white supremacy, and diaspora seems to haunt the book, a text that directly acknowledges itself as a product of this history. Both liberal and conservative ideas of gender are abandoned in exchange for a materialist and historical analysis that examines the ways in which the white, western gender binary was and continues to be imposed upon colonized people. As Abreu explains, “Trans is a failure of language”—and as a product of colonization and diaspora, Abreu is in the right position to interrogate how one’s gender and one’s understanding of oneself is shaped by the violent erasure of indigenous concepts and languages and how one must do the best they can to name oneself with the language they are given. “self-loathing is called feeling male,” Abreu writes, avoiding biological essentialism in order to get at the deep feeling of experiencing oneself as separate from one’s assigned gender. “Trans” is the word we use to describe this feeling, but Abreu asks us to consider the historical loss that created the vacuum for western concepts like big-T Transgender to fill.

The mourning encapsulated in these poems is as specific and urgent as it is big and lingering. In this sense, what really hits hard is the way in which Abreu’s work manages to be many things all at once while still remaining stable, coherent, and consistent. In “amotivational speech,” Abreu references Edouard Glissant’s claim that the Middle Passage “made possible the consent not to be a single being,” an idea contained in not just the words of this book, but in the way the words are delivered—there is a sense of detachment and irony, there are references to memes and internet culture in general, and many of the poems contain found-text style lines, all of which harken back to the failed project of alt lit. However, anyone paying even the slightest bit of attention to the work here can see that the content, style, and deep emotion found in Abreu’s work separates it completely from that world. Their utilization of these tropes in fact seems to be an intentional subversion of contemporary internet literature, a kind of disidentification that recognizes the inescapable influence of the internet while resisting becoming subsumed by it. This is best encapsulated in “UNTITLED (ARGUMENT STRUCTURE),” which contains striking lines like “the unreal has been colonized” and “nostalgia is violence,” alongside playful lines like “literal frenemy” and “wake up sheeple.” Instead of functioning as a juxtaposition, these lines work with one another perfectly and don’t come across as jokey.

This is not a comedic book, though it contains humor. This is a book that transcends the sum of its parts and reaches beyond its own text. It is not meant to be consumed and then forgotten like a tweet or a Facebook post, though the aesthetic of many of its lines brings to mind tweets and Facebook posts. Instead, this is a work to sit with, to read slowly and then read again, to try to understand before realizing it is impossible to understand, and to finally come to the realization that understanding and empathy are simply not enough. As the poems move from untitled and parenthetically titled to officially named, and even sometimes rendered as the occasional visual image of a selfie or an abstract chart, one is left thinking about what it must be like to assemble a name and identity for oneself when name and identity seem impossible. This book is an impressive work of art about not just a history, but the contemporary condition that emerges from that history. It is essential reading for anyone interested in deconstructing their notions of what gender is and can be, and of what poetry is and can be.