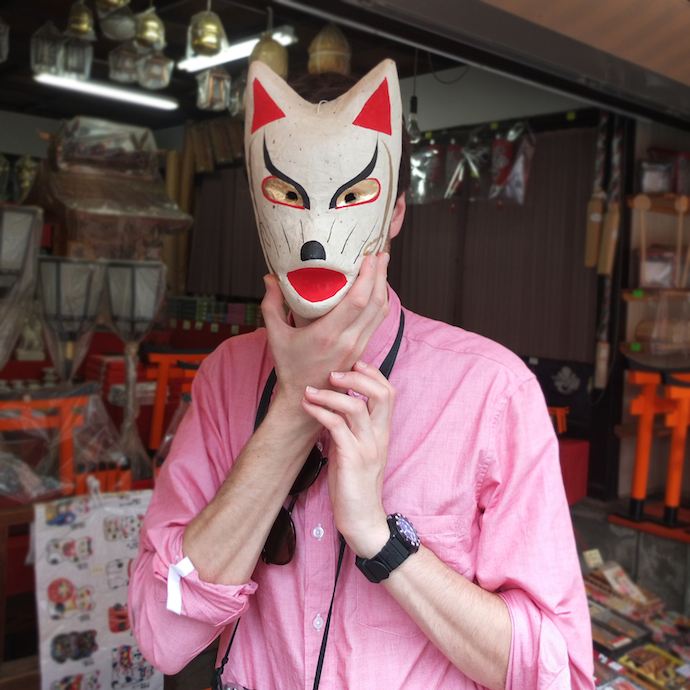 David Norbery fronts the experimental electronic pop act Nomen Novum. As you can see from above, he is a man of many faces. His songs are at once entertainingly facetious, thoroughly genuine, and instantly contagious. I met with the perceptive, quirky, and talented artist at Octane Coffee in Grant Park for an interview. He has recently teamed up with Davy Minor of Deer Bear Wolf to release his latest EP entitled Lookalikes, with a new full-length album on the way. Norbery hopes to go on tour this November. Our conversation included talk of children throwing tantrums, Killer Mike, comic books, and the Atlanta music scene. 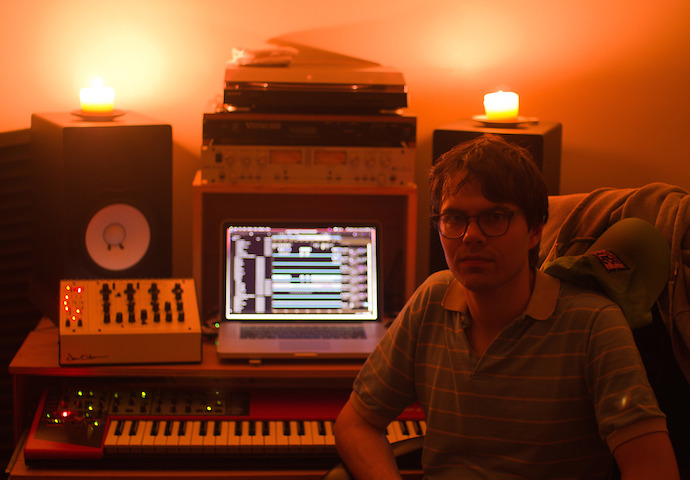 Nomen Novum in his music studio.

SC: Nomen Novum is Latin for “new name”. How long have you been playing under that moniker?

DN: I’ve been playing as Nomen Novum for about seven years. It’s a solo thing. On my second full length, my friend Mark did play keyboards, but it’s always been an outlet for my own projects. I’m still open to playing with other people, but I don’t like a lot of band dynamics. I don’t want to tell anyone what to do. I would have to find someone who was on the exact same page as me, has their own ideas to contribute, and is probably a multi-instrumentalist.

SC: What other music projects have you been a part of?

DN: I was in a band called Moorish Idols that was active until about 2007 and I have a band called Bebe’s Kids, which is dormant, but definitely has the potential to rise up again.

SC: What genre of music is Bebe’s Kids?

DN: The name is pretty indicative of what it might sound like, which is similar to children having tantrums in a surreal nightmare kind of way.

SC: How would you describe Nomen Novum’s sound?

DN: I usually just say electronic pop, but that’s sort of misleading because I don’t think it sounds that electronic. 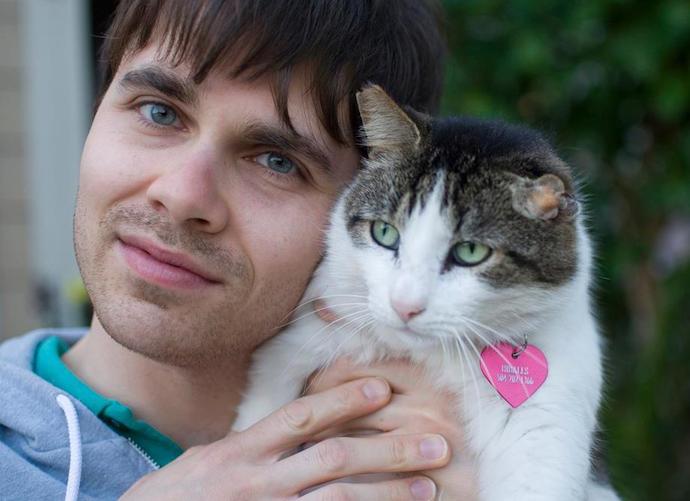 Nomen Novum with a feline friend.

SC: When I saw you perform at a recent house show, you were moving around constantly. It seemed like you were doing a million things at once. Is it difficult to recreate your music live?

DN: I’m getting to the point where I’m not as worried about recreating it, which I think is healthy, because as an electronic performer it’s easy to get progressively more sequenced. I’m trying to make things a little more interesting by using more hardware, doing more live experimentation, and not letting the computer do everything for me. I’m basically always playing at least one instrument now and singing, so that helps keep things more kinetic. 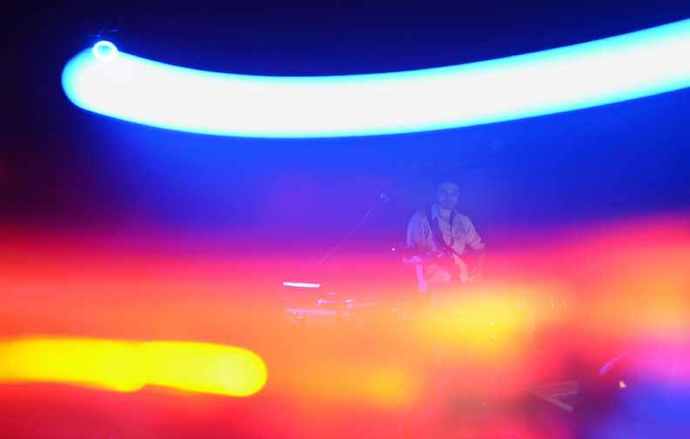 SC: Tell me about your latest release on Deer Bear Wolf.

DN: It’s an EP called Lookalikes and it’s on cassette and also recently came out on Bandcamp. I think the plan is to put the full length out through Deer Bear Wolf as well. I know Davy Minor, who runs Deer Bear Wolf, through being in Moorish Idols. We used to practice in his basement and we played house parties at his place. He has the blog Ohmpark, which has been a really big supporter of me for years. So when he approached me about this EP, it was a no brainer. 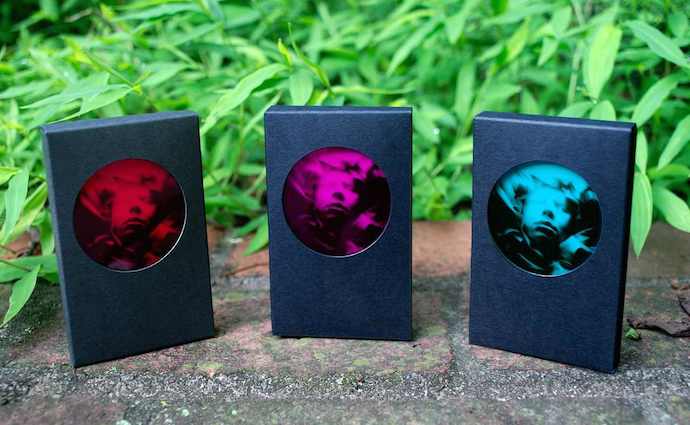 Nomen Novum’s “Lookalikes” tape out on Deer Bear Wolf Records. These gems are purple cassettes in die-cut black cases with colored gel and UV inkjet overlay. They come in three color ways and are hand numbered—edition of 100. Get yours now!

SC: Sometimes you sound like David Byrne, with elements of Pavement—and then at times it sounds like you’re rapping. What’s that about?

DN: That sounds good to me—I like all of that. It’s more electronic than my previous releases. It has a lot more keyboards and the drumbeats are less layered. It’s really catchy, but I think it’s pretty eclectic because it goes to several different places. I’m influenced by a lot of rap. I like Killer Mike a lot, Shabazz Palaces, and I’m a huge Doom fan. I identify with the vocal delivery in rap and my beats are getting heavier. I’m not sure about it being experimental. I know what I’m doing when I do it. Experimental is when artists are really taking chances in real time and for me it’s not really like that. I experiment when I write.

SC: How do you come up with your lyrics? What are the main themes?

DN: On this record I sing a lot about death, isolation, and friends leaving. I’ve had a lot of friends that have moved away. One of the songs is about the idea of theft and what thieves are really looking for when they steal something. There’s a song about an old married couple that sort of turn into one another. It’s funny because Creative Loafing wrote and article titled “Nomen Novum is Happy”, but if you actually read the words, it’s not really happy at all. 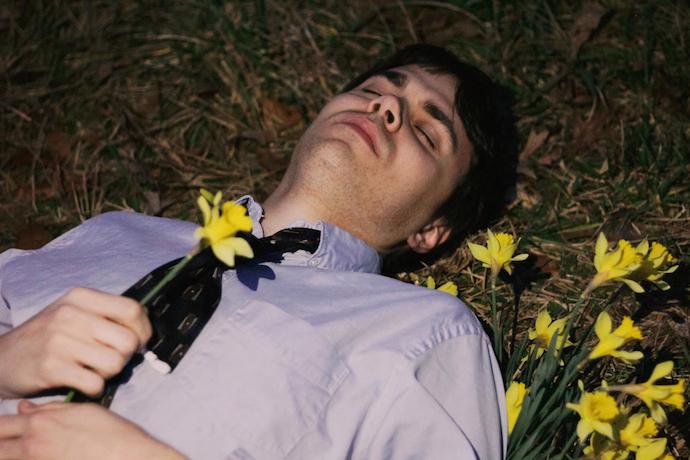 Do not be alarmed! Nomen Novum is not dead—he’s just resting.

SC: What did you want to be when you grew up?

DN: I always wanted to be a comic book artist because I’m pretty good at drawing. It’s rare for me to see a comic book now that I’m really interested in, but it’s also my fault for not seeking them out. I know there’s a lot out there that’s really cool. One day I’m going to release a book of cartoons, but it’s on the backburner.

SC: What is your process for creating a new song?

DN: Sometimes I’ll get a new idea at work, like a melody that I can’t stop humming. I’ll just record it on my phone and go home and start making a beat around it. I’ll improvise different keyboard parts on it until something kind of adds up. Sometimes a song will start with the lyrics and I’ll let that dictate the instrumental aspects of the track. 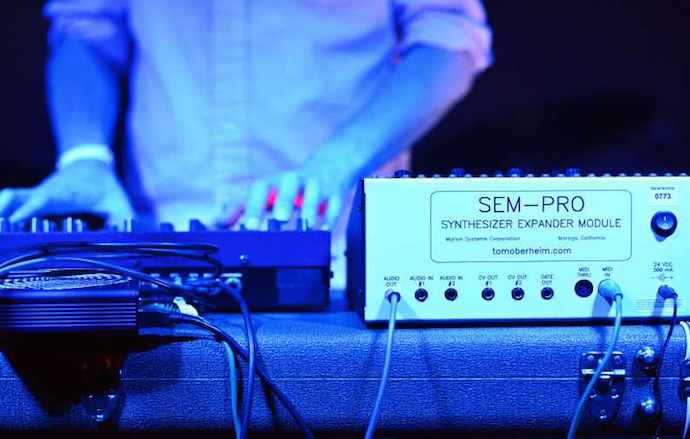 Nomen Novum playing at The Earl, Photo by Kevin Griggs.

SC: What do you like about the Atlanta music scene?

DN: I like that it’s small and everyone knows each other, even if they’re in really different kinds of bands. They support each other. For a long time I would say I was dissatisfied with the disproportionate amount of garage rock that was being created here, but now that’s less in vogue. Bands like Faun and a Pan Flute, that I really like a lot, are becoming more popular. So things are going well. I like the trajectory of Atlanta’s music scene.

SC: So there is a lot of garage rock, rock and roll, and improv music here. But then you’re busting out with this weird brand of pop. Why? It’s awesome, but it seems so different from what other people are doing.

DN: I have conflicting ambitions for what I want to do. Part of me wants to make a really mysterious, almost religious type of experimental music—I still do sometimes. Then part of me really believes in pop music and the idea of creating something memorable that can last a long time, be heard in many different contexts, and appreciated. Like when you’re in a dive bar and you hear some song on the jukebox that you connect with—there’s something in that moment that I can’t leave behind. I can go to a really experimental show and feel like it’s really valid art—but it won’t have that element. Not to say that it’s inferior because of that. One cool thing about just being in a one-person project is that I can release albums with completely different sounds and still call them Nomen Novum.

SC: What are you currently listening too and what were some of your earlier musical influences?

DN: The Faun and a Pan Flute record, the Twins 12” Love Is A Luxury that Geographic North recently put out, and the new Spoon album is actually really good. When I was younger I liked Weezer a lot, and then when I got to high school I was mostly listening to They Might Be Giants. That was the first time I bought everything that a band ever made.

SC: What was your first concert?

SC: What’s next for you? Are you working on anything new or focusing mostly on promoting Lookalikes?

DN: I’ve done something that I have in mind for Zano Bathroom. He’s a prominent Atlanta freestyle MC. We did one track together as Zanomen Zanovum called “Wafflin” about six months ago. I’m working on my full length and the instrumentals are pretty much finished and mixed for it—I just have to finish the vocals.

SC: What is your favorite candy?