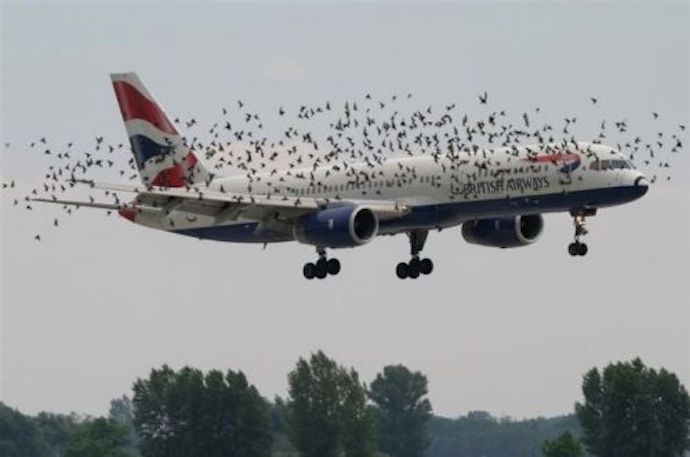 A plane was in the air with us in it. For breakfast, my fiancée had eaten two boiled eggs and half a pear. I had eaten the other half of the pear.

We flew over brown land and gray.

My fiancée sat next to me. She had not thrown up in nearly a week. It had been five days.

“I feel like my food is in my throat,” she said. She was by a window, and I was by the aisle. The last time she had thrown up had been at a beach.

“It’s in my throat,” she said. I told her it had been five days. Almost a week! She whispered to me that she wanted to go to the toilet. I told her she had to keep her food. I told her we had shared fruit.

“Let me through to the toilet,” she said. An old man was across from us. He looked at her and then me.

At that beach, we had gone into the ocean. We swam far out—out near the rafts for mussels. Once we were treading water, she said she wanted to take off her bikini bottoms so that we could rub asses in the water. We had done that once before, and it had made us laugh, and she wanted to do it again.

But in the ocean that day there were millions of small red creatures—like bugs. I asked her if she saw them, too.

She said of course she could see them. What did I think—-that I was so special?

They were biting me. Or they were pinching me. I felt small stings, and I couldn’t tell if the creatures were doing it with their mouths or with their pinchers. Or maybe they had barbed tails with which they hurt me. I was worried they’d swim inside me and do what they were doing on my outsides in my insides.

I asked her if they were pinching her, and she said no. She said let’s rub asses.

She took off her bikini bottoms and clutched them in one hand as she treaded water. I said I was wearing a one-piece and that I couldn’t simply take off my bottoms.

“What? You’re now shy?” she said. She said to take off the whole one-piece and be nude. That, or she said I could pull the bottom of my swimsuit to the side.

“Or I’ll rip it,” she said. She swam over to me. She put her face close to my face. She treaded water, reached down, and ripped my swimsuit at the crotch. The rip happened underwater, but I could still hear it rip loud with my head above the water.

After she ripped my swimsuit, I swam back to the beach. I covered myself with a towel we had left out and sat down. She stayed in the ocean for a time before she swam back in, approached me, and threw up on my feet.

A flight attendant came over to us.

The flight attendant said to let my fiancée out—-that is, if she had to go to the toilet to throw up.

“Or you can use the bag,” the flight attendant said.

The old man began to say how I had not let my fiancée go to the toilet and how I had hit her. I had made her face bloody, and look, now, she was bleeding. He unbuckled himself and stood in the aisle. The plane shuddered. He said I wanted to push her out of the plane. I had threatened everyone on the plane. He said I would throw out everyone and that with everyone out, I would take the plane and fly it to where I wanted to go. I would go back to an ocean I had told him about.

Rhoads Stevens was born in Baltimore, grew up in Honolulu, and lives in Providence.