My air conditioning breaks then the politicians swarm my city, locust-like, in the thrall of a heat wave. The temperature flirts with one hundred as the Democratic nominees, delegates, senators, supporters, and their rivals descend on Philadelphia for the Democratic National Convention.

The names of the famous float through the streets like phantoms.

Wolf Blitzer is at the Starbucks on 12th and Market. Geraldo is at Fishtown Tavern. Lance Bass is taking the Broad Street subway. Anderson Cooper is working out at 12th Street Gym. Jesse Jackson is in the lobby of the Loews Hotel. Joe Biden is eating breakfast at McGillan’s. Bill Clinton is at WHYY.

The FBI sets up sleek black trailers next to my office. From the eighth floor, we look down at the undercover agents. They wear cargo shorts, button down shirts, guns holstered on hips.

It is a strange mirage: The asphalt trembles, the agents walky-talky, the men wear Robert Longo suits, the women wear prim dresses and sky-high heels, the heat warbles over the news vans and motorcades, red and blue lights are always flashing.

“These aren’t normal days” is the mantra of a good friend of mine.

It might also be, it seems, the tagline for the Democratic National Convention.

“Let’s get a drink after work,” my boss says.

We snag two chairs at Bank & Bourbon, on the first floor of the Loews Hotel. Most of the press stays in this hotel. Cops are posted up at the front door. Men with earpieces whisper into their collars and wrists.

“Cory Booker was here. Jesse Jackson just left,” the bartender says. “And that guy is famous.”

“I have not,” he says. “But I have it on good authority that security will be very high at Parc in Rittenhouse tomorrow around noon.”

“Who are you voting for?” they ask.

“It doesn’t matter who wins. We get paid either way,” one snorts.

I take another sip of my drink and then I step outside to check the scene. A man walks up to me in a Bernie Sanders t-shirt.

“You know this whole thing is a game, right?” he says.

“This election,” he says. “You know Trump is just a foil so Hillary will have to win, right? Don’t fall for it. Don’t vote for anyone.”

I consider his position.

The secret service clears the street again. A motorcade of cops on motorcycles flashes past. I try to look through the tinted windows of an SUV, but only see my own warped face in the black glass.

“Let’s go,” says one of the men in the perfectly tailored suits.

Then we are in a car. Then we are standing in front of a nightclub, a line wrapped around the block for the BET party.

“Let me say a few words to this gentlemen,” the man in the perfectly tailored suit says, stepping toward security.

“Would you like to go back to my hotel room?” the other man hisses.

I shake my head.

The velvet rope lifts. We whisk past security and into the club where two DJs battle on a stage lit up hot pink. I dance like nobody is watching, but I know the man in the tailored suit is.

I notice former Philadelphia Mayor Michael Nutter across the room. I flutter my fingers at him. He waves back as if we are lifelong friends.

“You know the Mayor?” the man in the perfectly tailored suit asks. His hand is on the small of my back.

It is the first night of the DNC. I am already a liar, already half-politician.

This is what casts a glitter over the rest of the week: Working the room, collecting business cards of people I’d never call or who would never call me back if I did. Texts shot off like wildfire, connections probed and primed to get in, to get on a list, to be there. Where, exactly, is never clear – but it is always somewhere else and it is imperative to arrive.

It’s a strange place, America. To be in the epicenter of this leg of our democracy is a crash course in discourse.

In front of the Pennsylvania Convention Center, three men carry black signs promising the apocalypse if we don’t repent.

YE MUST BE BORNE AGAIN

KEEP YOURSELVES FROM IDOLS

EXAMINE YOURSELVES TO SEE IF YOU ARE IN THE FAITH

FLEE FROM THE WRATH TO COME

“WHORES SHOULD REPENT FIRST,” one man screams into a bullhorn. “YOU KNOW WHO YOU ARE.”

In the crowd, a woman walks past another woman.

“Great to see your third party eating a pile of fresh shit yesterday,” she hisses.

“Leave it alone,” the woman shoots back.

We are all dizzy in the heat, as if we will never be cold again. Across town, there is a Black Lives Matter march.

And every day at the Convention Center, a new form of protest arrives.

A man walks by holding a sign that says “MONEY RULES.”

“Have you seen Joe Biden?” I ask a nearby cop.

“No motorcades yet,” he says. “But I’ll tell him you’re looking for him.”

A group of women pass by in hot pink shirts, raising awareness for breast cancer.

“And it’s like, you know, they just keep raping us,” one woman says to the other. “And we have to stop them from raping us.”

And this underscores one of the strangest parts of the convention: Trump’s name is never mentioned. Instead, it is a parade of causes. 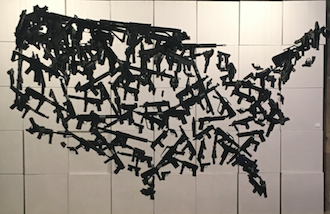 Identity Crisis by Michael Murphy, at the Truth To Power exhibit.

We swelter down the street to an art exhibit called TruthToPower. Banksy is somewhere among us, according to the hot whispers.

Once inside, it hurts to look at most of the art. It runs the gamut:

A series of guns dangle from the ceiling in the shape of the United States.

A fluorescent light spells out the words “WHITE PRIVILEGE” in the shape of a cross.

A series of cardboard signs from homeless men spells out requests for food and money.

Throughout the gallery, everyone is taking pictures. They consume the art from behind phone screens. Celebrities will come through the gallery and do the same.

“It’s time to Instagram our rage,” is the general consensus.

And it is noble, to raise awareness, to spread the word. But as we swelter home, I can’t shake a question that rings in my head: Exactly which power is being told the truth? And were they at the exhibit?

The Daily Show interviews people out front. Ty Dolla Sign is on stage. Then the Black Eyed Peas are on stage. I think: What brought me to this point in my life?

A man spills his beer on the floor and a crew brings out a mop. Above us, chandeliers glitter. The crowd alternates between actual fans of the Black Eyed Peas and political what-have-yous.

I stand next to a campaign donor in a crisp white shirt, tailored jacket, expensive shoes.

“I’m important to the party because I served in the military. Not many Democrats have,” he explains.

“I appreciate art,” he says. He puts his hand on my hip.

I step away to get a drink. A beautiful woman stands next to me in a prim dress, sky-high heels, perfect eyebrows.

“This is crazy,” I say, gesturing around us.

“How do you feel about Hillary?” I ask.

“She’s not exactly my kind of feminist,” I say.

She looks as if she might scream or cry or both.

The final night of the convention is the big one: The Hillary speech.

All day, the questions buzz: Who can get us into the Google party? Who knows where we can go? Can anyone get us in to see Hillary speak? Has anyone talked to the men in the tailored suits?

The rush of it built to this crescendo of a day: The heat is even hotter, the big names, the accidental meetings of people who have pull. I become frantic over District Attorneys and donors, over delegates, and Senators.

In the lack of tickets to see Hillary, we return to the Loews hotel for a speech viewing party.

My friends and I sip drinks and stare at the screen: Chelsea Clinton, Katy Perry, a video montage of all the wonderful things Hillary Clinton has done in her life and will do in ours.

State police and secret service guard the front door. The Democratic supporters stand among cardboard cutouts of Hillary and cardboard donkeys. Their faces are glazed at the screen, too.

I think about how I’ve been caught up in a flood of politics when I hate politics, how quickly I’ve been wooed by the men in the tailored suits, the scent of power leaking through the city like the scent of bad trash in the sun.

I leave everyone behind. I crawl into my bed. I watch Hillary speak alone.

There she is. In a white suit, she speaks with passion about doing the right thing, about equality. I want those things. I feel she is good for that.

Red, white, and blue balloons fall all around her. Confetti explodes. A hopeful song plays. It is the perfect scene, orchestrated like a movie.

I should be overcome with emotion about the first female presidential nominee. I should feel ceilings shattering all around me. I wait for the goosebumps, but they do not come.

Instead, a fresh dread takes root in my gut, a feeling that has been hiding all week and only now emerges. It is the feeling that I am a woman with no country.