“Smitten by the algae”: A Review of There Was So Much Beautiful Left 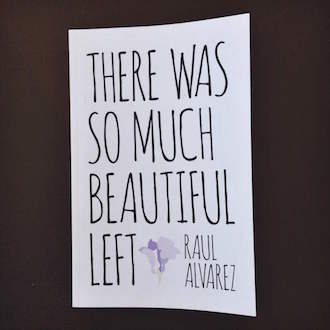 There Was So Much Beautiful Left
by Raul Alvarez
boost house
90 pp. / $12

Raul Alvarez’s first poetry collection, There Was So Much Beautiful Left, is an engaging text whose poetic techniques and ideas orbit a heavy central story: the mental illness and attempted suicide of the narrator’s mother in Fullerton, California. The looming specters in the poems are the possibility of redemption and the importance of being happy about how sad you are (in fact, this is one poem’s actual title). Despite some overly saccharine moments, its dynamic stylistic range and empathic investigation of intimacy make it a strong debut with a brave goal: mining the beauty of hard circumstances.

If you’re familiar with the ebullient maximalism of other work published by Tucson-based independent press boost house, you might sense its echo in the texts boost house has published so far, such as the formal experimentation and chicanery in THE YOLO PAGES anthology, or the plangent, tumblr-ready beauty of Joshua Jennifer Espinoza’s debut. 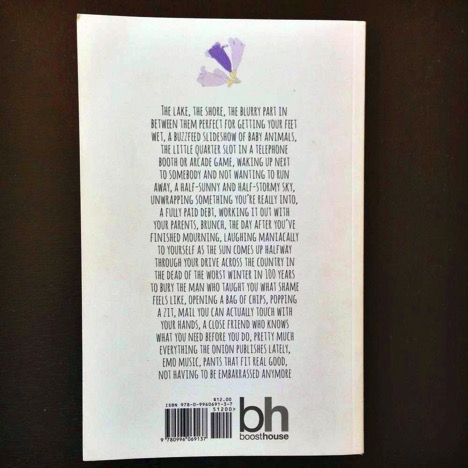 Alvarez’s debut bears boost house founder Steve Roggenbuck’s influence as well. Just check out the excerpt on the book’s back cover, pictured above. And then there are moments like when Alvarez says, “Tell everyone you pass quietly and gently that they are so very lovely,” or “I know I’ve said I love you too many times in this poem but it’s okay because it’s a rhetorical device. Rhetorical devices are language tricks you can use to tell people you love them.” While his poetic voice generally falls flat when it attempts to break the fourth wall, these gaffes are forgivable due to Alvarez’s way of stylistically turning on a dime from one poem to the next. The alt lit cadence of “Sorry Poem,” with groanworthy lines like “I am sorry our species can’t stop yoloing the earth away,” gives way to the breathless, fractured rhythms of “Rapid Cycling,” with stanzas like:

our small when some kids found out so 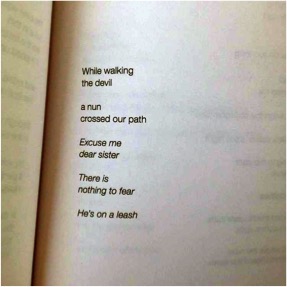 The poems in the book occupy various points along a continuum from effusively verbose to hermetically lyrical. I find myself drawn more to the latter, such as the book’s striking second section describing a romantic relationship with the devil: “in the morning / the bed is / his swelling / from a whisper.” In showing that even the devil may have some beautiful left, these poems are a powerful articulation of the book’s goal, as well as a way of grappling with its potential problems: courting the devil, the embodiment of evil, potentially involves tacit acceptance of his actions. The same goes for mining systemic oppression or the ravages of mental illness for poetic beauty.

The devil tryst poems pair with the first half of the fourth section, which deploys theosis (becoming godlike) as a literary device, structured after John 3:16. In these bleak prose pieces, the world that god so loves variously becomes a battered spouse, a 24 oz can of malt liquor, a belt fashioned into a noose, a car driven into a brick wall, a razor used in self-harm, and psychiatric medication. Each moment is drawn from the narrator’s family history, such as his great-grandfather’s suicide and his mother’s suicide attempt. It’s a brutal reorientation of the notions of sacrifice and lineage that perfectly complements the coy glibness of the devil section. These two parts, along with a seven-poem cycle in section 1 titled after the days of the week, are all stellar, somehow simultaneously cryptic and heart-on-sleeve.

Another powerful moment in the text that deals with lineage comes at the beginning of section 3, with two poems whose titles are racist comments from Foxnews.com users. Alvarez responds to these trolls with intimate poems about his grandparents whose pointillistic details emanate heartbreak. In the first, the narrator describes his grandfather carrying a bucket of water home from the LA river every day after his father’s suicide: “Had to boil the smell off. // I don’t know if I can claim the suicide / as my inheritance– // but I taste the river in my sweat.” Research shows that the trauma of ancestors is passed on epigenetically, so the narrator may not be so far-off in his claim about inheritance: perhaps its impact is still so deeply felt because descendants inherit their forebears’ pain.

I have mixed feelings about one of the book’s longest poems, “Make Me a Hoot Owl, Sweetheart.” It seems like a central moment, but the dynamics at play trouble me. In prose, this piece recounts the story of Kelly Thomas, a schizophrenic bipolar man for whom the narrator’s mother often bought burgers. Kelly had the same diagnosis as the narrator’s mother, and was killed by police. The best part of the poem is the specific naming of the guy who called the cops–“the owner of a band called the Slidebar… he used to be the lead singer of the band Lit whose biggest hit was the song ‘My Own Worst Enemy.’” The worst part is the way that this instance of police brutality becomes a platform for the narrator’s feelings of shame. Not only is it politically inept, since his guilt does nothing to affect the American police state; it’s a narrative failure, with no real delivery at the piece’s conclusion. In the end, I felt like I didn’t learn much about Kelly, the narrator’s mom, or Alvarez’s stance on police brutality. 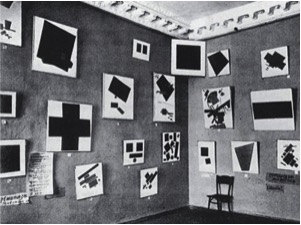 Clearly one must tread carefully in sussing out beauty from trauma and tragedy, especially in the case of a stranger whose story one mostly knows from the media. Many of us cringed at Ariana Reines’s Sandra Bland poem. What exactly does a poem that wouldn’t exist without violence do, if it’s not a contribution toward stopping violence? Well, from one angle, it looks like loving tribute; from another, justification of that violence. The justification exists precisely in the sensation of beauty the violence engenders. This representational problem is one variation of what we could call the “Malevich crisis”–how does one critique something without replicating the object of critique? While poems like “Make Me a Hoot Owl, Sweetheart” fail under the weight of this question, others, like the devil cycle and the John 3:16 cycle, grapple with them in exciting ways.

Overall, the book’s powerful moments outweigh its more anodyne tendencies, and it marks a strong debut for a promising young voice in (Mexican-) American poetry. I certainly appreciate Alvarez’s dedication to a painfully earnest poetic voice at times, but I found the book’s more hermetic, elliptical voices to have greater appeal.

I’ll leave you with one of my favorite poems from the book, “Tuesday”:

I say Cadillac is beautiful. Soft leather never demands what is pink inside my bones. He and he and he among us. I am smitten by the algae in our dirty lake. Finally there is joy at the end pieces of bread. The two recite commercials as they rip. Give the wet birds my lunch, I can’t wait to see my skull

manuel arturo abreu (b. 1991, Santo Domingo) is a poet and artist from the Bronx. See more of their work at twigtech.tumblr.com and @Deezius.