THEN I BUST OUT: Review of Dead Bat (Stereotype out of 10) 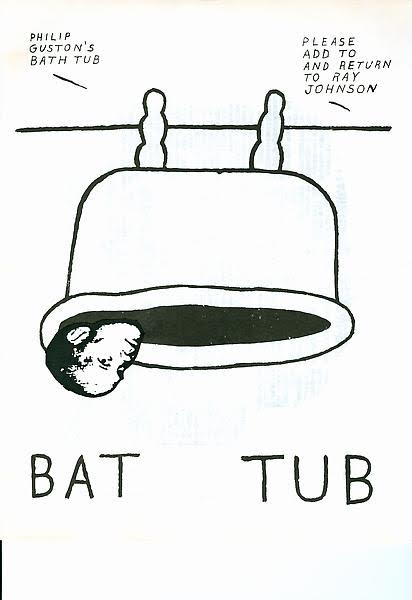 The street allows itself to be washed by dirt
and shit and slime,
garbage grimy corners,
and Beckett and I start and stop
up it, pausing to smell the dirt and shit and slime.
I consider nothing and everything
without thinking, mindless,
same as the consideration I later give
to the heavyset man stridently pushing
a lawnmower against a tranche of foreclosed grass,
his bright red shirt reading in bright white font,
Bad Choices Make Good Stories.

Without considering, so when I later arrive home
and discover the dying bat facedown in my bathtub,
its body a confounding mix of fur and reptile,
the bat is not dying nor a bat at all;
I don’t what it is, what it feels.
Immediately mindful, I panic
and, after a stunned two minutes of scrutiny,
walk three feet to the right and shut the bathroom door.
Procrastination is a belief in what might
disappear without my doing anything
about it. Poetics of inaction, a mountain
that allows myself to happen
to everything else,
thereby ensuring the ignorance of my safety.

Meanwhile, Beckett notices my alarm and wags his tail nervously.

I grab a clear Tupperware-as-confinement assemblage
and, after a half hour, return to the bathroom.
I have Interneted and textually conferred with friends
and now believe I know a dying bat when I see one.

In the bathroom there has been movement
—a faint arcing, but it has been slight.
With a dull implement I posteriorly poke—nothing.
Then I hesitantly Tupperware-as-confinement confine—no reaction.
Dying bat or dead bat now caged,
I once again leave the bathroom.
(All happy cowards are alike; all unhappy cowards are unhappy in their own ways.)

There’s been still no change upon my return ten minutes later.
And then my panicked flurries of movement:
with a swarm of paper towels I pick up the bat,
race downstairs and throw it on the front lawn.
It is 6:00, the afternoon flaying the evening
with a recoiling whip of cloud and darkening sky.
It is 6:00, muddle of gloaming.

II.
In a maudlin, 19th century poem published in 2017 on the website Verse Daily, a poet writes:

There may be hundreds of white birds that aren’t called
doves. But
it’s too late to wake my husband, and
I’m too tired to look it up. So

tonight, to me, they’re all called
doves, doves, doves. And someone’s

stitched my soul to one, or
so it seems to me because

tonight, I’m riding her white wing as she
carries the coded message of my mortality
with her across the Atlantic, the Pacific, the Gulf
of Mexico—completely free
of our two bodies…

The poet writes with an insularity I find both self-absorbed and antiquated; the wing-riding, the soul-stitching. And yet reading this a week after my dying-dead bat incident, I could relate.

My bat’s first and last name was DEATH; the main purpose it served in my life was to not exist, but to also cause me alarm before slowly, silently not existing. Upon initially seeing the bat my immediate thought was ridding, through death or some other finality, myself of it. On self-absorption and self-consideration before any and everything else. That obliterative silence.

There are over 1200 different types of bats in the world,
from Bumblebees to Giant Golden-Crowned Flying-Foxes
to Vampires.

I do not know what type the one that,
shrinking itself to the size of a dime,
then crawling through the air conditioner grate
to die alone in my bathtub, was.

Including pigeons, there are 310 different types of doves, from blue-headed quail doves to long-tailed ground-doves. As with bats, the differentiation between all of them is mammoth and yet, in the moment, slight: it flies, it moves, take caution if it’s coming at you.

Traditionally doves are seen as symbols of peace and purity; innocent creatures forced to exist in a forsaken world. Bats, on the other hand, are often viewed as half-malignant creatures of the night, dirty, dark.

These stereotypes are of course wrongheaded. Bats are exceptionally clean creatures—their cleanliness far exceeds that of a dove, for instance—and very caring of their brethren. When orphaned, young bats are often taken in and mothered by completely unrelated families, and certain bat species are aggressively altruistic, sharing food with those from their community that are injured and thereby endangering themselves by trying to save others less fortunate. No bat species sucks or would ever attempt to suck human blood.

Antiquated and faulty, my bathtub is of the clawfoot variety—
it wasn’t my choice but I mindlessly accept it
every time I step inside.
What can I do? I think without thinking.
When I checked the next morning
the dead bat on my lawn was still dead
and, using the same paper towels
I’d used to evacuate it from my bathroom the night before,
I picked it up once again, held its body
-as-soul, soul-
as-body
in my deathly hand.
Then I deposited both concepts in the trash can,
went back inside the house.
Beckett looked up at me, wagged his tail nervously.
I wagged nervously back.

Amy Lawless is the author of the poetry collections My Dead and Broadax (both with Octopus Books). A chapbook A Woman Alone is out from Sixth Finch Books. With Chris Cheney, she is the author of the hybrid book I Cry: The Desire to Be Rejected from Pioneer Works Press’ Groundworks Series (2016). Poems have recently appeared in The Volta, Washington Square Review, Bennington Review, and jubilat. She was a 2011 New York Foundation for the Arts poetry fellow. She lives in Brooklyn.

Jeff Alessandrelli is the author of the poetry collection THIS LAST TIME WILL BE THE FIRST and the essay collection The Man on High: Essays on Skateboarding, Hip-Hop, Poetry and The Notorious B.I.G. Recent work appears in Poetry Daily, The American Poetry Review and Lit Hub. Jeff also runs the vinyl record-only poetry press Fonograf Ed.