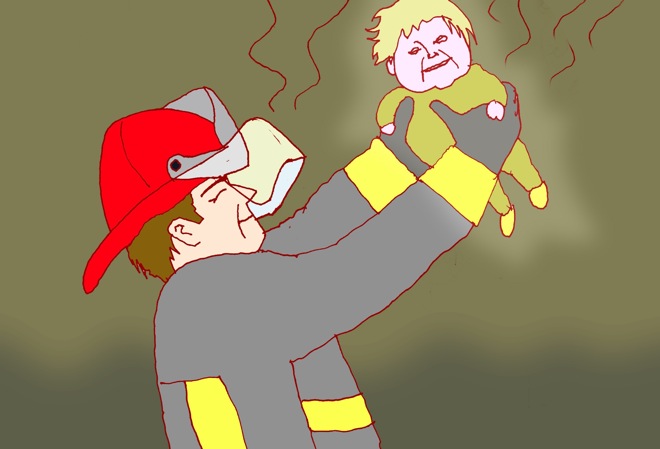 We too had gathered to watch the fire splash against the car windows, the lake, and people’s glasses. We were contemplating the correct way to respond. Mouths were open. We thought that if we clapped our hands? Yes, if we just clapped them tentatively? Then everybody else would start clapping their hands, we thought, but nobody joined us, so we stopped doing that.

The fire tore into an ugly warehouse and refigured a glowing bud, a sort of flower.

Captain Uncurt walked up to us. He needed our help.

No, there must have been some mistake. We weren’t any good at fighting fire. We had no training in it. To another extent, it just wasn’t our style, not at all, we explained: all the charging in, the red splatters of light, the clinging smoke, and we tried to communicate this with our hands, our rational, simple hands, while backing silently away.

The curb met us. ‘Not interested,’ we finished by saying, but Captain Uncurt dropped his hose.

Captain Uncurt was holding a giant black hose but when we shook our heads and our heels scraped against the curb, he dropped it.

Everyone was staring at the black hose he dropped in front of us.

An old woman told us to Go. Then all the other old women standing on the street followed her lead and said Go. Then the younger women said, Go, Go. They had picked up Go like we had earlier hoped they would pick up our clapping. The women could get away with chanting Go, what did they have to lose? Uncurt would never send them into a fire, would he? But the men were quiet. For men chanting Go was the equivalent of enlisting themselves. The men looked at our shoes, then at the curb we had affiliated ourselves with. They were involved in an assessment of our curb. They were hoping. Hoping what? That it was indeed a valid retreat. But these men didn’t stand a chance: the women had already enlisted them with their Gos.

The men took a deep breath and ran into the warehouse.

But fighting fire was not our talent, so we stayed. We partway realized a step forward, like the other men had stepped forward. We noticed a rectangular storm drain framed with metal bars through which a faint account of steam had rose to haze us.

Captain Uncurt wrinkled his face at this.

The women, having turned, were wrinkling their faces at this, too. Old women squishing their faces into outlandish balls. Gnarled hands opening and closing. ‘Okay, Okay,’ we said. ‘We’re going,’ and we stepped toward the fire, partway realized another step forward, then turned and bolted for the forest.

From a hill we watched the fire. In the middle of the dark smoke a knot of much darker smoke began to unravel.

We were sitting on something unnameable. The stump, or the shelf of rock that we were sitting on, was not uncomfortable, but in our state of indignity we could not even put a name to it. We had not lifted our eyes from the fire. Flames, rightfully, are compared to tongues in how they seem to taste and find agreeable whatever flavor they consume.

We watched Captain Uncurt run outside, dump a body, then run back inside.

The fire was sculpting the warehouse into a sort of jewel.

Some other men ran outside, dumped bodies, waited for the signal from Uncurt, ran back inside.

More of this. All the while the women were chanting. Smoke sat atop the jewel like a black crown. Bodies, chants, spectacular—not that we were enjoying it, or that we were on the fire’s side.

But eventually it had to end.

The chants burned out with the fire. The men were coughing. The young women were wiping soot from young men’s lips in order to kiss them. The old women patted their old men on the back, and Captain Uncurt hoisted a child into the air. The trophy.

It was all over, not that this bothered us, and the child was serving as the trophy.

The child was completely covered in soot. A rescued smile broke past the soot.

The smile was twinkling, and it was over. But what if it wasn’t?

A stain flushed over us. The smell of something inedible wafted up the hill from the warehouse ruins.

What if there were more children inside? we thought. More trophies?

They were celebrating down there, touching each other with flattened, playful hands, paddling each other? As though it were a game to see how many backs, bottoms, and shoulders could be paddled? Occasionally missing entirely and patting the puff of air where a back or bottom had just been?

If there were more children or trophies trapped inside then it would be incorrect to sit where we were sitting and watch everyone kiss. It would be worse than running away, or starting another fire.

We, who were planning to be the best some day, were watching Uncurt hoist this soot-covered trophy, when it might not be over yet? Then an old woman did an old fashioned dance—a jig?—What? What? The jig pushed us over the edge and sent us tumbling down the hill.

Inside, it was still hot. Still a little smoky.

We poked around. It was very dangerous. Nothing on fire anymore, and the initial danger was no longer present, but a second, spiteful, thwarted danger seemed to be in the air, in the scorned walls and ceilings. The floors detested the walls.

What was left of the factory was capable of anything.

Wedged behind the cabinet? A dog? A breathing dog?

Kind of breathing. Here, we marked for future reference, was the dog.

So back to the dog.

We looked around for something else. Meanwhile, the dog, still kind of upright, kind of in the fetal position, remained. The dog still had certain supports and eaves. There were balconies of red skin under its eyes. In the factory you could see scorn in the air, in the griddle lines across the walls, emanating from everything but the lone dog.

The dog had been caught in the middle, caught in the crossfire, so to speak. A yelp followed, one that scraped the bottom of the barrel of yelps. In its own way, the dog was warning us that it would not be yelping again; this was the last one, the final yelp, and next time it would have to come up with something else, a new ending.

We ran outside, not hoisting our trophy like Uncurt had done, and not exactly dragging it from a chain leash, but joining the celebration in our way.

Rob Walsh is the author of Troublers, available from Caketrain.