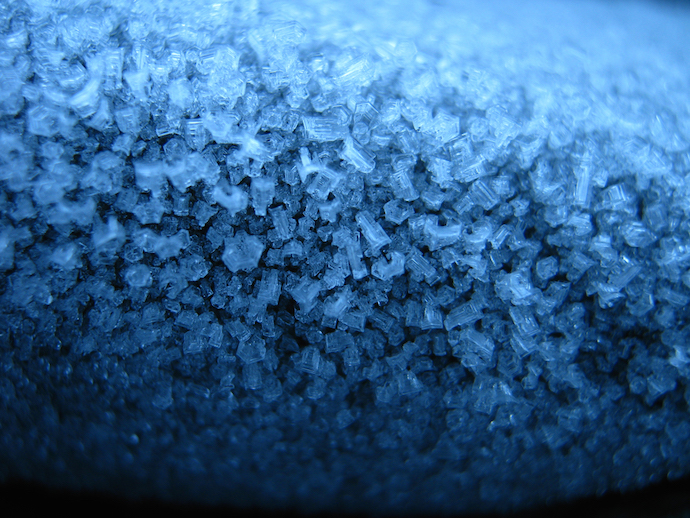 The thawe began this yeare … at which time there began to spring up… a
certain stragling grasse, with a blewish flower
–Robert Fotherby, 1613, English traveler in Spitsbergen

it is a land
with and without
people

water transforms forcefully
engage the scree
interior to your complexion

dovekies wheel and circle
above the frozen sea

the loss is distributed across sinuous silhouettes,
combed over in hoarfrost before the whiteout descends

how many realize that the blue-print is almost universally
at the foundation of everything at the present time?

between thaw and frost:

the alternations squeeze and move stones
pressing them upward, outward
arranging them
from tail to tide

I want to understand what opens up in this dis-attended collection at the periphery of perception, at the seeming limit of its transformation. This incredible freeze reemerges to me as an ecological archive for some later, more subtly perceptive intelligences to uncover. In glacial caves, I intuit how the blue ice whorls resound with an oceanic rhythm perhaps also common to light. Its blueness indicates a cold birth, an emergent destiny. I put my open mouth to it, feel millennially ancient ash caught–trapped–in its beveling. Who speaks?

Other [exploited] archives …
owe their significance
to some individuals of
certain species growing at
the margin of their ecological tolerance,
which

an integrated fact of resilient ((light
through tension, then clarified forms

a lark went trilling up, up into the blue

try to provide any imitation of this sheen or hue

has shielding the body had any marked influence upon the human organism?

((order may arise from the present chaos

Sueyeun Juliette Lee grew up three miles from the CIA. A former Pew Fellow in the Arts, her books include That Gorgeous Feeling (Coconut), Underground National (Factory School), and Solar Maximum (Futurepoem) as well as numerous chapbooks. She founded Corollary Press, a chapbook series dedicated to innovative multi-ethnic writing, and writes reviews for The Constant Critic, a project of Fence Books. Her critical essays explore Asian American contemporary poetics as well as the imaginations of spaces and time. She has held arts residencies in poetry, dance, and video art in Hafnarborg (Iceland), Kunstnarhuset Messen (Norway), and UCross Foundation (Wyoming). You can find her at silentbroadcast.com.