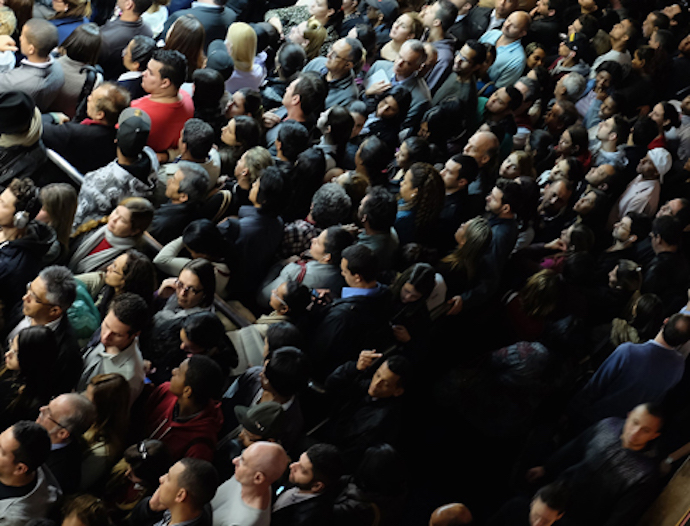 They came in droves. They came ready to conquer. They came sweating profusely, faces red, hands clammy. They came with short-sleeve polos and white undershirts. They came baptized in bad cologne, definitively picked out by their mothers. They came with one objective only: to invade my space. And I was thrilled.

If today, a man I did not know was to sidle up behind me, grab my waist, and press his groin to my ass, I would call the police. But how to explain this to my 10-years-ago self, who promptly would have started gyrating her hips in response? How to tell her that this is precisely what to fear.

Darya is a patient teacher as she coaches me on how to grind. She is holding a giant teddy bear that was inevitably won from a fair and she is no-nonsense as she chants rhythmically over Missy Elliot: “figure-EIGHT, figure-EIGHT,” which is the direction my pelvis should be moving in, buried into the bear’s ill-defined genitals. We are nine days away from the first dance of the year, and I need to get this right. We are freshmen at an all-girls high school, and opportunities to interact with boys are scarce. When I told Darya I’d only ever slow-danced with boys, she invited me over to her house, and here we were in her basement, teacher and student, trying to freak like Missy.

First, Darya shows me some music videos. Then, she does a hands-on demonstration, me playing the male with my hands on her hips, and her, shaking her ass into my groin. Nervous laughter abounds. I discover that grinding is physically joyless and abundantly awkward. Here I am, staring straight ahead, while someone comes up behind me– “they won’t ask,” Darya warns– and holds my hips. At the end of the night, she is satisfied or at a minimum not offended by the way I can shake my ass. We fall asleep on the floor of her basement, and I feel deep gratitude.

Somewhere over the trajectory of 10 years, I stopped wanting my space invaded. When did this happen, and why?

There was a man who put his penis inside me while I slept. I had said I did not want to have sex, and he had agreed, and then hours later I awoke with sleep in my throat and a penis inside my body. I was confused because I did not remember changing my mind. I said he had to go, and he apologized, and I walked him to the door because that is how my mother raised me. I did not call this what it was because I had told him he could sleep in my bed next to me, so I felt the usual things, but mainly my own stupidity and the shame it wrought. If he were to read this now, he would not recognize himself, and that’s how innocuous it felt until years later, when I remembered how clearly I had said no, and how, when I ran into him in a class a year later, he would not look at me in the eye.

Grinding is stratospheres different than assault, but how different, when there are so few questions asked or expectations set? We are taught to be lusted after, and we are taught to crave this lust: an anonymous body pressed against yours, and you, performing. In middle school, in high school, the boys never had to ask. Why did we start expecting them to? We say we are offended now, and we have a right to be, but not too long ago, we invited it. We trained men to objectify us, and they did, and they continued to, and now we are angry.

When I told my father what happened to me six years after the fact, he told me he hoped I’d learned my lesson, and in that moment, I remembered why it had taken me six years to say it at all.

I am in an Abercrombie mini-skirt and I know it is a matter of time. There are legions of boys in the gymnasium where my friends and I rock climb for Physical Education, and people are getting physical: Darya has already grinded with two different boys. I am slightly indignant because I think I am better looking than her, unaware that these boys, barely pubescent but not ignorant to fear, can see it in me. What if I’m bad at it? What if they know it’s my first time?

Darya comes up to me, grabs my wrist. Her forehead is shiny with sweat and her hair is a black curtain down her back. “There’s someone coming,” she says. “Don’t turn around, but I’ll scratch my throat if he’s cute so that you know.” Sure enough, two hands make contact with the denim sealed to my body. I don’t remember the song that was playing in that moment but I do remember the feeling– of panic, of joy- that someone chose me, wanted me, liked the back of my knees enough to come up behind me without saying a single word and press their penis into my butt while music throbbed around us.

Darya dutifully scratched her neck so I knew the person behind me, while ill-mannered and presumptuous, was not unattractive, and I dutifully shook my ass to the beat, and we stayed glued together like this for two songs, this faceless boy and I, until he released my hips and walked away and I, giddy, ran into Darya’s waiting arms. The triumph of being desired.

A few weeks later I watch a video in Biology of two frogs mating, and I see the male frog mounting the female frog, clambering on top of her body, and her marble-sized eye barely blinking. “Ew,” I say.

In my first year of law school, we learn about sex as a crime. In Statutory Analysis, I learn that historically, if the act of sex is not accompanied by physical force or the threat of force, it is not rape. I learn that these days, all states need to prove is a lack of consent, not resistance. I learn that some of the men around me, the future lawyers of America, do not seem to understand this vital concept.

There is one case we read, In re John Z, a California Supreme Court case from 2003, two adolescent boys raped a teenage girl. “If you really cared about me, you wouldn’t be doing this,” she said, by one of the boy’s own admissions. “I kept trying to get away from him, but he was so much bigger,” she wrote in her testimony. The case law that emerged was straightforward: continuing sexual intercourse after the victim revokes consent is forcible rape. Judge Brown, in his dissent to the majority opinion, asked if the victim’s “silent and ineffectual movements could be misinterpreted.” Is persistence the same thing as force, was his fundamental question. This seemed to puzzle a few of the men in my class.

“This feels like a grey area,” said one man in our class discussion. “She had said yes, though,” said someone else. Another man said he felt bad for one of the boy’s families, that their lives would be ruined too. My friends and I sent each other expletive-filled texts from across the room, said all the things we knew were right, but what stuck with me was the confusion surrounding something I found to be straightforward, pitch black, not grey. How can one defend or prosecute, play judge or jury, when he does not fundamentally understand?

Later, when I went to my professor’s office hours and remarked on the tone of the class, she said, “it’s tough to give a lecture where half the women in the class are on the brink of tears and half the men are looking away.”

I go to more dances as a teenager. I grind some more, although I am not asked if I want to or not. I am not given the chance to say no. But I don’t want to. I am part of this contract, this clammy, Axe body-spray-reeking contract, and I hold it in esteem. To be picked, to be wanted, to be made to feel important— is this not why our pulses beat? For what other reason do human relationships exist?

As a girl, to become a woman, I was taught that my body is a gun. To show it only to those I trust. To polish it, to present it. To be careful with the trigger.

At school dances, I pushed limits with my body. Who could hold it, who could touch it, for how long. I never saw their faces, and yet, these faceless boys taught me my own power. The lure of the gun.

With time, I discovered that the gun is loaded, but this is something no one could teach me. My parents wanted to protect me, and tried to give me the tools to protect myself, but here’s the thing with a loaded gun: it’s dangerous.

And one terrible night when I was 19 years old, someone stole the gun. He was neither the first nor the last of his kind, to weaponize what was not his to shoot. A space invader can become a gunslinger quickly.

I don’t want to look at my 14-year-old self and tell her not to trust men. That is too absolute, and too untrue. I want to tell her to trust herself more. To trust that she does not need a pubescent boy’s semi- hard penis grinding into her ass as an indicator of her self-worth.

What an odd thing we did, at 14. A social experiment of a dark room, a few hundred adolescents and some eponymous Pitbull track, and they choose to hump in the black.

With time, we, the taken, learn to take. To take our bodies for granted. To take caution. To not drink too much, to let ourselves too loose. We take Ubers in pairs. We take our space seriously.

I did not learn whatever lesson my father wanted me to. Instead, I learned something else: I am done giving, for a while. Stand too close to me in a line. Hold me close without my permission. Take more than I want to give. I dare you.