The Rule of Tincture: A Review of Emily Wilson’s The Great Medieval Yellows 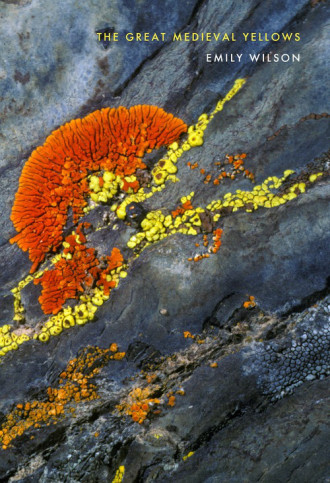 Time was colour could not be placed upon colour, nor metal on metal. Or metal should not be placed upon metal, nor colour colour. Some would even say no fur upon fur. As though by royal decree or divine right they could keep the alchemists at bay, their feudal class structure in place, and even the animals discretely skinned—one thing should never turn into another. This rule is perhaps the most basic principle of heraldry, generally formulated as above though some doubt persists as to the order of constituent parts. A system, or at least something systemic, that by the time of Edward II was codified so that we might & often do call it a science. The shield (escutcheon) into which arms are set is designated the field, administering all possible dimensions within which to blazon geometric ordinaries & figurative charges. But no silver chevron shall cut a gold field, no red hawk may fly in blue. These demarcations & the rule of tincture culminate in a kind of lexical calculus to assert a particular heraldic design; components & their hues, environs, & postures. Say azure, a cross florry or for a blue shield with gold floral cross; gules, a lion rampant cotourné or as Richard I’s red shield & gold lion rearing in profile.

It is clear that Emily Wilson’s collection of poems The Great Medieval Yellows (Canarium, 2015) has more in mind the pigments of early painting than heraldic tinctures; the text’s epigraph spelling out those minerals & cuttings that would be mixed first into egg tempera, and later oil paints to spawn spectrums of gold. Particularly coiled in the saffron, buckthorn, and weld varieties, this book might be understood as an herbarium (c.f. ‘herbier’). Just as the bestiaries of illuminated manuscripts cart us through stylised realms of creatures at once known, unknown, and known-made-strange, The Great Medieval Yellows strikes out into the self-welding bramble, twisting through a gothic architecture perhaps first at the resolution of underbrush, but then perhaps also the entirety of dusk. An “illuminated “I”” who “pedals its gold kerns” (‘model hand’) charts the mechanics from grotesque germination of seeds right through to putrescent fruit bloom. The Voynich Manuscript looms with vines & thorns we cannot quite seem to remember, as sunflower becomes “the forb in wielding / what it wields” (‘hibernal’); the grasslands militarised, the opaque potency of older names both Latin & Saxon as a language resistant.

“Forbiddingly in / its primal vasculature”
—‘metalmark’

This is not to say that I’m already to give up on the rule of tincture. McKenzie Wark: “Impressionism, for example, was among other things exploring the possibilities of new kinds of industrially produced pigments. Modern chemistry was really changing the substance of our world at the molecular level. One expression of that is the experiments conducted by artists with those materials.” Young certainly seems all too well acquainted with the prevalence-cum-virulence of chemical processes, whether we are considering plants consuming minerals as they snake towards life, or the market forces of our cultural technologies: “the metaphorical / fund we would be chemically / composed in” (‘saccade’). Orpiment, one of the eponymous yellows, is a seething arsenic sulphide compound beneath its clear-bright implementation. Gules, the term for the red heraldic tincture, derives from Old French goules (c.f. gullet), and likely has its metaphorical origin in the slit throats of animals: “White throated sparrow / throating out” (‘hibernal’); “bright green piping from / the “throat,” “gut” where still / some question drives” (‘mezzotint’); “Ivory under-throats just / rust violet” (‘eidolon’). Argent, two zones strident vert.

As well the “aster wields” its colours, “taupe-and-salmon” (‘big technical’), the rarest of all tinctures used in heraldry, and both the organs of “vasculature” and the “sussed buds” ready to outwardly flourish too are subject to the “sheath” of weaponry (‘metalmark’). Gules, debris failed sable. Birds fly sorties in a “soldier-colored” town (‘parliament of birds’); “starling” and “trunk” engage in “semaphore” (‘mappa mundi’). As if to unite the chemical & herald, something bristles “on azurite” material, “substance the “carrier”” (‘heroic pigments’), announcing our standard bearer of lurid contagion. This flag, stitched from the caloplaca and acarospora lichens that adorn the codex’s cover, smouldering on bark as if the “cedar discloses” in “rusts & browns” (‘the garden’). Ermines, six grubs clung palewise gules. Vair or and vert, slugs mimicking stone argent. Heraldry is essentially a mannerist art, one that is all about placement; one that couldn’t help but worry where to fix imaginary annelids “if not in the comic / Near-embrace of the black lacquered scorpion” (‘exhibition’). Blazoned motifs are pigeonholed by their relative coordinates in-field; may be found dexter or sinister, abaissé or proper, in stances rampant or passant. In brandishing “strident radiation” (‘hibernal’) we are exiled from the possibility of any simple pastoral landscape, reminded that the symbols blasted into our decaying contemporary arms are more likely to be lethal doses of gamma rays, or Chernobyl’s reactor, than regal beasts. We encounter “asymmetrical renderings” of parts both worldly (“rivers,” “dumps”) and corporal (“bones,” “vesicles”), which perhaps port well to the personal & geopolitical duality inherent in heraldic designs. Or, at the very least, it is hard at such an hour to read a poem titled ‘mappa mundi’ without considering the customary crests & adornments of imperialism’s roadmaps.

We are even treated to the favoured blue of Alice Roosevelt. Or, bramble tracking blood-orange sanguine. Argent and or lozengy, the double peony doubling still purpure & vert. Certainly we are doused in the language of colour, “in the language of / orange areoles” (‘lichen association’), ripe to be set alight.

It is not without trepidation that I invoke antiquated theorems of such patriarchal violence to systematise poetry written by a woman in 2015, not least when Crusading invasions of the Middle East played no small part in crystallising the apparatus at hand. Arms discordant to the rule of tincture are called illegitimate (and certain icons—the baton, no less—reserved for illegitimate sons, as if in disciplinary fear of a promiscuity that can only ever be the fault of woman), decried by stuffy little handbooks of heraldry as perversions or debasements, not innovations on which to found a precedence.

But here Emily Wilson is perhaps the alchemist I first warned about a little too gleefully; one truly in that element, & not merely as hackneyed metaphor. The herald of a contemporary pastoral occult for fields cursed by Roundup fertilisers, slavishly addicted to GMO seeds: “spiked colonies under / the peonies” (‘buds’). Our place and space at once junkie careening doomwards, steroidal Superman, & incomprehensible Shaman reaching into the deep. But what all these characters have in common is that they are delightfully dangerously prolific, whatever their means and modes. In going against the grain there is a decadence at play; a disposition of the “wastrel carnation” (‘the model hand’), where “the garden tends / into its own / untending” (‘the garden’) quite in recollection of Sucre’s afternoons submerged in the shadows of a lethal garden, hand-sewing paper flowers to the very bark of trees. Plants become gaudy as their artifice—always already present in some nameless degree—metastasises; as they surface from their once buried condition so often for nothing other than vibrant displays of venom: the “bald and blossoming / dark incendiary course” (‘fondo d’oro’).

In true fashion of second nature, the concern is with an art though one “terribly … arched off from” (‘heroic pigments’), one that is “undue” (‘flame hall’), or at least unstable & distasteful: “flagrant yellow-greens against that too intense blue” (‘little fantasy’). Heraldry is likely one of our oldest designs of death; a true art of war. Even this landscape’s butterflies—“crude spots … furling wings” (‘metalmark’) recalling the webbed ermine fur pattern—are sharp & bladelike, to say nothing of their occult sexualities of pollination & metamorphosis. Blazoned in all-pervasive excess, Wilson’s charges proliferate as contemporary gothic hybrids of plant & tech, completely natural in their violence as the very idea of nature dissolves around them: “wedged with art / hot at the crosses” (‘metalmark’) & under the collar, leaving us frightfully unsure of our methods.

Chris Holdaway is a poet/editor from New Zealand, where he directs Compound Press. He is the author of HIGH-TENSION/FASHION (Greying Ghost, 2017). Recent work in Cream City Review, The Seattle Review, & Southerly Journal.