The Revolution Will Not Be Filmed 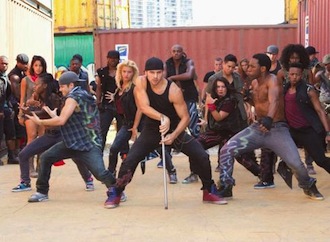 O! The agony, to come upon this treasure robbed of its primary thrust. Recently I found myself the impeded and unceremonious spectator to what, in its intended environs, must have assuredly been the cinematic spectacle of the year. Instead, no, I streamed the poor thing from an iPad, totally the incorrect context for the sparkling three-dimensional jewel that is Step Up: Revolution (just out on DVD and Blu Ray). Now, I’ll admit up front a complete ignorance to the three titles that prefigure this present choreographic Revolution. Yes, the first title in this unlikely lineage featured Channing Tatum, but that was nearly seven years ago and since then, Step Up has been a franchise based solely upon motor skills and quite commercial filmmaking styles. Perhaps it’s precisely my illiteracy of that legacy that made for the dumbfounded and rapt jouissance stirred by this exemplary fourth installment. It takes installments, after all, to get the basics of such an organism whittled down to its most essential elements.

And Revolution is the type of breathless genre film that comes around but once in a blue moon (Charlie’s Angels: Full Throttle and Transporter 2 spring readily to mind), bouncing with the same type of guileless self-assurance as our protagonists’ glutes. This is cinema’s sensational origin at its most primal. See, scholar Tom Gunning wrote, not too long ago, about cinema’s first impulse, as a circus-like rendering of spectacle, a trick, existing outside of a narrative pull––“The Cinema of Attractions,” he called it. That initial modus operandi of the cinema waned as narrative conventions became tantamount (we’re talking around 1906 and in the films of D.W. Griffith and such), saving the attractions for fleeting moments, minor digressions within a narrative flow, as can be glimpsed in musicals, avant-garde film or dance movies, as the current case may be.

Well, as the cars shift into gear for Revolution’s astoundingly infectious and impressively bombastic opening flash mob sequence, years of narrative delicacy and nuance evaporate along with our dance crews hoodies, laying bare the celluloid musculature of pure, unadulterated spectacle. It’s a sweet and intoxicating thing, staring wide-eyed into this sensuous bounce, an oozingly aesthetic Miami miasma, teeming while pop-cultural crazes conglomerate upon the dexterous and convulsing bodies which writhe to pirated DJ dubstep breakdowns, jacked up, five feet in the air, on the hoods of hydraulic hopping hotrods. Oh the film has a plot, but no one’s asking. It involves something so banal, about some Youtube competition for viewer hits that seems terrifically idealistic to anyone who has spent more than five minutes on the site (as anyone who would watch a movie called Step Up: Revolution assuredly would have). And then it becomes somewhat political, when the local members of said flash mob begin flashing their skills to prevent gentrification in their neighborhood by way of an evil developer (Peter Gallagher, the film’s only recognizable face).

Revolution succeeds in coming off both hyperbolic––thanks to the Miami environs, a candy-colored production palette and the metallic 3D cinematography––and somehow indexical, aping conventions like skater video clips and youtube documentation, pushing the rigorous dance moves and choreographic motion capture conventions into a woozy blend of dance document and fantasy. As such, the film achieves a tricky pitch, maintaining the legacy that is dance in film (spanning all of cinematic history, really), and reinstating that lineage within the contemporary youth market, who could just as easily be playing the interactive gaming sensation, Dance Dance Revolution. It takes bells and whistles like 3D to get there, and much like the above mentioned Angels sequel, Revolution was not exactly a successful evolution in the franchise. But oh is it a thrilling ride. Me, I’ve never been a huge fan of dance in the cinema, but I am a sucker for the swagger that a thoroughly convicted attraction-based flick can muster, once it sheds all claims toward the decency of dominant filmmaking practices (compelling story lines, dynamic dialogue––basically, you know, modernist forward-moving causal conventions) and showers in the specificity and confident utilitarianism that is cinematic spectacle. This can lead to train wrecks, sure, but the bodies that hustle and flow through Step Up: Revolution are not trains. They are pistons sure, but they keep that old Kino alive in a very specific and enticing way, soliciting countless “oohs” and “ahhs” from me when I indulged. And, dear reader, perhaps also from you.