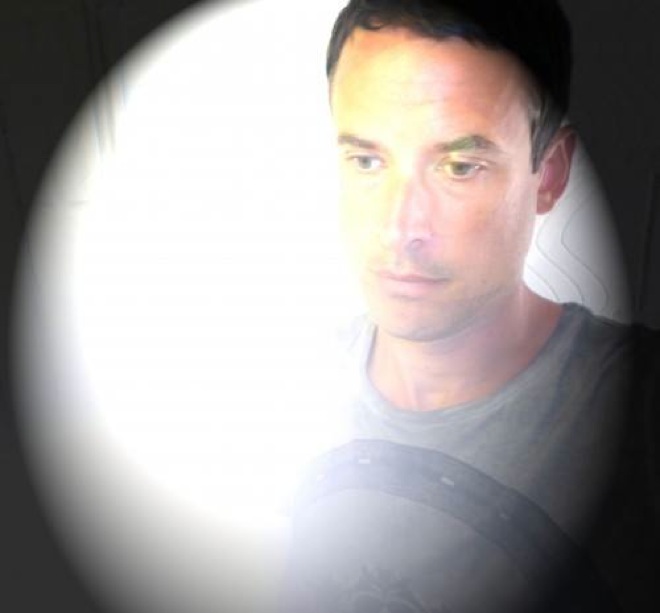 The PDF I have for Gary J. Shipley’s novel Crypt(o)spasm is 749 pages long. On page 409, the story—as it is—comes to an abrupt end, cutting out in the middle of a sentence. “Well . . . in spite of my now enfeebled dread relinquishing its stranglehold on my wrung-out days, and the hollow nose bone of metaphysics whistling airless strains for my emptied space, I’m forced to conclude that . . .” And then the page goes blank.

Flip to the next page—it’s blank too. Page 411 is solid black and contains only this quote from H. G. Wells: “If his thinking has been sound, then the world is at the end of its tether. The end of everything we call life is close at hand and cannot be evaded.” It’s here, on this black page, when Crypt(o)spasm transforms from a book that’s meant to be read into a book that tells you what it really is, transmission into transmitter.

The next page starts the book over at the beginning, repeating its first sentence, its second, third—only everything is different now. The formatting of the text has been mangled. Lines are broken into irregular patterns. Whole sentences are blacked out. Some words are huge; others are tiny, as if trying to hide from view. It doesn’t take long to figure out that the larger words, the words towering above the text, are connected. It’s a headache-y moment, coming to realize that the text you’ve just spent days or weeks or months reading contains a secret message. 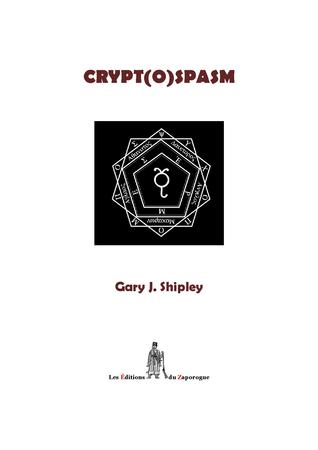 I first heard of Shipley when an anonymous acquaintance, someone who operates online under the moniker of “gnome,” sent me an email asking me if I’d read his work. A Google search brought me to a poem titled “Fly Glaze Horse” published in >kill author. I was hooked.

Mocking John Durban, the editor of a series of books designed to make Shakespeare digestible to casual readers, Slavoj Žižek once said “Durband tries to formulate directly, in everyday locution, (what he considers to be) the thought expressed in Shakespeare’s metaphoric idiom—‘To be or not to be, that is the question’ becomes something like: ‘What’s bother me now is: Shall I kill myself or not?’”

I emailed Shipley in preparation of writing this article and asked him to describe his book. I was feeling lazy, like I was unprepared to say anything of value on a book I wasn’t quite sure I’d even understood. It was more than that, though. I wanted to learn more. I felt like reading Shipley’s work was getting me closer to something inside myself. He wrote back: “Crypt(o)spasm explores the idea of the novel as an impossible object. Its themes are myriad and drunken, sprawling and wretched and philosophic—and then the inescapable synonymy of the final two. It gives us death as it takes it away. And there are herds and there are individuals: zeros piled up end on end on top of zeros. Questions are asked of men living out their own thought experiments. Answers are lived in consecutive intervals sucked of death while framed in its disappearance. A coded message is hidden and then revealed. Others are buried, their insides clogged, and they are not found. The book is ill with itself.”

I don’t know how to write about Crypt(o)spasm without boiling it down to platitudes like “Shall I kill myself or not?” In the world Shipley has created there is government-enforced immortality. The year is 2610. There is a coastal town, Pavilionstone—the crypt—a place where men and women are allowed to die. Shipley: “While the rest of the world endures enforced immortality, this shitty little seaside town flails like a poisoned mutt, and there we have the spasm. But the spasm not only refers to the place of death, but to the hidden (crypto) convulsion, all the many secret and automatic devices employed to misplace the truth of your situation.” In this town there is a man named Charles, a writer—perhaps the writer—who is introduced as a fat, bald-headed failure. Is Crypt(o)spasm Charles’s work? Is it filled with messages to readers beyond the walls of Pavilionstone? Or perhaps messages to himself that we, through whatever means, have become privy to?

Originally published in 2012 by Les Editions du Zaporogoue, Crypt(o)spasm will soon be republished by Brooklyn-based punctum books, who also published Gary’s excellent chapbook The Suicide of Conrad Unger. Although Crypt(o)spasm is the first fictional book-length work Shipley produced—he started working on it twelve years ago—it was not his first to find publication. An early excerpt was published in 3:AM, which led to long string of publications in other magazines such as The Black Herald, elimae, New Dead Families, and Gargoyle, among many others. More books emerged, among them: Theoretical Animals (BlazeVOX); Necrology (gobbet press), written with Kenji Siratori, which I’ve also written about here; Flavored Apocalypse (Strange Cage), written with RC Miller; Hum Kong Millipede (Dynatox Ministries); and most recently, Dreams of Amputation (Copeland Valley).

Although the list of his fiction and poetry publications is vast, Shipley’s writing is ultimately rooted in his studies of philosophy. Before beginning Crypt(o)spasm, he published an excerpt from his dissertation in the journal Analysis. When I asked him about his background, Gary responded, “Although the distinction is by no means unequivocal, I started off very much in the analytic camp, but have since cultivated just as much interest in the continental and theory side of philosophy, my stylistic concentrations having mutated along the way. I guess everything I write comes from a place of what you might call philosophical confusion: paradoxes, seemingly unavoidable dead-ends of thought, intellectual contrivances, the physical potential of the abstract, intractable lacunas, and all of it growing steadily murkier—which is also, every now and then, those same things becoming clearer.”

This concept of “philosophical confusion” is key to understanding Crypt(o)spasm. Getting lost is part of the process. Like the best kinds of art, Shipley’s writing forces those who are brave enough to take it in to question the unknown, the discomfiting, and the grotesque.

The opening sentences of Crypt(o)spasm: “There are days when I can’t bear to write, when I can’t bear even to think of the ridiculousness of writing as being the reason why I choose not to. It’s on these days that my flat is my enemy: all those fucking books, all those bound words covering my walls and cluttering my floors like the infectious growths of some grisly disease.”

Shipley: “The coast is old, feckless, and dying. The coast is falling into the sea. Its legs have varicose veins and crumbling bones. Its mouth is a grave. There are no teeth left to bite the world. Self-delusion is the only essential art. And there becomes an author—literary snide, paranoid, arsehole, xenophobe, visionary, puissant pissant—and the book is his, and he is eaten up with the words he’s borrowed. And there’s a man whose wife is dead and living inside another woman. And all this to make sense of evil and literature—and literature as evil—as two philosophers squabble over a self they each made from incompatible materials, and murderers murder, and animals suffer (cats and dogs and birds coiled up inside each other like barbed wire), and children die more than once. And there is something to be done, instructions to be carried out, a hole to find and crawl into and through and out the other side, which is the same side, which is no side at all.”

Despite its repeating structure, Crypt(o)spasm is similar to Joyce’s Ulysses in the sense that it contorts and constricts itself through a myriad of historical and experimental styles, seemingly finding use for every literary technique this side of the grave. The text is littered with references to, quotations and excerpts from Trakl, Borges, Ahkmatova, Sartre, Descartes, Kafka, and many others—all of those names are taken from the first 100 pages alone. And like Ulysses, Crypt(o)spasm is a book very much concerned with its place in the continuum of these figures—these “infectious growths of some grisly disease”—a book as much about the writing of a book as it is a book written.

Shipley: “I wanted Charles to be hiding more than his hundreds of Nabokovian plums; I wanted him to be encrypting a secret message (one secret even to himself), away from all those prying eyes, a message that would guide him, act as prompt and voice when his own had deserted him. I wanted to open up another opportunity for the book to exist as pretence, its only being there to hide this voice, this coded message.”

Like an awful Ouroboros, I’ve come back to where I began, with codes, secret messages. Hidden convulsions and acts of violence behind closed doors. Why is it that I still believe a text can get me closer to myself? What is it that I’m searching for?

Upon first reading past page 411, I couldn’t wrap my head around whether or not Shipley had bloomed the entire book from the encoded messages, or whether he’d been able to uncover them himself from what was written—or how much of it was from Charles to the reader, or Shipley to Charles, or Charles to Charles. The idea is something I could easily find myself obsessed with. Touching on this, Shipley wrote me, “. . . the parenthetical ‘o’ provides an opening back into the text, a start and a revisiting, continuing the tunnel discovered in the closing pages—establishing the loop, the eternal return, and thereby the importance of lacunas, hidden things, the perpetually undisclosed. There’s also the significance of the completed loop of the ‘o’ that is bounded by the incomplete circle of the parentheses: the zero inside its incomplete shell.”

And so here it is, then, the entrance back to the beginning. An invitation, really. Like the famously cracked ending of Samuel Delany’s Dhalgren, the text of Crypt(o)spasm can be seen to function as a Möbius strip, a taunt, or perhaps even an apology. The answers to be found will also be in flux, “the perpetually undisclosed.” This book was not written for the impatient, the easily distracted. Rather, it is a book intended for the bravest of readers. And for that reason alone, like those poor souls living beyond the crypt who cannot die, it will surely stand the test of time.