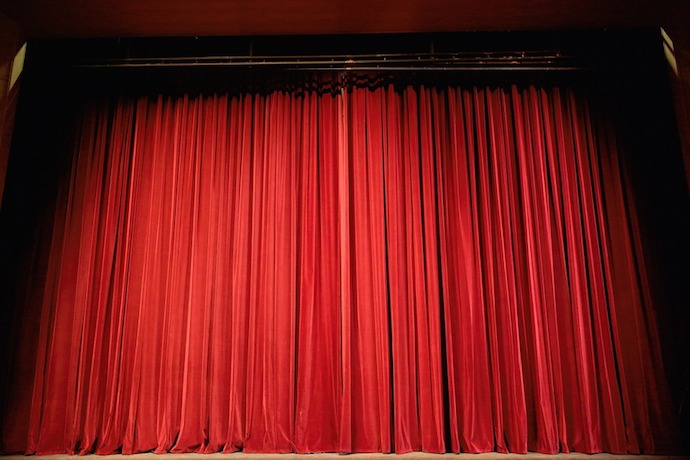 Her husband’s ex had built a career on saying terrible things about people. It surprised her when, out of the blue, he expressed interest in attending the ex’s performance at a local community center. The community center was the kind of venue where the audience could arrange themselves any way they pleased. On this particular night, everyone was lying down with blankets covering their bodies up to the neck. It reminded her of kindergarten class, when each child had slept on their own tiny rug with their own tiny blanket, protected within their own quiet dream.

She and her husband lay in the front row.

When his ex walked onto the stage, she felt herself getting anxious. The ex was wearing her quintessential green dress and her shiny hair was cropped neatly at her earlobes. She seemed to flicker when she saw them, but carried on affixing a map to the wall as if she had not.

The map was a topographical representation of the city in which they lived, except its streets and landmarks were named after people they knew. It was not possible to discern each name from such a distance, but she knew it when she recognized the shape of her husband’s. Two pipes ran along the main thoroughfares, which cut through the center of the map. At the end of each pipe was a tiny faucet. The ex turned the faucets, releasing diarrhea and vomit through the city and onto the wood floor. She recited the names as the liquids pooled and ran along a crack.

The audience started moving around.

Her husband, who at first had rolled his eyes, was laughing.

In a succession of moments she recognized as neither dream nor thought, her husband’s ex walked off the stage and lay beside him.

She heard herself say, “I’ll break every bone in your body,” yet nothing about the following moment told her whether she had articulated this, or thought it.

“This is how things were always going to go,” she thought she heard her husband say. Then, she realized it didn’t matter; their thoughts communicated whether she liked it or not.

On their way home, she insisted they stop at a rare public bathroom. Designed by a group of experimental architects in the 1930s, it was among her favorite places in the city. Its unwieldy aesthetic had opened it to vagrants who’d imbued it with profound foulness. But perhaps its most challenging feature was that its entrance and exit were mazes. Her husband, who suffered from claustrophobia, hated mazes.

She told him she needed to go in to pee.

“Can’t you pee in the bushes?”

They both knew this was not an option.

They stepped through the maze together; him sweating and squeezing her hand. When they reached the tiled vestibule with its broken sinks, her foot scarcely missed a rat curled into fetal position, maggots squirming from a hole in its belly. Before her husband could ask to join her inside the stall, she released his hand and locked the door. She stood before the toilet in the same place her feet would be if she were sitting. Of course, she would never pee in such a place. She pulled her shirt over her nose and held her breath. She heard her husband’s voice, infused by the high pitch of adrenaline, “sweetie, where are you?” several times before she unlocked the door.