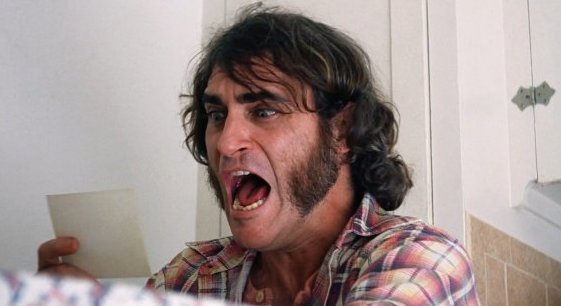 About halfway through Paul Thomas Anderson’s Inherent Vice, his seventh feature and the first proper adaptation of a Thomas Pynchon novel, we’re in a crummy waterfront dive bar watching Joaquin Phoenix’s perpetually spacing-or-freaking-out private investigator Larry “Doc” Sportello press his lawyer, Sauncho Smilax, who happens to specialize in Marine law, for the whispered details surrounding a shape-shifting plot element known as The Golden Fang, which at this particular moment is definitely an enigmatic and probably government-owned schooner with mysterious cargo, but which also might be an Indochinese heroin cartel whose money is laundered through a prostitution parlor called Chick Planet Massage, or it could be a tax evasion service set up by a syndicate of crooked dentists whose offices are located inside a giant, golden, fang-shaped building.

“She’s not just a boat, Doc,” warns Sauncho, comically underplayed by Benicio Del Toro. “She’s much more than that.” Which, though intriguing, leaves both Doc and the audience none the wiser. Which, depending on how deeply you’re inhaling, might not really matter.

While Anderson’s film, set in a fictional 1970 California surf town called Gordita Beach, shares more with Robert Altman’s The Long Goodbye and—if for no other reason than its goofy tone and chronically stoned protagonist—The Big Lebowski than it does with classic Chandler- or Hammett-penned detective movies, there are still plenty of those ingredients on display: characters presumed dead appear out of the fog like apparitions; mysterious notes are exchanged which recall a memory or advise precaution; collisions, both physical and emotional, occur between a (usually fucked-up but sometimes on-point) private investigator with good intentions and a convoluted plot line whose intricacies Anderson hasn’t necessarily made his number one priority. And the film is better for all of that; once again in a PTA film, it’s the emotional needs of the characters that seem to drive the plot, and not vice versa.

That plot, just to get it out there: Doc’s ex-girlfriend Shasta Fay Hepworth (Katherine Waterson) visits him out of the blue one night to ask for his help. She’s having an affair with real estate tycoon Mickey Wolfmann (Eric Roberts, doing a fine job in his brief two minutes on screen), whose wife Sloane and her boyfriend may or may not be planning to have him (Mickey) kidnapped in order to steal his money. After Doc puts bitterness and jealousy aside to help Shasta, who herself goes missing shortly thereafter, he of course becomes entangled in a bizarre, loosely-connected web of characters, organizations, secrets and motives, which include an ex-heroin addict/surf saxophone player named Coy Harlington (Owen Wilson) (who has faked his own death to save his wife and daughter from a life of pain and addiction); a corrupt pedophile dentist (hilariously played by Martin Short) who dies mysteriously on a trampoline; a flat-topped, fun-wrecking police lieutenant named Christian “Bigfoot” Bjornsen (Josh Brolin, nailing it scene after scene) whose own involvement might be driven by the need to avenge his murdered partner; and a looney-bin worth of recovering addicts where FBI agents are hiding Mickey Wolfmann until he recovers from the recent discovery of his own conscience. And of course The Golden Fang.

“Dentists on trampolines,” mutters Bigfoot, while shoveling in Japanese pancakes. “God help us all.”

Yet, thankfully, Anderson seems to have pushed the performances, not to mention some typically fluid and gorgeous cinematography, to front and center, and the results are mostly fantastic. Phoenix’s scrappy, sandals-clad, self medicated detective, who somehow manages to seem simultaneously hopeless and capable as each scene dissolves hypnotically into the next, is endlessly watchable. His zoned out reactions to the strange and disturbing things he sees and hears are priceless (watch him watching Bigfoot eat a chocolate banana and try not to laugh out loud). Though sometimes sex, drugs, and maybe a pizza are motive enough, anybody can see he’s driven by emotion, especially any affiliated with Shasta Fay. Shasta’s two major scenes, which bookend the primary plot line, are raw and slow-paced, almost meandering, and they represent Inherent Vice at its most playful and relaxed. That Anderson has let his actors remain loose and experimental in a genre whose characters have always been somewhat confined to type—the strident, internalizing, emotionally vague male detective; the seductive, sometimes dangerous but usually vulnerable female object of beauty; the disposable and one-dimensionally sinister villains—is a not a breath but whole zeppelin of fresh air, and following the gorgeously difficult opacity of The Master, with its ocean-sized themes still digesting years after its release, it’s only natural that Inherent Vice should feel more breezy and fun.

Not that marijuana smoke is the only thing hovering in the air, though; even a film as relaxed and trimmed-of-fat as Anderson’s can’t avoid some of Pynchon’s thematic suggestions. In the world of the film the Manson arrests have lead to mass paranoia—especially among the police force—about cultish activities, and their disgust for “drug crazed hippies” is not subtle. The government-funded anti-subversive group Vigilant California, somehow linked to both the Nixon Administration and the FBI (not to mention The Golden Fang), seems to represent the actual, pre-meditated death of late 60’s counter-culture. Less obvious, though, are the themes of lost love, of missing somebody, of death and our insulation from accepting it. Doc is longing for Shasta and the times they shared while Coy is longing for his wife and daughter. Bigfoot mourns silently for his dead partner. Even Mickey Wolfmann betrays a sense of loss in his short exchange with Doc, possibly for the kind of person he could have been instead of the person he’s only lately realized he is.

Whereas the novel feels more focused on end-of-an-era cultural commentary, the emotional undercurrent seems, not surprisingly, to be the focus of Anderson’s experiment, and to where he has pointed his actors. Brolin’s Bigfoot, though sulking and manipulating, never feels villainous, and it’s striking how often it seemed like he was trying to connect with Doc despite his open disdain for the hippie lifestyle. Doc himself is driven by an emotional need to help/find/love Shasta and to reunite Coy Harlington with his family. A small but beautiful example: as he’s leaving Hope Harlington’s house after stopping in to investigate her husband’s disappearance, she offers—and he accepts, openly and naturally—a warm hug, which: count the number of times you’ve watched a PI hug a client after their first meeting.

Most striking is Anderson’s decision to elevate Joanna Newsom’s Sortilege, an ethereal presence and seer of sorts, and a fringe character in the novel, into the role of narrator and, by extension, the translator of Doc’s ongoing perplexity. During Doc’s scenes with her, the psychedelic mystery pauses for a breather and he’s able to lay it out there and try to examine what the fuck is happening. After the Shasta/Mickey Woflmann plot has run its course, Doc’s still troubled, and it’s Sortilege who gently encourages him to look inward for what has yet to be resolved.

“Little kid blues,” he decides, unable to forget about Coy’s estrangement from his family. This is what makes Phoenix’s Doc so memorable and real, and what makes the movie richer than the sum of its many zany and off-kilter parts; flowing quietly underneath what could have been a easy laugh-grab for a lesser actor (or a slick style-piece for a lesser director) is the same megadose of humanity most of us have come to associate with and expect from Anderson’s consistently masterful filmmaking.