THE LAST NOSTALGIA: A REVIEW OF BECCA KLAVER’S EMPIRE WASTED 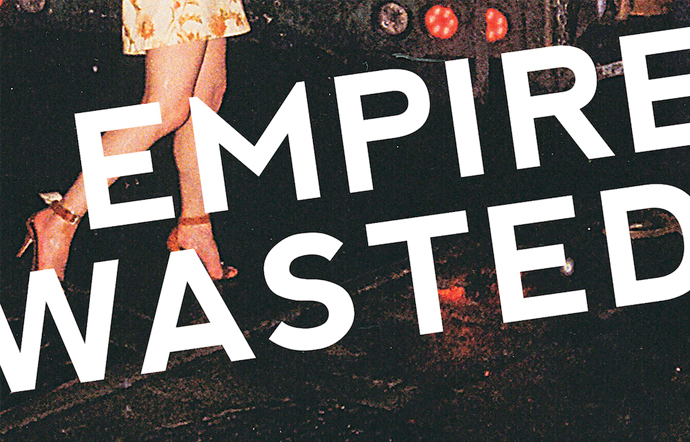 It is unsettling, to say the least, that Becca Klaver’s Empire Wasted is the latest full-length collection to be released by small press stalwart Bloof Books. That’s no fault of Bloof, of course. The book would still be evocative if the outcome of the recent election hadn’t been so horrifying to so many of us. Now, the book takes on a heavier weight, one that acts as an anchor on the heart and asks us to examine what our distinctly American empire has become. Klaver takes readers on a trip through social media, around a corner full of poets her poems converse with, followed by a trip to New York. Empire Wasted is a black comedy for this new age we find ourselves in, and like the best comedy, it’s funny because it’s true. It’s sad because it’s real. As Klaver warns us in an epigraph taken from Frank O’Hara: “Ladies, we are going through hell.”

Empire Wasted is divided into five sections, each section connected to the other because they are all parts of the same empire. The first section, “Death & Disaster Series,” is self-explanatory. “‘We Got Him’” is a found poem in this section comprised “as-is from social media and contains lines from Allen Ginsberg ‘America’ and Robert Hayden’s ‘American Journal,’ as they appeared on social media” (111). Some darkly comic lines from this poem include:

Knows Osama Bin Laden would still be alive if he hadn’t crawled out of his cave to take advantage of Pizza Hut’s NEW Ultimate Cheese Lover’s™ pizza special. Fuck the world.

I thought Chuck Norris killed Osama before he was even born

The pledge of allegiance was a nice touch. but WWFS? (What would Foucault say?) (14-15)

Klaver appropriates found text to great effect in this poem and in “Derailed” a few poems later in this section. But perhaps the most stunning sentiment comes in “Happy Birthday USA” where she writes (and readers might be feeling): “If we’re fucked then fuck us till it’s over” (25).

“Liberty in the Basement Light,” the second section, moves from the world of social media to New York, and in spots shimmers with hope. Klaver embraces the New York School with some lovely slice-of-life poems in the style of Frank O’ Hara (“Poem,” which has my new favorite Silver Jews reference, “Frank O’Hara by Alice Neel,” and “Across from Clark Street Station”). Also in this section comes “The New York Miracle,” a poem that helps tamper the horror from the first section. It reads, in its entirety:

in spite of all

The form of this poem is in a happy marriage with its content: the staccato lines / stanzas do feel like stopping, but the poem continues, it trudges through the snow of white space to a hopeful ending, just like its readers have to out in the world.

Section three, “Decade Zero,” is a long poem that evokes, for this reader, a mix of emotions about the ‘90s. The speaker of the poem seems simultaneously to lament not being able to enjoy the ‘90s when they were happening and feels uneasy about celebrating that time in “[a] decade of zeroes / [that] we never gave […] a name” (55). The “we” in the second line of the poem implies, I think, a generation of young people, people who saw “our favorite bands / [come] out from hiding” and “were broke for years / no supermarket to walk to,” but also

were playing
decade trivia
which wasn’t a bar game
but an obsessive
compulsion (56, 61, 71)

Yes, poems are works of fiction, but Klaver’s lines ring true here, maybe now more than ever. The last three pages of “Decade Zero” consist of couplets stacked on top of each other with the repeated first line, “The 90s will be the last nostalgia” (73-75). The last line of the poem reads: “We’re done feeling that way” (75). I think the speaker is trying to convince us that “we” are done feeling nostalgic for the ‘90s, but I don’t believe her. The ‘90s are the new “good old days” for the generation of this poem.

“Popular Record” follows “Decade Zero” and swings back around to popular culture. One poem documents the night before digital TV (“On the night before TV goes digital”), another is a sort- of-not-exactly ode to Leonardo DiCaprio (“Leo as Gatsby”), and another acts as an echo to the found poems in the first section (“B®AND ROYALTY”). Also, like the first section, there are somber moments. Klaver is never too far out from alienation’s orbit, as evoked in “BOGO”:

fall back on some pioneering
sticktoitiveness

buy one get one
but I dunno

who likes getting lost in the woods

grind down your heels
in the here-now available dirt (87)

The clever line and stanza break(s) in stanza three and four offer three avenues for being lost: “but I dunno,” “but I dunno // anybody,” and “but I dunno // anybody / who likes getting lost in the woods” adds even more weight to a collection that (by this point if you read straight through), already is heavy on the heart. There is so much gravity at work here, there’s no choice but to “grind down your heels.”

“Revolutionary Letters” rounds out Empire Wasted and is perhaps the most somber section therein. Many of the poems in this section read as bearing witness to the surveillance state in which we now live. The first line of the first poem here, “A Knock at the Door,” nevermind the images the title triggers, reads: “What can I come home to tell you” (95). What can this speaker say that we don’t know already? How does one put into words that which defies them? This same speaker says, “I knew a smallness and a smallness would not stick” and “I’ve come to tell you if we’re all being watched anyway / Then there will be a record of this” (95). But is a record enough? And even if it is, will the record ever be seen or will it be lost?

Klaver offers some hope though. In “The Machine Does End” the speaker says, “you may not train your spyglass / on my dreams” (100). In “Administered,” the speaker, along with the “podded masses,”

In the end, Empire Wasted is a collection about the failed and oppressive machinery of the American empire (government, popular culture, social media) as much as it is about the people who feel powerless under it. Everyone and everything is wasted. Klaver does show us glimmers of the dream outside of the empire, but it’s buried deep. It feels true to the world as we woke up to it on November 9th, a world we didn’t see spinning backwards. Klaver shows we can’t afford to get wasted though. We must trudge along.