The Heavy Fucking Sky: A conversation with Thomas Moore

The Night Is An Empire
Thomas Moore
Kiddiepunk
70 pp

I’ve been a fan of Thomas Moore’s work since I read his poetry collection Hospital. Having said that, I was ill-prepared for how blown away I would be by his stunning new collection of poems, The Night Is An Empire. The thing is a tour de force. The pieces are shaped like emotional wrecks, like black forests and abandoned factories. They’re shaped like punches in the face. I found myself stunned by how Moore demonstrates shifting currents of desire, remorse, self-hatred, and yearning intersecting in between lines of text that themselves fail to bear the burden of the secrets that the characters demand that they keep. In the world that Moore created, memories are ghosts and absence is just a type of wavering presence. The Night Is An Empire overwhelmed me in all the myriad ways it, itself, is overwhelmed.

FANZINE:  This book is riddled with language referring to language failing. I see this strident inarticulateness as a strategy for the voice(s) in the text(s) to be as articulate as possible, to be as articulate as their circumstance (external and internal, mental and physical) allow. I guess I mean I see it as a sort of show of strength in the face of all the disparate adversity they are presented with. Was this something you intended?

THOMAS MOORE:  The failures and limitations of language are a huge thing for me and something that I’ve tried to address or take apart in a lot of stuff I’ve written. I mean, I always think of myself as a very inarticulate person, especially when I speak, so it’s something that’s there all of the time. With this book it’s definitely one of the main things that I was trying to work with. I think there are some really interesting things you can unpick from someone’s attempt or non-attempt to articulate something. I like what you said about it being a way of finding strength; I was thinking of it is as a way of managing to find something beautiful amid confusion but I think we’re talking about the same thing.

FZN:  Yeah, we totally are. I also love you how capture this great conversational slanginess in a way that seems super realistic, but you get it to conform to the overriding needs of the text.  I mean, both the way it’s edited to display on the page but also the way you allow the innocuous to bear the burden of so much meaning. I’m curious, how do you go about achieving these effects?

TM:  A lot of it is intuitive––I played around with the pieces a lot until they felt aligned with the emotions that I was trying to investigate. Certain lines were worked over again and again often simplified as much as I could, too. I’m not interested in writing that is there to serve the ego of the writer, or when a writer uses language to show off or intimidate. I think that there’s meaning and complexity within the most simple interactions or phrases; for me it’s almost more to do with the context, more than just the words. Most of the work was done fiddling around with the overall tone of the poems, so it felt like one large piece as opposed to individual poems.

FZN:  Desire in the book is a (to me) super authentic feeling jumble of sexual attraction, the need for connection, and even in a more general way, a want for there to be connections where none seem to exist or even seem possible. The characters seem to idealize the world even though they realize this idealization is fake. All this is also tied together with the often explicitly stated desire to hold on to whatever present/recent past. So, your book seems overridden with romance in a sense. Does that ring true for you?

TM:  Yeah, definitely. Maybe I think of it more as a longing for something rather than a traditional romanticism. But the longing that that characters talk about is blurred, very purposely. It isn’t nostalgic or anything like that. I’m fascinated by conflicting desires, things that are problematic because of how vague they seem and vice versa.

FZN:  You said vague and blurred. It’s an art, one that you nailed, evoking vagueness and blurriness with the fake precision of language. I’m interested if there are specific influences, artistic or otherwise that you look to that achieves these effects. Or even in a more general sense. What writers/artists/musicians inspire you?

TM:  Oh it’s hard to think. I’m a huge fan of so many different artists for a lot of different reasons, but I guess a lot of time I am attracted to people whose work contains a certain confusion in some way or another. Stuff that inspires me… oh it’s hard because I’m a complete enthusiast and I could honestly go on for ages and ages just listing things I like. I guess some favourites (old favourites and more recently) are:  Morrissey, Xiu Xiu, David Lynch, anything Kathleen Hanna related, Harmony Korine, Dennis Cooper, Sonic Youth, Steven Purtill, Michael Salerno, Eileen Myles, Ryan Trecartin, Peter Sotos, Body/Head, Elfriede Jelinek, Hole, Bret Easton Ellis, Iceage, The Breeders, Jim O’Rourke, Loren Connors, Carla Bozulich. I’ve missed out and forgotten loads, I’m sure. I mean, that doesn’t cover the half of it and the list would probably look a lot different on any given day but I guess that gives you some idea. I’m definitely an enthusiast.

FZN:  You mentioned Steven Purtill. His stuff is so great. He’s talked about working on a collaboration with you.

TM:  Oh yeah, the thing with Steven is really exciting for me. Most of all, his art just really intrigues and excites me. He’s got all these amazing moods going on his work, they’re just beautiful. So I’ve been trying to create some texts that respond to some of his pieces and then he’s working on new stuff to go with what I write. I guess I can’t say too much just because it isn’t finished yet but it’s really just been super fun and informative and real pleasure collaborating with him so far. You know him, right?

FZN:  Yeah, he used to live in Bellingham, where I do.  He’s going to school now though. Anyway, his work is pretty universally consciousness expanding. At least for me. He nails a sense of, for lack of a better term, otherness in his work. Honestly, it’s something I get from your writing as well, a kind of sense of mystery, an inferring of something being hidden, something unknown. Another thing I think your work shares with his, is how the personal resides concurrently with a level that is both cosmic and mysterious, huge and hidden.

TM:  I wanted to try and find a balance with tone and mood so that the overall structure had this very broken, just out of view kind of feel. I wanted it to become unclear who is speaking at certain points, I wanted the voices to swap around and reverse and all of this stuff. The idea is to have a set of images, that you can’t see enough to recognise clearly but that give off enough to allow an emotional understanding. So the world/places in the pieces are still recognisable even if the world they’re in is obviously cut off.

FZN:  You reference time and temporal distance, but the way it plays out, you kinda shred time too. Maybe it’s my narrative-minded brain at play here… but I’m really interested… can you talk about how time works in the book, and if and in what ways the pieces are linked?

TM: It’s kinda tricky to explain but I wanted the time structure to feel like it was caving in on itself and turning inside out or something. Or like a snake trying to eat its own tail, you know? One of the ways I felt I could be successful in making this big glacial blur was to make it unclear when things were happening––so at some points it’s supposed to feel like certain events have past already but then there are other parts of the book when you feel like something is yet to happen or is happening there and then. Time was a really good tool to use to help with the disorientation I wanted to forefront.

FZN:  Yeah, that disorientation, I see it as an ebbing and flowing in the text as the voice attempts to approach that which is, on a deep level, unapproachable, then retreats.  It creates this rhythm and I began to see the text as a living thing with the rhythm as breathing, or the text as a world, with the rhythm being a clock… how conscious of the overall rhythm are you when writing an individual piece… how do they come together?

TM:  That was where the majority of time was spent with this book. I cut a lot out. During the editing process the text just shrank and shrank. I ended up taking out certain pieces that I was really, really pleased with but that didn’t work well with the rest of the book. I was messing around with the mood a ton. I guess sometimes it felt like continually cutting off songs because they reached their crescendo; I didn’t want them to seem to obvious. There was a certain tension that I wanted to see if I could achieve by reworking the pieces until they felt choked almost––the characters can never quite get through to what they need to, and it’s never made explicit even though it constantly seems as if it’s almost within reach.

FZN:  I love that, how you “reworked the pieces until they felt choked.” Coupled with the lower case font, the effect is often that the pieces are spoken in whispers, but one of those whispers that are louder than shouting because they occur before this backdrop of silence. Let me ask you this, do you ever think about your words existing off the page, in spoken form or whatever? Do you give readings?

TM: For the most part I think of the work as it is written down. I’ve never done a reading. The idea doesn’t particularly seem that appealing, if I’m honest, mainly because I think I’d feel uncomfortable. But I guess I might try it at some point, I dunno. But yeah, I definitely see the words existing right where they are on the page.

FZN: The book is full of sex (unsafe/risky/dangerous emotionally it is inferred, and physically) as obliteration. Do your characters use desire to obliterate desire and themselves?

TM:  To me, stuff like that always seems complicated and conflicted. I don’t know if I can sum it up properly or any better than I’ve tried to convey it in the text, but desire and all the stuff that goes with it can be confusing and weird and everything else. I know it doesn’t answer your question but in the book I’m just trying to represent that confusion as best as I could.
__________

The Night Is An Empire is out now from Kiddiepunk June 3rd. 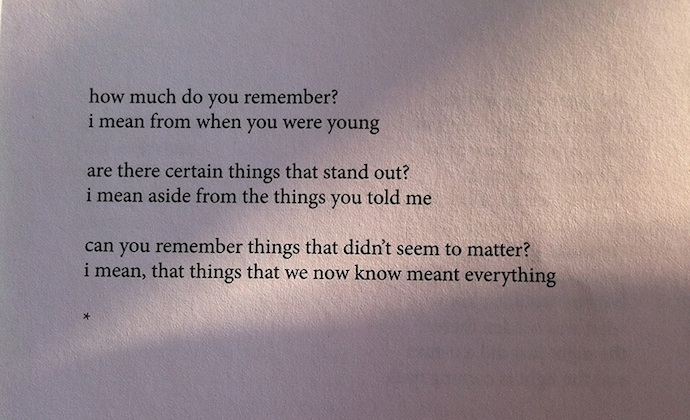