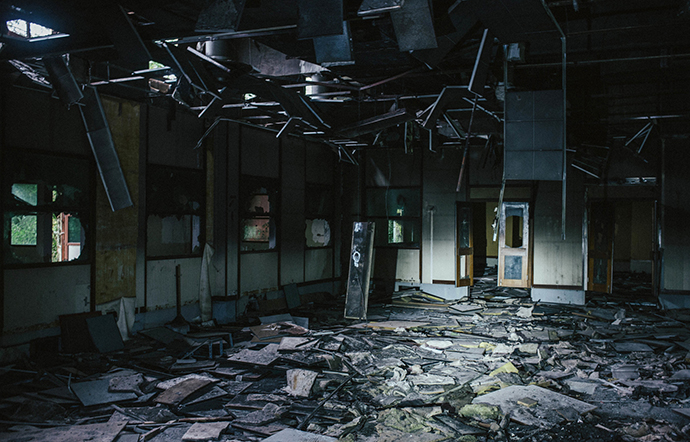 My brother knows I do not like dirt on my skin. When there is dirt on my skin I always try to peel it. When I peel the dirt with my nails the dirt turns to mud. I wipe the mud with my palm and lick it. I would rather have mud taste in my mouth than dirt caked and cracking on my skin.

The light blinds, the chain loosens. My brother drops to the floor. The weight of him shakes the wood. I lift my face from the voice.

The sound does not sound like the sound of my brother.

I spit out a tooth. Nails poke through the wood of the floor. We stop at the glass in front of the chair where sits a man. No skin on his face. Mouth open. No sound in his mouth.

My brother lifts the chain, high above his head, says the word father.

Then he says a word not father.

My brother walks back from the kitchen, hammer in hand.

I look at black holes the father’s eyes once filled.

My brother puts the claw in his mouth. I hear the scrape of teeth against steel. He picks a piece out with a nail. He lifts his finger to my mouth and wipes it on my lips.

He looks me in the face.

The chain falls from my neck.

My skin in the teeth of the chain.

My brother says the father is not the father. For many days he says no other words.

My brother looks at me with a blank face. I wait for him to kick my mouth.

He does not kick my mouth. He walks up to the father slumped in the chair. My brother puts his mouth up to the eye. A maggot crawls out of the eye and into my brother’s mouth. My brother swallows the maggot, looks me in the face and says mother. I repeat back to him mother. He picks a maggot from the eye and says open your mouth.

I walk up to the father, grab a handful, stuff my mouth full. I say mother again and again for my brother, my mouth stuffed full.