The End of Safety Third Enterprises

For the last five years, Matt DeBenedictis, author of Congratulations! There’s No Last Place if Everyone Is Dead, and head honcho of Safety Third Enterprises, has been hand-binding and personally mailing chapbooks. Since 2009, Safety Third has released 11 titles from a variety of authors like xTx, Tyler Gobble, Mel Bosworth, J. Bradley and others and debut chapbooks from Atlanta authors Laura Relyea and John Carroll.

DeBenedictis recently announced that the time has come to retire his trusty stapler and close down the mighty micro-press once and for all. He took the time to discuss the closure with me over email: 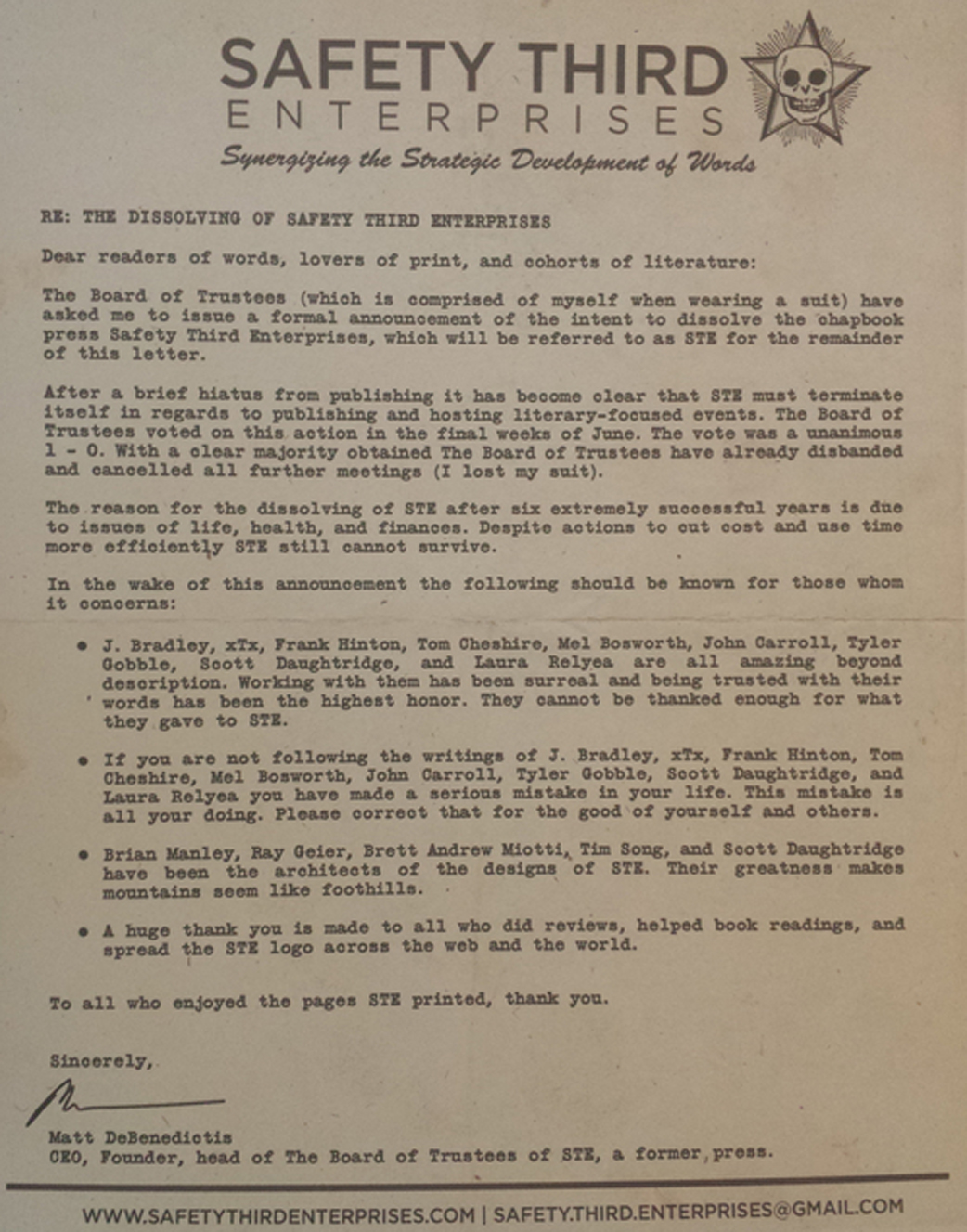 Scott Daughtridge: If possible, write an epitaph for Safety Third.

SD: You’ve done a lot to promote your authors. On your website there is page after page of promo for each new artist. Can you describe the working relationship you’ve had with the authors you published?

MD: There’s something experimental to the nature of a chapbook. They’re a compact documentation of ideas – ideas a lot of the time that can’t be transferred accurately in longer forms of publication, but yet  can hold the same quest for glory a novel can. This is why when working with any of the authors I got the privilege to work with my initial question was: “What’s the craziest thing we can do?”

My answer to that with xTx’s He Is Talking to the Fat Lady was to try and figure out how to pack each chapbook in a smoker’s yellow hamburger wrapper, have the STE logo printed on them, and find a fake grease-like substitute that wouldn’t ruin the books. xTx loved the design pitch and I tried to follow through, but in the end I would’ve had to charge nearly $20 for an object that could fit into a person’s back pocket. We eventually agreed on the stamp cover and just wrapping the book in construction paper to give impression that the chapbook was a gift. The more financially workable solutions to packaging always came from my wife Jennifer. She kept STE alive by being the brilliantly crafty person she is.

A good manuscript is like a double-dog dare to a publisher to go on an adventure. When Tom Cheshire, who was mainly known for his songwriting and performing with All Night Drug Prowling Wolves and West End Motel, showed me his poetry it was written on napkins, bar receipts, and pizza boxes. It was raw and unfiltered. It was a sharp knife drawn under a full moon. Our adventure was capturing all that the only way we could, in his handwriting.

Everyone I worked with felt like a partner in crime and a family member. If I didn’t know any of them I’d still be following each word they published as much as I do now.

SD: On your website it says, “Phase two is revealing itself, slowly, like a teasing revelation. Until all is clear there will be more ink on paper.” Did phase two reveal itself?

MD: I always forget I wrote that. When I first started the press the initial idea was to write all promotion copy in a mix of corporate memo talk and L. Ron Hubbard brashness. Have you ever read any of Hubbard’s Scientology writings? They’re amazing. Sure the dude was most likely a stellar con artist or bat-shit nuts (or both), but his ability to not just make up words but also repurpose them to change their definition was ahead of his time. In the last decade corporate press releases really took to his style, which I like to call “bullshitting to the max.”

SD: Looking through your catalog, you’ve put out a lot of first books from authors like xTx, Tom Cheshire, John Carroll, Laura Relyea, and other books from established people like J. Bradley, Tyler Gobble, Mel Bosworth. How did you approach the various writers you’ve worked with?

MD: I think I took the name Safety Third too seriously, to the point that everything was delightfully destructive. Maybe that’s a good thing though. Maybe that’s how I matched the passion that I could see in all those authors’ words.

If I wanted to work with someone I would contact them and ask if they had anything to read. Whenever I read a manuscript that had me thinking of what it would take to put it to ink, I’d consult anyone STE had already published (I told you it felt like family). I got an e-mail with lots of exclamations from xTx about Frank Hinton’s I Don’t Respect Female Expression. That was all I needed. First pressing sold out in less than two days.

SD: Is this a Michael Jordan type of retirement or Lou Gehrig type? What’s the likelihood of you getting back in the game wearing a different number?

MD: Anything is possible. I’d like for it to happen and be a lot less of an attack on my personal finances.

My health and the cost of my health is the real reason I’m retiring the press. The whole concept of STE came about after having a surgery and I was basically stuck in bed for almost two weeks. I thought starting a press would be the worst possible decision to make when finding out that my immune system was permanently damaged and I’d be having procedures, surgeries, and eating pain pills like candy for the rest of my life. Turned out it was the best decision.

If I do start a press again I’m just going to beg Mark Cugini every day to let me publish his poetry.

SD: Do you have any advice for anyone interested in starting a small press?

MD: Do it. Just do it. Don’t think. Don’t rationalize. Words with weight need to be in ink and not just a part of HTML codes.

SD: Aside from publishing, you’re a great writer. You’ve released four chapbooks. What’s on the horizon for your own stuff?

MD: If you’re trying to make me blush, we can just watch Boyz n the Hood together, with the lights off.

Right now I’m in the early stages of creating a religion (in the non L. Ron Hubbard way – at least for now). I’ve always loved reading about the Second Great Awakening in America. This was the major religious shift that happened in the late ‘1700s that gave birth to Mormonism. So many religions and interpretations of Christianity started during this time, usually being rooted around small towns in the Midwest, and most often was wrought with tension and bloodshed. Playing with that history and shifts of faith under a very Americana backdrop is a pleasant foundation. Who knows where it will all go.