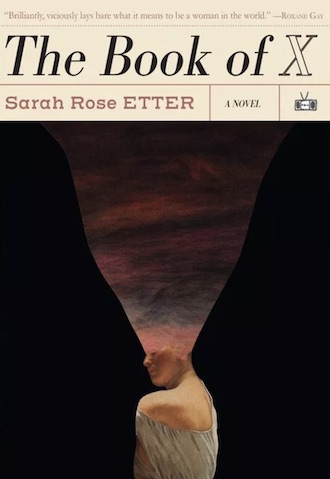 Solve for x. The x factor. The X-Files.

In these phrases (and TV show) x is a stand-in for the unknown. But x can stand for more than mystery. A x can, in effect, erase another word. A signature can be written with a x.  Sarah Rose Etter affixes a new meaning to the letter x in her debut novel, The Book of X. While x retains an unexplained aura, Etter goes a step further and equates the letter with what American society has historically categorized as unfamiliar (see also: dangerous, marginalized, unpredictable, etc.): woman.

The Book of X isn’t quite a coming-of-age tale, but rather a novel that makes the experience of life for one woman incredibly visceral. Cassie’s descriptions of the world around her and her dialogue read as deadpan and matter-of-fact, like she is already resigning herself to others and the world at large. This tone is even more entrenched in part by various “fact sheet” pages in the book where information is plainly written about a variety of subjects, such as kissing, cities, and engines. Also, there are no chapters here: only short, sometimes barely paragraph-long sections where days can pass and Cassie might not talk to anyone. Time is always going forward, but with jumps and skips. The title of the book itself and this early depiction of the protagonist, Cassie, is described matter-of-factly and with Biblical implication:

Deborah X, also delivered one daughter and one son. The daughter, Cassandra X, was born a knot. The son, again, was born unknotted.

This very rare gene resides on the X chromosome. Doctors have determined the knots are largely a cosmetic issue, potentially rendering the women outsiders in society.

There’s no “potential rendering” about it. Cassie’s knot becomes the bane of her existence and the physical trait by which everyone in her life reacts to her. She is the definition of outsider. Besides the heckling of her classmates, Cassie’s interactions at school are mainly limited to two people, Sophia and Jarred. Cassie admires Sophia, an unknotted classmate who “wears a red dress, then a blue dress, then a green dress. In the afternoons, Sophia laughs in the lunchroom, and light bounces off the white of her teeth. Sophia knows a joy I do not know.” Cassie is a keen observer, at the same time revealing little about inner life to the few people she actually interacts with. After becoming friends, Sophia asks to see Cassie’s knot. After reacting in a harsh manner, Sophia comforts Cassie: “‘I think I saw Jarred staring at you today.’”

Cassie’s “relationship” with Jarred is more on the disturbing side and is reminiscent of Welcome to the Dollhouse protagonist Dawn Wiener. At first, Jarred treats Cassie with disdain like the majority of her classmates; while at lunch, Jarred walks to Cassie’s table: “‘Stop looking at me you fucking freak,’ he whispers. ‘You’re disgusting.’” Soon after, Jarred secretly sees Cassie whenever he wants to assert power over her.

In the second part of the novel, Cassie moves to the city, far from her family and the Meat Quarry. She gets a dead end job as a typist and her life is:

While Cassie goes through the motions, her friend Sophia falls in love, gets married, and has children. Cassie’s parents call and she lies to them about how she’s doing; the Meat Quarry is drying up and business slows to a halt. Cassie meets men at bars, but once they see the knot, they walk out her apartment door. Cassie is able to find a surgeon in the city who removes the knot, but she remains despondent and lonely.

In the final part of the novel, Cassie’s loneliness drives her to move to the country. She quits her job in the city and uses her saved up gold coins to rent a shack in the country. A chance encounter at the grocery store engulfs Cassie in love with Henry, an engine mechanic. They soon start an affair and Cassie is brought back to life:

I stare up into the wild sky of his face and a new chamber of my heart expands, a fresh gust of wind through the red chambers.

This is in sharp contract to Cassie’s last encounter with Jarred, her first love interest, at the Meat Quarry:

It happens so fast I don’t know what it is, but then he is inside of me, the hardness of him, the tearing of my body, a strange harsh heat searing between my legs.

I stare up at the red quarry in the afternoon light, wet faced, numb, chest empty.

Cassie’s rape casts a long shadow over her life—she is made to feel only like a piece of meat to be consumed by a man. It’s only at the end of the novel, years removed from her assault, that Cassie is able to find true joy. But like most morsels of happiness Cassie enjoys, this love with Henry is fleeting. I won’t give away the end of the novel, but the drag of Cassie’s life can only steer her in one direction.

Cassie’s visions throughout the novel, as well as the world she inhabits where meat is harvested from the earth, gold coins are used as currency, etc. are surreal to be sure, but these fantastic details don’t make Cassie’s world seem fantastic—they make it seem closer. At the heart of the novel is an all-too-common, yet underrepresented portrait of how society at large treats women and how much women are expected to overcome with smiles on their faces.

In The Book of X, Etter has written a disturbing, yet familiar feeling novel. Existing is hard. It’s even harder if you’re a woman. It’s even harder than that if you’re a disfigured woman who almost no one recognizes as human, as someone worth basic dignity. Etter’s novel puts the magnifying glass not over a future world, but the one we already wake up to every day.