The Art of the one-Manband: A Review of Suno Deko at 529 and Bois’s Lost 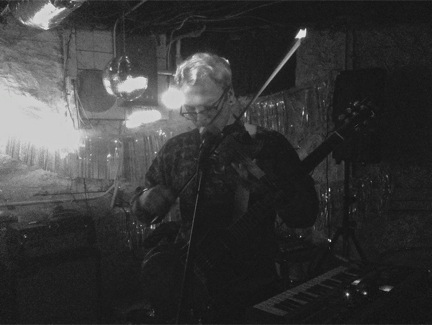 Atlanta-based David Courtright is a poet and it is apparent in his magical, personal, and at times tragic lyrics that pepper the textured melodies of his solo act, Suno Deko. His first EP Thrown Color is due out towards the end of June and he should be teasing us with a new single any day now on his SoundCloud site. The thing is, this doesn’t sound like just one person. It’s reminiscent of the complexity of the Beach Boys’s Smile.

How does he do it? I start to wonder, but I am too busy dancing and smiling really big and trying not to cry at the same time. He seems to be talking about a relationship— like every relationship that I have ever been in. The song “Thrown Color” is over-lapping layered textures grounded by a steady beat. Courtright’s voice becomes an instrument in its own right, when he hits those higher registers. “Take the color from behind your eyes. Throw your color back into the sky.” The strong lyrical content from this wordsmith takes Suno Deko to a level of depth; far beyond the numerous collections of thinly strung indie pop songs that are at our “Bandcamp” fingertips. The combination of the intelligence in Suno Deko’s wordplay, paired with the innovation of one guy on stage with lot of really cool toys is tough to fuck with. He starts to get quiet. “The stars burn holes in our bodies. Holes we fill with our dreams. I’m walking backwards through you.”

The choruses are chant-like and Suno Deko becomes some kind of sentimental shaman that can still rock. He digs, he touches your colors, and he brings them out. I am in a trance in the middle of 529, the dive bar in East Atlanta and I could be in the middle of a desert, high as a kite on peyote. Courtright has described the absolute definition of love as a yearning, an honest innocence, and a trusting path all through the use of song. Some songs have wicked beats. Like “Cinders.” There are lots of petals and affects utilized, all with great skill, that make you forget that the guy is doing a million things at once. In his songs, he is begging for a person to return his love. As we all know, it doesn’t always work out that way. He doesn’t want to feel this close, to give his love to this person. But, there is no mercy or escape. And who wants to escape love anyway? 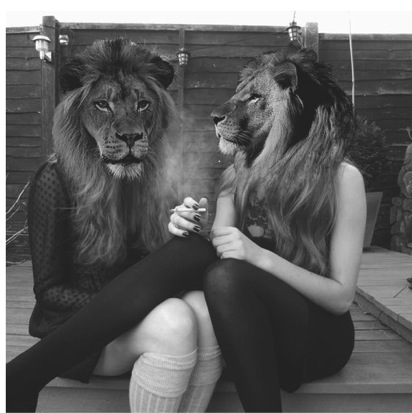 Sometimes Courtright sounds like a girl, and it’s good–really good. He’s not afraid of himself because he wears an armor of the most beautiful melodies that are sure to hook you. There are repetitions that feel like meditations. “Bluets” breezes in with the comfort of nostalgic indie rock with a twist, sort of like the fancy mac-and-cheese at Argosy. He begins to chant with a lot of “Oooh’s an Oh’s” that reminds me of a 1950’s Doo-wop act. There is also clearly a surf rock element to Suno Deko, but it is not overpowering and doesn’t make me seasick.

I don’t know which to fall in love with first: these words, David with his shock of blonde hair, Buddy Holly glasses and androgyny, or the sounds that could only be constructed in someone’s version of a heaven that are being emitted from this stage. I feel an emotion from these songs that stings, soothes, and inspires. I think the pieces are also about memories, memories of connections, of being close. “I would tear the stars down for your love, I would sleep forever in the dark, dreamless night.” There’s a hint of the flawless Roy Orbison in his vocals. It was gritty 529 and it was absolutely beautiful. I’m still humming those melodies to myself days later—they stick with you.

Bois, pronounced /bwa/, actually took the stage before Suno Deko. Bois is comprised of Brian Bo, a New Orleans based musician and visual artist. He is taking us to the future, but he is using these discarded orphaned instruments that he restores. For instance, a dig through the neighbor’s trash led to the discovery of parts making up a Moog Prodigy. Bo is not new to the scene, he’s been writing music and touring with different acts like Mini Prophets, Clock Hands Strangle, Country Mice, and more for over a decade. He’s also been known to play collaborative sets with Mitch Meyers of the experimental band Peace Arrow. 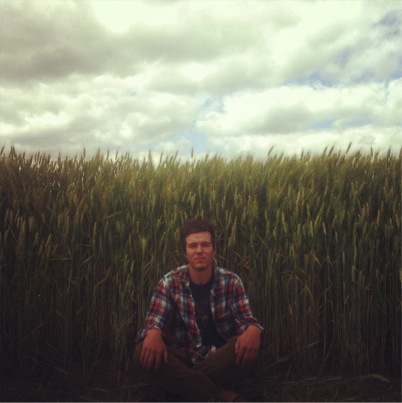 I bought his hand-made record called Lost, with thirteen tracks that I would say are full of luck. He hand cut the vinyl himself at Rabbitfoot Records in Florida by using a vinyl lathe. The limited-edition vinyl is beautiful with a signed 2-color screen-printed sleeve and insert. The Lost LP is available through MiniProphets. In the first track “Melbourne”, Bois utilizes sound clips of people’s voices in conversation. There are jazzy, atmospheric intros. I loathe soundtrack scores, but these tunes are made for a film that I definitely want to see. 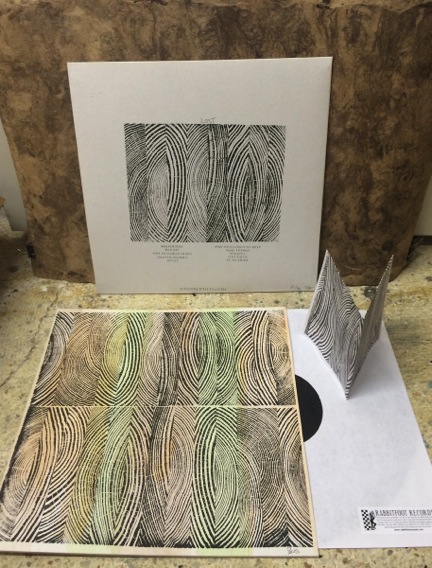 Bo is beautiful on stage. He looks like he wants to take you down by the river and go skinny-dipping. There is a lack of his vocals at the on-set of the album and you don’t know what you’re in for. On “Wolves” you get the feeling that he wants to be bad, but that he’s a total sweetheart. “I want to say something honest.” Honesty and kindness are two traits that I find myself valuing more and more with each passing year. Now, at 34, I have to say it’s a lot easier to be honest when you just don’t give as much of a fuck as you did when you were a youngster.

Lost sounds like it was recorded in Bo’s bedroom, all lo-fi, but the live experience at 529 took me out of any room, down and out into the streets, and up into the sky with the stars. 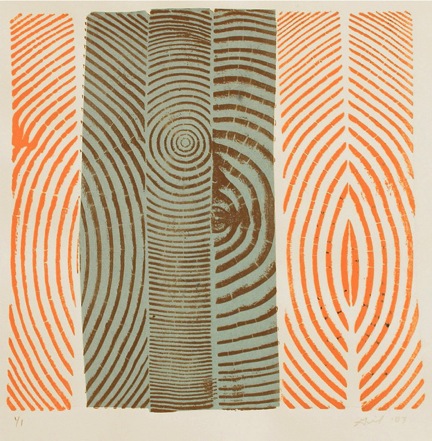 At times it is difficult to decipher his intensely haunting vocals. But this doesn’t seem to matter. Bois sings often in a lovely falsetto, a subtle attack on our auditory system. All you can do is sway back and forth in the middle of this tiny club and be thankful that you didn’t just stay home tonight. If it reminds me of anything, it’s maybe the early Flaming Lips’ stuff. A friend of mine remarked how fantastic it was that Bois staid so lackadaisical with all his loops, pedals, and found sounds to juggle. With “One Hundred Years” we get beats. He’s singing about “seeing the sounds” and I’m seeing them. This is tranquil and the audience is witnessing something special. Bois is setting indie rock on its head, facing it backwards, and then letting it spin.

His voice is the unique kind where it feels like your own voice might be making the sounds. You are right there with him. But, is he trying to understand what he takes in or is he just along for the ride? There are more sound clips that sound like a preacher going off all sermon-like over a rolling hill of beats. I start to miss his singing. I kept thinking about water during his set and I think I fell in love a little bit with the music, but also with the scene he was setting for us. These are lazy, hazy, Southern days and nights. 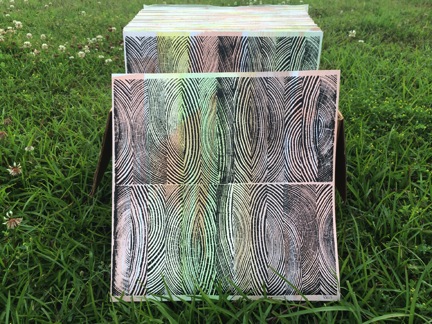 Through a pastiche of tones and beeps it’s hard to decipher what instruments he’s playing, which I found to be a really interesting part of his act. Sick beats return, maybe with the addition of some horns. And then at times he surprises us with sounds that could come from some sort of weird music at a carnival. In “So Go” his voice becomes it’s own instrument, similar to what Suno Deko’s vocals can do. This is another one-man show that feels like an orchestra.

His vocals don’t try, they just are. And that’s what we are all striving for right? To simply “be ourselves”. Track 7, “All I Need”, has no vocals and brings forth looping ghostly sounds that make me feel like I’m in a straight up haunted house, but one that I want to break out and dance in and maybe even get down low. Sometimes Bois sounds like a wounded animal. You want to take care of him, console him. This is brand new and welcomed territory. Bo is all Huck Finn Southern and sensitive boy charms. With “False Love’s” jazzy start, I wonder if I’m at the Blue Note or Smalls Jazz Club in New York. And I thought ESG got “Moody,” but this track is a dark one. I’m still with him though, and maybe they have all been somber numbers in a way. Then we hear clips, maybe from a film. It feels intimate. It’s not all a downer by any means, its transcendent and there are enough bells and chimes to keep me grinning. He’s crying out for life to answer him, for inspiration, for the truth. He seems to be grasping for something solid through all the ephemera. It’s a slow burn with Bois—and that’s the best kind—and it’s so worth the wait.