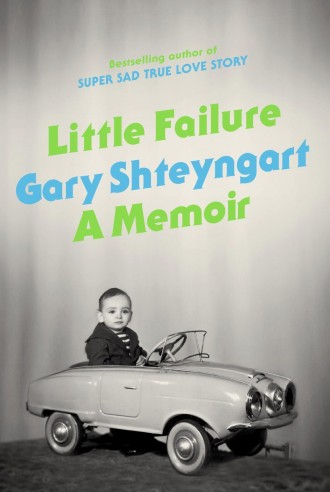 Guys, I’m here to recommend Little Failure, by Gary Shteyngart. If you’re balking at yet another article about Shteyngart, it is probably because he is the kind of writer who writes a lot of blurbs and makes funny YouTube videos with famous literary villains like James Franco and Jonathan Franzen. Franzen, in his recent (what I think is actually kind of awesome) screed against everything that’s wrong with you damn kids nowadays, could have just as easily referred to “Gary Shteyngartian self-promotion” as “Jennifer Weinerish self-promotion” and gotten the same point across. Shteyngart likes to make a character of himself, like a professional wrestler or Rob Ford. You can see this kind of Manhattan YouTube literary advertising as indicative of a troubling trend in publishing, where a writer has to become a celebrity first to get you to buy the book. Furthermore, Shteyngart writing a memoir feels more like some push from the publisher as a result of Shteyngart’s being famous as a kooky character who runs around in Google Glass for the New Yorker website, rather than Shteyngart’s actual need to express himself via autobiography.

Of course the ideal should be that the book a writer writes make him famous, not the Anne Perkins-studded trailer for the book. Or better still, all writers should merely toil away in the actual wilderness, in silence, in some shack, with only a pot of gruel and some liquor, away from bothersome wives and children, and we should read their books in similar straits, only to report back in a published academic journal on what objective literary merit the book has or doesn’t have, what light it sheds on our souls. Right?

But if you don’t like Gary Shteyngart, I think you are most likely a Person Who Doesn’t Like Fun, and therefore we can’t hang. Here are some observations I have about the book:

This first observation, because it involves an aesthetic choice regarding grammar, is going to seem kind of needling and whiny, especially if you are one of those alt lit kids who thinks we’ll all transcend our physical bodies and achieve enlightenment if we just put our apostrophes in funny places. Shteyngart chooses to write in the present tense throughout the book, which places the reader directly in the moment at any given point in the story, even though the book is written in a somewhat nonlinear fashion. Mostly this is effective, but occasionally it is jarring. Once he comes back to the actual present, he must remain in the present tense, but he could be still in the past for all you know, and you are unnecessarily confused for half a sentence. Not that everything has to be so easy to read, but the confusing effect seems unintentional and extraneous. Now if you’ll excuse me, my mommy left my clothes out for me on my bed.

Gary Shteyngart is great at describing food and architecture. His love of and appreciation for food, especially, are gifts to his writing. In general, his memory of his childhood is incredibly rich and vivid, and the book is full of stuff most people try to erase from their heads, written in sumptuous detail. But in this book especially, Shteyngart uses food details to characterize himself as someone born into want, and for whom America has provided, in addition to plenty of heartbreak and neurosis, a world of comfort, zest, excitement, and pleasure.

The story of an immigrant can be a metaphor for the story of any outsider. Certainly Shteyngart is no Valentino Achak Deng, but he describes his experiences with a pretty barbaric method of curing asthma, and physical abuse at the hands of his father, which latter he treats with a tone somewhere between Homer strangling Bart and The Crystal’s “He Hit Me (It Felt Like a Kiss.)” These experiences are worse than anything I ever went through as a child, but his accounts of a tumultuous home life, escaping that life through books, being a weirdo in elementary school, desperately wanting the endless Star Wars toys all the other boys seemed to have, not living up to the potential of his childhood imagination and going to a pretty easy college and drinking too much and falling in love and making a fool out of himself, all spoke to me a great deal. I think you don’t have to be a Russian immigrant or an immigrant or a child of abuse or a writer or a “nerd” for Shteyngart’s stories to move you—Little Failure adds up to something greater than this list of potential audience demographic types.

Much of what concerns Little Failure is gradations of privilege. Shteyngart writes profoundly about his family’s racism against African Americans and “Spanishers,” and how he managed to get out of it, but he also acknowledges hipster codes he learns at Oberlin College: “You can’t announce your ambitions. You have to join a band where you dress like a chicken . . . The rich will rule at a place like Oberlin, where their kind is technically forbidden.” He does this without ever pitying himself. He draws a connection between his overt outsider status in elementary school, the subtle one he experiences for the rest of his life, his cold parents, Capitalism, and his insatiable need for love, both romantic love and literary appreciation.

Love Shteyngart. He deserves it.

One last thing: Shteyngart’s parents, when they are fighting, use the invective “Go to the dick” against each other. Can we make that a thing?