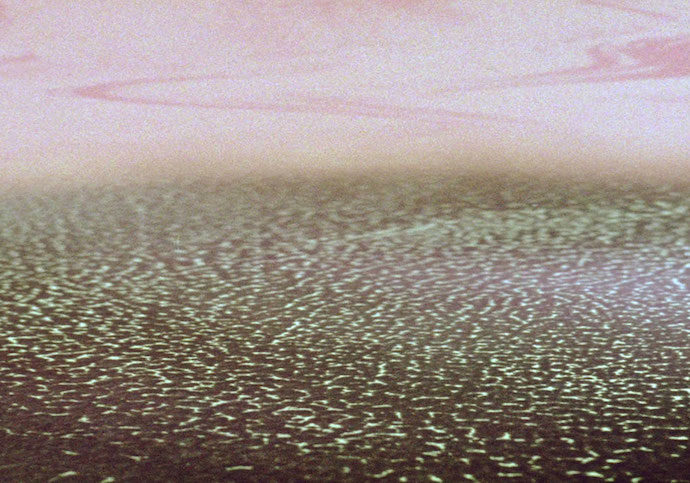 In short, the band disappeared. The lead guitarist was the first to speak of space. He was becoming obsessed with the ideas of anti-gravity, high-pressure, planets consisting entirely of gas or water, and alien life. He would voice his concerns to the rest of the band and they listened, sometimes too intently, while I stood off to the side thinking it was some sort of joke. He would repeat, We need to do something about it. About what, I asked him. About the universe, man. It’s out of control, he told me. I’d come to the studio and the lot of them would be sitting around watching video footage – footage that was often static ridden, questionable, and eerie, wherein people were discussing encounters they had had with four metre tall beings. These testimonials were long-winded and based on speculation. I suspect some of the testifiers were suffering from psychosis-based illnesses. Schizophrenia, maybe. During this time, unannounced to me, they had flown to Switzerland, apparently in a manic state – I’m told by authorities at the airport, and met with the leading scientists running experiments on the Higgs bason in clandestine laboratories using particle colliders. When the band returned, they were visibly flustered, worse than any drug binge or emotionally tumultuous break up I’d ever witnessed. The singer, a man who had never before uttered a word about space, was now in the worst condition. Everywhere he went, he carried an unpublished manuscript by the Polish author, Stanislaw Lem, which was the basis for the sequel to Solaris. Where he got it, or if it was indeed authentic, I don’t know. But he told me one night in the studio, when they were supposed to be writing music for the film, that space keeps expanding. It is infinite, he told me, and it is growing at a pace our feeble minds cannot fathom. I tried to explain that was the case and always had been the case, that space had no boundaries. But it was a mistake, clearly, as I had involuntarily confirmed his suspicions, which sent him spiraling through an episode of manic psychosis which ended in none other than his disappearance. The rest of the band, upon discovering their friend and band-mate had seemingly vanished into the void, became paranoid. The synth player told me he had been sucked into an alternate universe. According to him, the singer had opened a door here on earth, in his flat where his wife was teaching piano to a small child, which doubled as a worm hole, and his body had broken down into billions of particles and shot through the reaches of space, where he was now being held prisoner by a malicious form of life far superior to our own.  It seemed like some huge elaborate joke, like they were messing with me for entertainment. But then I asked, how can you be sure? And the response: how can anyone be sure of anything? It was then I realized the situation was dire. The singer actually was missing. The lead guitarist had gone missing too, but three days had passed and no one noticed, as they were so convinced by their own delusions of the universe that they had forgotten who they were in this world. By the end of the week, none of them were answering my calls. I stopped in at their respective homes to find their families unfurled, desperate for answers and out of places to seek them. It was as if they in fact had just vanished, expanded beyond the reaches of earth and far into the undiscovered corners of the galaxy. The studio producing the film was calling asking about progress and in my agitated state, I told them it was coming along. The truth was, it never even started.

Luke Kokoszka is a writer and musician living in the Fraser Valley, British Columbia. He can be found eating bánh mì and exploring the vast roads of Canada. His fiction has appeared at carte blanche, Cheap Pop, Potluck Magazine, and elsewhere.