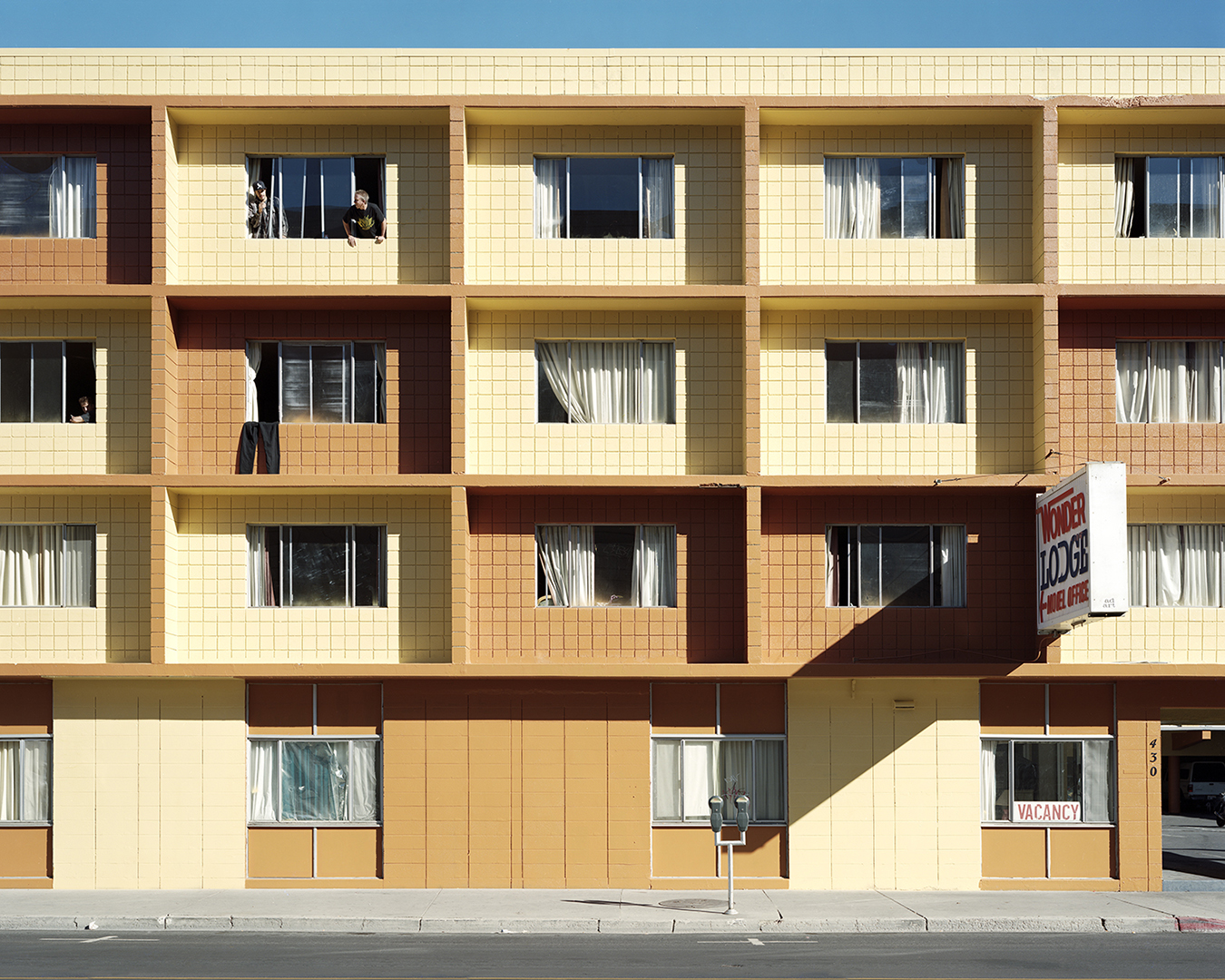 Like Walker Evans before him, Marshall Scheuttle is a rover. He’s traveled with the circus, he’s been to the hinterlands, the falls, the white sands of New Mexico. He’s stood in the bondage dungeon and he’s stood inside your living room, in the godless suburbs, the rivers of Georgia, the barking wilderness. And when he shoots his photographs, Scheuttle likewise refuses to look back at the people and places of his life with nostalgia or longing. In his portraits of the people of Nevada and the landscapes that surround them, Scheuttle defies the essence of portraiture as an act of surveillance and places his viewer in the not unaggressive role of the examined. His landscapes tell us to reconcile with ourselves and why we’re here, what our bodies are able to accomplish within these borders. Instead of emboldening or pleasing the eavesdropping eye, the people in his portraits gaze out at us with a flare of criticism. In this regard they’re of a piece with the mountains and sand that encircle them, and both parties want to know what gives us the right to look at anything other than ourselves in the first place. —Danniel Schoonebeek

Danniel Schoonebeek: You’re the only person I know who actually chose to move to Las Vegas on purpose. It reminds me of William Carlos Williams: he chose to stay in Paterson, NJ, dedicated himself to writing about the people around him. Tell me about your decision to move to Las Vegas. And this photograph, Wonder Lodge, can you give a sense of its place in this city? And what’s going on with these window-gazers, the pants, the sort of brutalist repetition of squares, tiles, colors, windows, even shadow?

Marshall Scheuttle: I was reading Williams’s poem “To Elsie” on constant rotation in my last weeks in Buffalo. “The pure products of America / go crazy,” he says. And  I was obsessed with Joseph Conrad and Francis Ford Coppola and sleeping on a broken mattress in an empty apartment. I think I was realizing that it wasn’t just an interest in the process of throwing myself into Las Vegas; I think I was realizing that even on the other flip of the coin it was a place I was heading to all along. I think I love it more than I’ve ever loved a place in my lifetime. Its faults run congruent to my own. Not a ton of curvy roads in this Valley if you get my drift.

There’s a movement to it, this terrifying dance, predicated on the idea that you come here to unleash the parts of yourself that don’t make it past the front door of the life you’ve built yourself. For the rest of us it’s a saving grace or an end of the line. You can guess the more prevalent outcome. There’s an honesty to it, though when you’re still here the next day and have to see the heartbreaks on every corner. Las Vegas is the culmination of our American failures. It is, perhaps, the most honest place I’ve ever lived. I will always love it for that.

I would expect some person of better graces and talents than myself could elaborate further on these opening thoughts, but I’ve watched those same people get cut up in the sunrise bars, and I’ve seen them cut lines until the guy on the scooter doesn’t pay and the knives come out.

Longwinded way of saying I feel like it’s a place of such specific currents that it’s necessary, in my case, to be a part of this city and not just on furlough. The architecture of this motel is important to me in that it embodies a key feature of this area: it’s built to reduce the impact of the sunlight on the rooms. That tiling becomes this compartmentalized chaos and a reminder that this valley is not supposed to be habitable. The sun will literally kill you and I’m constantly excited by how the architecture is structured around circumventing that. Top left corner [in Wonder Lodge (above)] is what I consider to be one of the best portraits I’ve ever taken. That man is the weekly motel Lucifer I always dreamed of inhabiting a photograph like this. 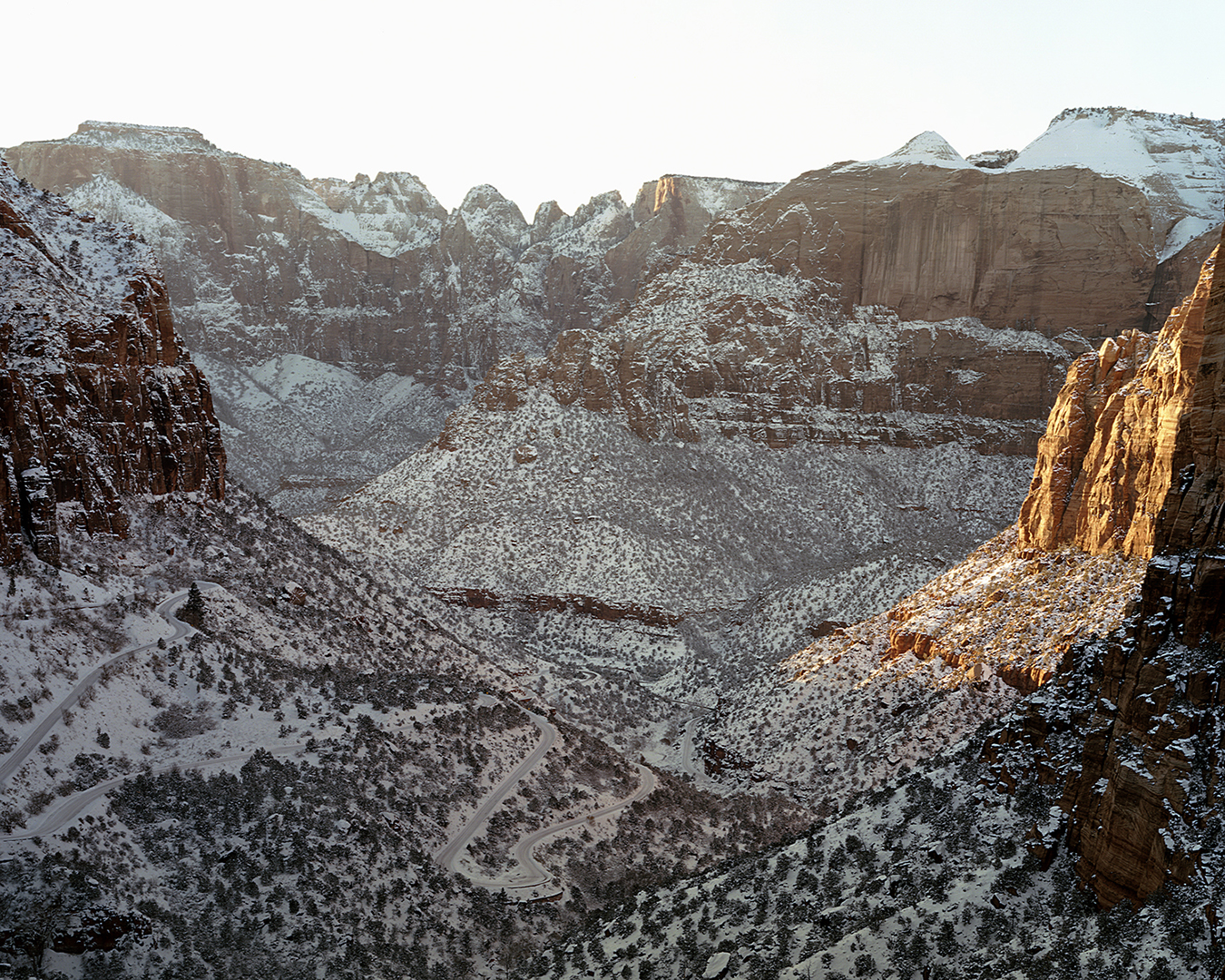 DS: A lot of landscapes console in a way, like they remind a viewer that his feet are on the ground and nature is beautiful, but your Nevada landscapes feel colossal and unnerving; they give me all this anxiety. In this photo (above) the perspective feels like I’ve been dropped out of a helicopter. How does that sense of scale interact with the relative smallness of a photo like Wonder Lodge?

MS: The narrative transitions in this series are about creating a dialogue between the vast physical space of the desert and this madness that’s been plopped down in the middle of it. There is an intense sense of scale out here; the desert just swallows up the sky and stretches forever. I think the isolation this makes me feel confirms my sense that Las Vegas is a valley that traps you, and it’s surrounded on all sides by a natural force that’s even more overwhelming. Whenever I leave the city, I always feel like the landscape is putting me in my place, almost saying: You’re not getting out of here alive. It’s incredibly beautiful though: the massive weight of it. 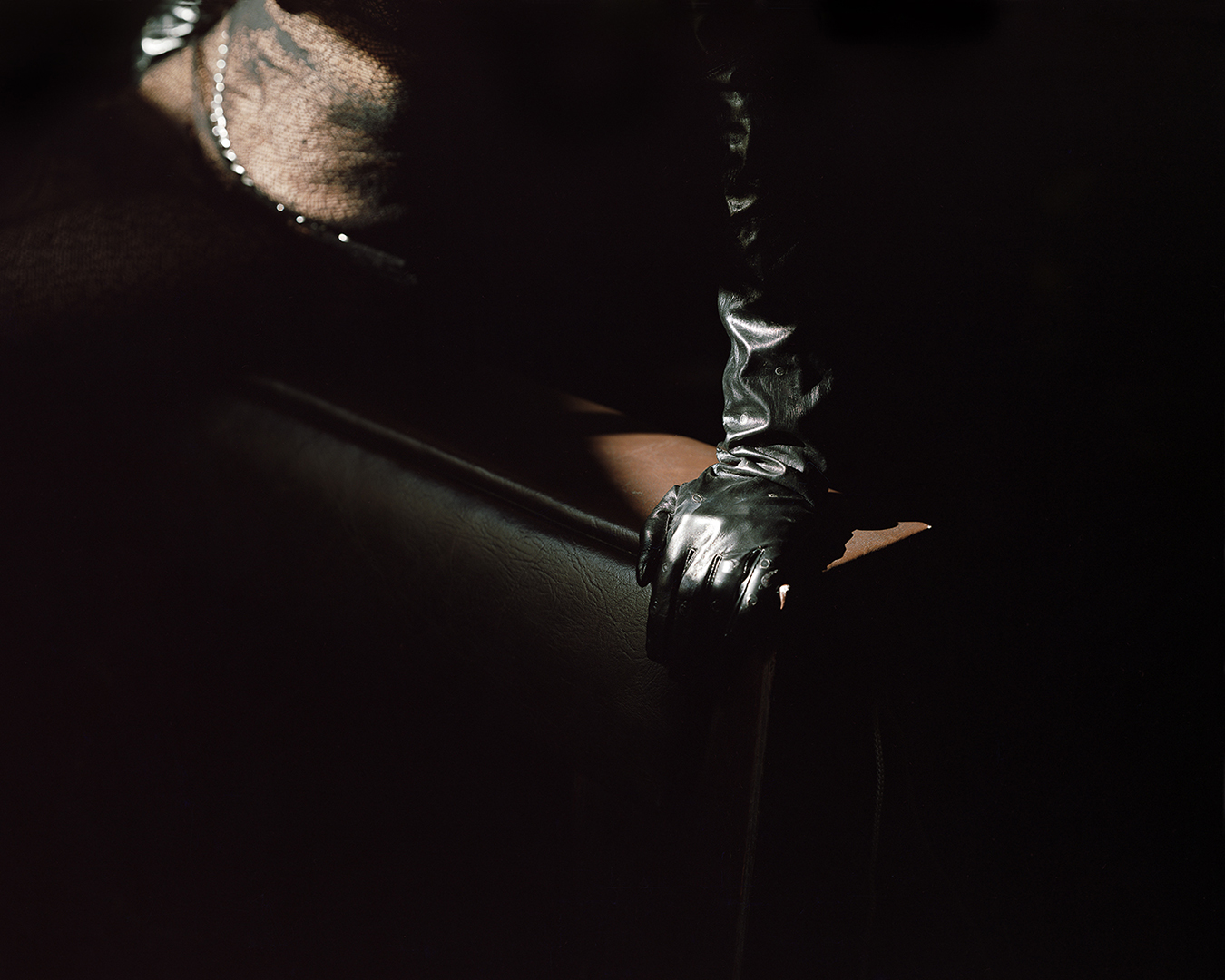 DS: Bondage Dungeon dangles a narrative but entirely resists it at the same time. The leather arm is driving down through the top of the frame; it means business, but the light’s pulling away toward this flourish of what looks like skin. You often insert yourself into situations and economies that are unfamiliar to you; for instance, you’ve traveled with and photographed a touring carnival crew. What’s the world in this photo?

MS: This is one of my favorite images from the series, and I think it speaks to the narrative ambition of the work as a whole. This is a Dom in a bondage dungeon at a legal brothel. Leather gloves, boots, the whole kit and caboodle. Normally I’d be like: okay, bondage dungeon, portrait, let’s just try not to fuck this up and we will come out with something provocative. The room where I shot this had one tiny window to ward off claustrophobia but still limit the desert sun entering the building. All these places housing various levels of vice were built in order to hide the sun and accordingly created these incredibly lit spaces. Like when do you walk into a bondage dungeon and get perfect 45-degree Renaissance light from the modern equivalent of a castle window? I started dwelling on the idea that maybe the sunlight–the desert embodied, in a sense–was becoming this protagonist of these images. Maybe they’re about the beauty that’s created when two forces intersect in this environment neither of them really belong in. Or maybe I just have a thing for gloves. 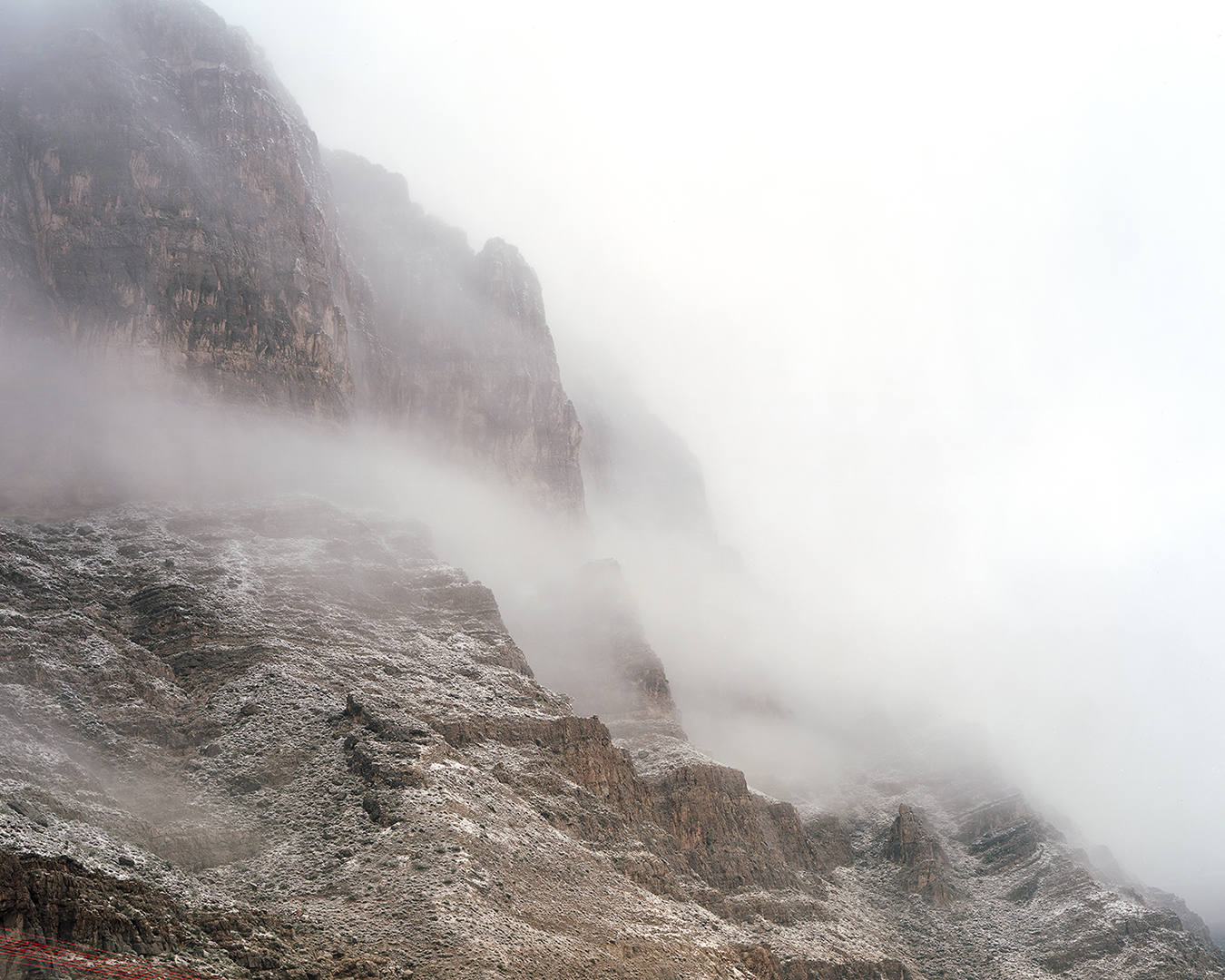 DS: The conflict in Nevada Border Storm, for me, is that the photo can’t fully contain its geography. It’s like we’re seeing the flank of some massive animal that’s slumbering, which reminds me of that passage in Exodus where God lets Moses look at his ass but not his face as he passes, such is God’s size. What conflicts do you feel in your landscapes? Do they reach any sort of “holy” scale?

MS: This is a mountain pass that sits exactly on the Arizona-Nevada border, about 45 minutes outside of Vegas. I passed through here on my way into Nevada, driving from the east. Every time I drive through this area there’s some biblical-level storm or chaos happening that just seems to scream forth this foreboding drama. Most of the landscapes in this series focus on desert storms and geographic clashes. I think the scale of the place allows for these rare opportunities to see landscapes smash into one another and I find that romantic in a sense.

DS: My eyes do a tug-of-war when I look at this one: I want to follow the expanse of the dirt and grass straight forward, but then I smack into a range of vast hills, and above that the sky is streaking a wisp of clouds to the west, out of the frame, and above that is the deeper blue of the atmosphere, and the moon of course crowning the whole photo. How do all those impulses interact in this photo?

MS: I once showed this photograph to someone and they were like, Nice Ansel Adams shit, bro, and it’s funny because until that moment I’d never even thought of comparing us visually. It’s so clearly for me about how the cloud cover is separating the transition from night into day, warmth into cold. It’s about the transitions and clashes occurring in these vast spaces in the desert and of course how beautiful and humbling they really are. It goes back to the buildings fighting the sun: it’s this constant tug of war between the natural order of the place and the part of it we have decided to try and inhabit. 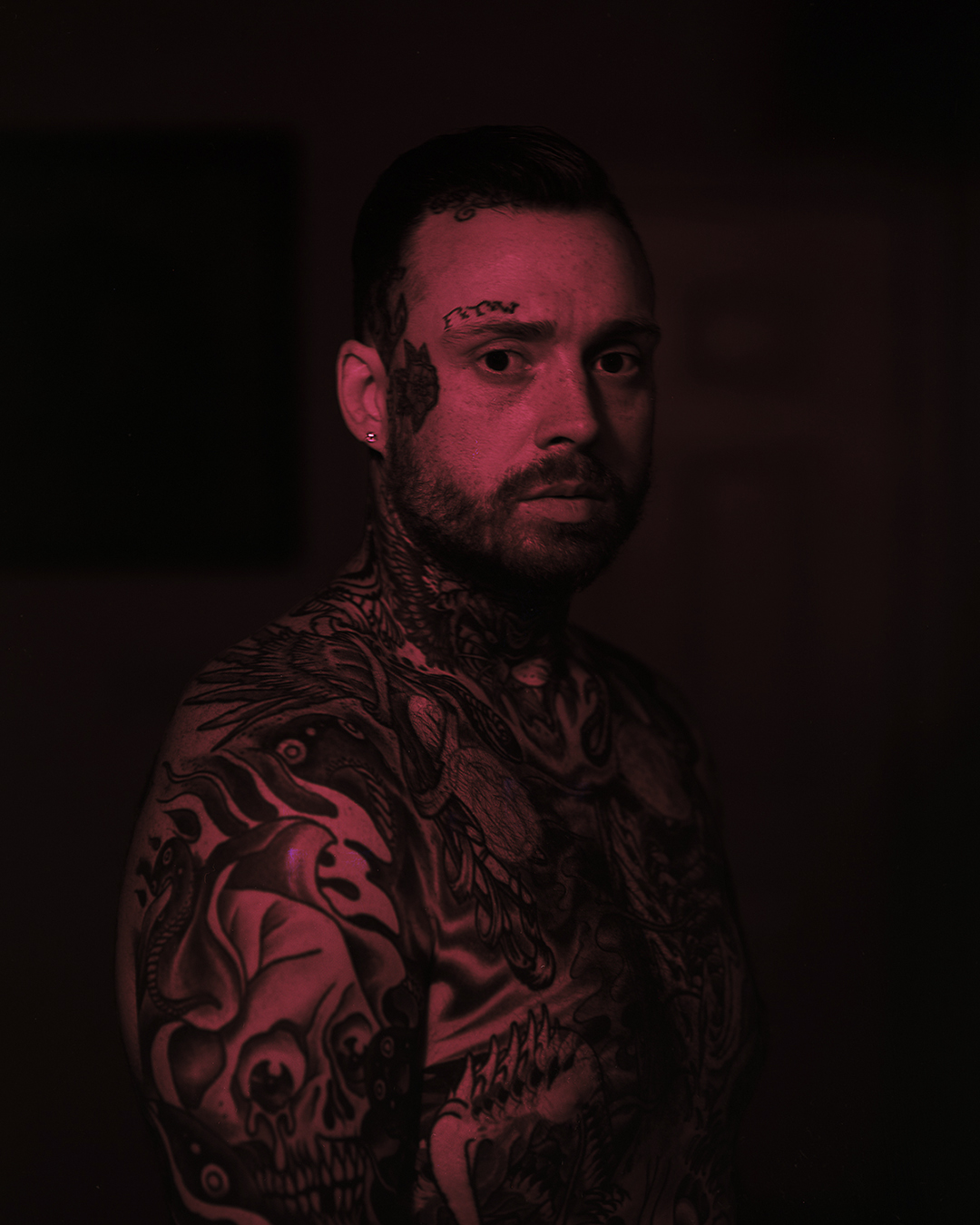 DS: The subject’s expression in Ry Ry is voluminous: he looks scared, defiant, like he’s worried about something off camera all at once. I love the way Walker Evans’s portraits situate the viewer as the one being watched, and I feel that way here too. The red light is soft but huge; it registers a world of vice. And I love the way the tattoos maneuver in and out of the darker tones of the photograph, especially with the earring shining out. How do you approach these portraits?

MS: I think we share a similar love of what that tactician Evans was able to do. The real reason I use such a ridiculous camera is I became infatuated with being in front of large scale photographs that made me feel more the observed than the auteur. My favorite photographs have always given me this feeling that I’m a participant in something I can’t control. I’m not dissecting something; I’m front and center being confronted by a subject. When I shoot portraits, I don’t know, it’s this strange headspace I go into that’s totally reactionary. It sounds so god damn pompous but the honest truth is I get so excited I like half black out. I have to stop when it’s all done and make notes of all my technical settings because I just go autopilot, and I’m so wrapped up in the process I go somewhere else. I think the greatest compliment I’ve ever received from a person was the admission that when I was shooting their portrait, they became so wrapped up in my crazy ritual that it really allowed them to feel like they no longer had a camera aimed at them. Once in awhile you get that connection with someone and it’s like shitty champagne on a flaming roller coaster; you have to sit down and smoke two cigarettes afterward just to stop smiling. Nothing feels better than that weird little space in time you’ve created.