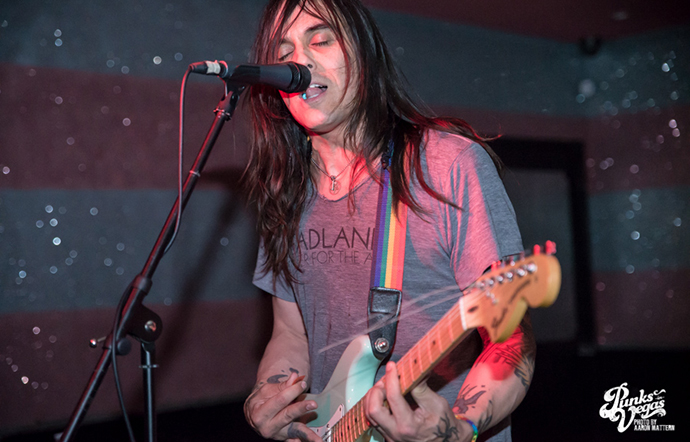 There’s probably a pretty slick, pretty terrible “jack of all trades” joke to be made here, and there’s an endless number of reasons why I refuse to make it, not the least of which is the fact that Jack Dalrymple—you can ask anyone who’s followed punk rock for the last twenty years—is a humble and reluctant master of many trades in the genre.

As frontman for street-punk trio One Man Army, he released one of the best punk records of the last twenty years, 2000’s Last Word Spoken. As a member of the scrappy four-piece Dead to Me, Dalrymple’s croony vibrato and down-stroking guitar work created an unlikely counterpoint to the band’s politically heavy and propulsive songwriting. Unsurprisingly, Dead to Me released a breakout first record and followed it up with one of the best punk short-players of the last decade, 2008’s Little Brother EP.

Dalrymple has since played hired gun for one of the longest-running bands in the business, Swingin’ Utters, and—surprise—helped write and record one of the best records of their career, 2011’s Here, Under Protest. He’s maybe the closest thing punk rock will ever have to a widely respected hitmaker. Dalrymple’s new band, toyGuitar, plays a stripped-back style of California surf-punk noir that’s already turning a lot of heads following the release of their first LP, In This Mess. I asked Jack six questions while toyGuitar is out on the road in the US and Canada. —Danniel Schoonebeek

Danniel Schoonebeek: You occupy an interesting place in punk rock: more than a few times I’ve heard it said that you’ve got one of the best voices among musicians working today, but you also shift around a lot, whether it’s One Man Army, Dead to Me, Swingin’ Utters, and now toyGuitar. Do you consider yourself a restless musician? And can you talk a bit about how toyGuitar differs from past work?

Jack Dalrymple: I always feel like my voice is terrible. And I think I get restless just like anyone else. I hadn’t really looked to move around so much. Chemistry, other members, their lives, all that stuff happens. Sometimes life moves you whether you’re ready or not. One Man Army had run its course for me, personally. I know that was really hard for some of the others involved, but it opened the door for me to play in one of my favorite bands, Swingin’ Utters. I also started Dead to Me right around then. Those times with DTM were truly special. It ended with me before its time I feel, but maybe that was a good thing for them. I had a son, so I took some time to just focus on being a dad. Then came toyGuitar, which I absolutely love. It’s a little different from the previous stuff I’ve done, it’s based mostly around the people involved. Everyone writes. We all call bullshit and we’re all super, super close. No expectations and no pressure makes the whole thing feel really fresh.

DS: The vocal attack on In This Mess is a departure from your previous records, there’s an Eddy and the Hot Rods thing happening, and strangely it also brought Mark E. Smith, from The Fall, to mind. How has your singing evolved over the years, and whose vocals really surprise you these days?

JD: (Laughs). It’s almost a “lack of vocal attack.” On a lot of the songs I’m singing pretty behind, late and lazy. I’ve never had lessons of any kind, so honestly I don’t know what the fuck I’m doing. I think me getting better or having evolved is debatable. Singing-wise, who do I listen to or am inspired by a lot these days? Definitely Sasha from the band Massanger, and anything by Sheer Mag.

JD: My wife is an amazing artist, she’s a crazy tattooer and painter. I’m constantly inspired by her. Having a son that’s surrounded by art, in the middle of San Francisco, amidst these tech companies that are making it next to impossible to live here, is really all the inspiration I need.

DS: You’re on tour right now, helping to support the twenty-five year anniversary of Fat Wreck Chords—what do you think you’ve learned about the country over the years, riding in vans and buses, back and forth and from city to city?

JD: I’ve learned that it’s OK to sometimes wear shorts in the van. I’ve also learned, if you don’t have anything nice to say about particular places, say nothing at all.

DS: One thing that I think has always set your songwriting apart, even as early as One Man Army, is that you always give priority to the songwriting, you’re not trying to being the loudest or the fastest band in the room. What’s your sense of songwriting as an art form?

JD: I really just try to keep the writing honest and make sure it continues to come from a place that’s relatable. I do always try to be the loudest guy in the room, though—just ask Miles [Peck, fellow toyGuitar guitarist]. Songwriting as an art? It’s one of the oldest forms of creative expression. It’s telling a story in a way that makes you remember times, places and people. It invokes so much emotion.

DS: Lyrically you’ve always shown interest in love gone wrong, though they aren’t blues lyrics and you’re not writing torch songs exactly, it’s more like snapshots of people who are down and out, dead-end stories, as you call them. You said recently in Rolling Stone that the chorus to “Worlds Between Us,” “Nothing’s gonna happen to us,” came from your son singing to you. What’s the lyric process like in your work now?

JD: It’s the same really. The only thing that’s changed a little are the surroundings. I have a son and a wife now so, from a lyrical standpoint, I tend to focus more on this world and the people my son gets to grow up with. He had written a song about how nothing bad could ever happen to him or his family. No earthquakes, no tidal waves, no asteroids. He kept singing “nothing’s gonna happen to us,” so I took it to mean that he felt safe and loved but also that he sees no color, no motive, and sees only the good in people. It’s innocence and beauty. His inevitable realization about the way things really are will be hard and sad to watch for me.

ToyGuitar is Jack Dalrymple, Rosie Gonce, Paul Oxborrow, and Miles Peck. Their latest release is 2015’s In This Mess. The band is currently on tour in the US and Canada.