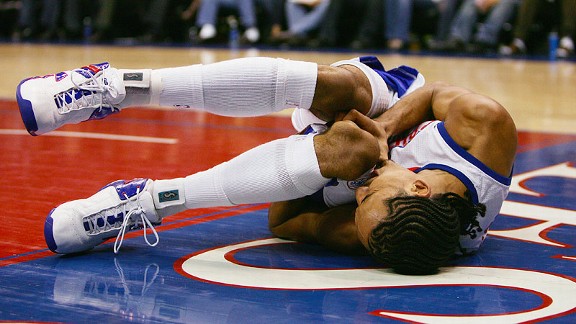 The fact that Livingston’s injury comes up twice is telling, since generally, only the injury-prone (Brandon Roy, Greg Oden) get multiple nods to their bruised and battered limbs. But in special cases, the player’s true claim to fame is the violence, the sheer torture-porn gore of their most unbecoming moment.

Once, Livingston was a potential star in the NBA. At 6’7 with arms that stretched roughly as long as Shaquille O’Neal is tall, his court vision and ability to play point guard were intriguing attributes. He could throw a no-look pass as easily as he could rise above the rim for a crushing dunk. And although his first two seasons were a little disappointing, there’s certainly reason to believe that — before Google could sum him up in four non-sequitous phrases — Livingston was going to be a special basketball player.

It was Livingston’s wingspan that got him in trouble. February 26, 2007, a road game between Livingston’s Charlotte Bobcats and the then-lowly Los Angeles Clippers. An underthrown pass presented itself early in the first quarter, and Livingston used his inhumanly long left arm to reach in and start a fast break. He raced down the court and rose for a layup, but he was undercut by his defender and tossed the ball off the backboard. His legs splayed out as he tried to catch himself. Then, without warning, his left leg gave out completely, buckling horrifically outward. His thigh continued to point straight ahead. His knee, angled 90 degrees to the left, hit the floor. (I’m including a link, but be warned: The injury is awful).

Doctors would later inform Livingston that his leg might have to be amputated. The damage was almost unfathomable and reads like a medical textbook: He obliterated nearly everything in his knee, tearing the anterior cruciate ligament, the posterior cruciate ligament and the lateral meniscus, badly spraining his medial collateral ligament, and (perhaps most damaging) dislocating his patella and his tibia-femoral joint. Essentially, all of the body parts which hold a knee in place were in tatters, and Livingston’s knee was accordingly roaming free.

Livingston writhed underneath the basket. This was perhaps the most disturbing image — worse, even, than the annihilated kneecap. He couldn’t stand, and the microphone on the basket, which usually captured the aesthetically pleasing swish of a jump shot, captured instead Livingston’s primal scream, his frightened moans, his howls of “Ah god ahh godDAMMit.” Instead of the thunk of a big dunk, the microphone captured the hollow silence of the crowd and the frantic athletic trainer shrieking “Get the paramedic!” The trainer, schooled on how to deal with sprains and cuts, could only throw a towel over the leg so that the camera couldn’t capture it and was no better suited to help Livingston than the rest of us. At that moment, we weren’t hoping that Livingston could get up, that he would be able to walk it off, but rather that his pain — which, with every scream, was becoming increasingly our pain — would be reduced and that he could keep the leg.

The anterior cruciate ligament is the most oft-discussed connective tissue in the human body when sports are involved. An injury to the ligament is damaging enough to force a collective breath out of the online sports community — when Chicago Bulls point guard Derrick Rose was famously “holding on to his knee and down,” it was like an invisible hand pushed down on every basketball fan’s stomach at once. Rose couldn’t walk, and while he couldn’t walk, no one could breathe. We were breathless, in part, because a healthy Rose could also leave us gasping for oxygen. To imagine Rose hurt was difficult; to imagine him returning the next season restricted seemed oddly blasphemous.

This is ironic, given that a healthy ACL’s main purpose is to restrict. Ligaments keep bones in place, and the ACL restrains the shin bone. By preventing the tibia from sliding forward, the ACL helps keep the knee joint in place. Without the ACL (and the MCL and the PCL), the knee joint would be prone to dislocation. ACL injuries used to spell the end of an athlete’s career, or at least the end of his or her athleticism. Tim Hardaway, once one of the best point guards in the NBA, lost much of his explosiveness and was never the same post-injury.

Technology has evolved. Medicine, surgery and rehabilitation have taken much of the long-term damage — if not the stigma — away from ACL injuries. But the recovery time is long, and as Rose’s recent meniscus injury poignantly reminds us, there’s no guarantee that the rest of one’s body will come back from an ACL tear healthy.

Livingston’s injury was startling in a lot of ways. Primarily, of course, the grotesque — watching the human body do inhuman things is quickly becoming the norm in movies about demonic possession. Livingston’s knee, briefly, became Emily Rose.

But it was also disturbing in its simplicity. This was not an abnormally muscular young man skying above the rim and coming down wrong as a result of unnatural athleticism. This was simply a botched layup attempt, a 25-times-a-day staple at the local YMCA. Anybody can land awkwardly. Why couldn’t anybody’s knee do what Livingston’s did?

Basketball players seem to exist in a plane above ours. They are stronger, tougher, faster, richer than us. Their aches and pains are lesser than our aches and pains, and since they are so well compensated, armchair analysts imagine that players should grin and bear their pain in a way that doesn’t get in the way of the entertainment value. “Get in there and take a charge” is an oft-repeated phrase by men who underestimate the pain of being knocked to the floor by Blake Griffin’s knee to the chest.

Livingston’s injury, followed by his raw-throated screams, could not be explained away. There was little (if any) complaining about how Livingston “signed up for this.” The injury was jarring, but it humanized him in a way which some fans tend to avoid when thinking about basketball players. It was a death of innocence, to a certain extent, but it was also (perhaps) the death of an ignorance, as well.

Shaun Livingston plays for the Brooklyn Nets now, the most disappointing team of the 2013-14 season to date. Considered a championship contender before the season began, the injury-riddled Nets are 3-10. Livingston, who was supposed to be the first point guard off the bench, has been thrust into a starter’s role in the absence of Deron Williams. He has been unremarkable (8 points and three assists per game), at least as far as someone who once nearly lost his leg continuing to play professional basketball can be unremarkable. Which, of course, is to say Livingston has been very remarkable.

A week ago, Livingston dunked. Playing at home against Portland, Livingston got the first step on Trail Blazers guard Damian Lillard, rose into the air and stuffed the ball through the rim over Robin Lopez. The play carried little of the violence of Livingston’s injury and none of the long-term significance (the Nets would go on to lose the game). But the rim microphone went “thunk,” the crowd roared, and the announcers screamed “Rack attack!”, and even though Livingston will never be a star and his Google search suggestions will always be highlighted by pain, it felt like a hell of a moment — and not an unbecoming one — for a player whose youthful athleticism shattered with his knee six years ago.